Why name a building for Susan Thompson? 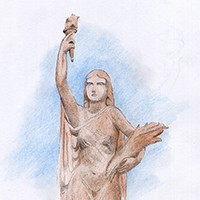 City council has voted to rename an administrative building in honour of Susan Thompson, Winnipeg’s first female mayor who served from 1992-98. While recognizing firsts is a valiant act, those who break barriers should be appraised based on the full scope of their contributions, good and bad.

The press release sent out by the city emphasized that this renaming was a significant event as it also marked the 100th anniversary of what they call “women’s first right to vote in Canada.”

The release does clarify “that not all women won the right to vote on that day,” but this acknowledgement doesn’t make up for the erasure of the links between the suffrage movement in Western Canada and the ongoing project of colonization. Granting the vote to settler women was seen as strategic in legitimizing expansion in the West.

And in the present moment, the question of why we are specifically celebrating the achievements of one mayor remains. Is it because she was the first female mayor or because she was a good mayor overall?

City representatives credit her with re-organizing city hall and initiating “the implementation of the current administrative structure still utilized more than two decades later.” In a Winnipeg Free Press article from 1998, Brian Cole explains that this involved breaking up the “old boys network” of civic politics.

But while these changes were overdue and haven’t been challenged since, can they be defined as unilaterally positive? The reorganization of city hall was also been seen as a consolidation of power in certain positions, and Thompson’s governance model has also been described as “autocratic and demanding.”

Beyond the machinations at city hall, tracing the impact of Thompson’s tenure on the day-to-day lives of citizens is a path that leads into mucky obscurity.

She was credited with developing infrastructure to support the 1999 Pan Am Games, yet she also promised to reopen Portage and Main before those same games – a promise which didn’t materialize. Thompson was mayor through the 1997 Flood of the Century, and it’s been said that she handled it well.

In a 1998 Winnipeg Free Press retrospective on her time as mayor, Cole reflects that she was “often pummelled in the media for going too far in cutting costs.” Members and affiliates of the now-defunct advocacy group Cho!ces gave her the nickname “Susan Scissorhands,” reflecting the same tendency towards making cuts to public services.

However, these seemingly smaller mayoral decisions – which tend to have direct impacts on the more marginalized members of our community – are more likely to fall through the cracks of history and record-keeping.

Being the first female mayor is an achievement. But in choosing who Winnipeggers celebrate through named buildings, there should be clear justification of why we’re granting them this honour.

In any appraisal of past events and heroes, it’s important to not lose sight of the nuances and failures of figureheads and political movements. Naming buildings to mark the centennial of a whitewashed version of voting rights may be a feel-good move for politicians, but doesn’t contribute much to our civic discourse and collective history.

Anastasia Chipelski is the managing editor at The Uniter.