Whose House? Diana and Michael’s house.

For visual artists Diana Thorneycroft and Michael Boss, it isn’t always easy to keep work at work. Despite the fact that both artists have studios, their Wolseley home is still pleasantly overflowing with art supplies and works in progress.

“I’ve been doing a lot of sculptural stuff that requires baking in the oven,” Thorneycroft says. “I don’t have an oven in the studio, so I’ve been working from home a lot.”

Boss’s religious artwork, both original and collected, is so copious that it takes up two rooms of the home. He affectionately refers to them as “the upper Jesus room” and “the lower Jesus room.”

“When my daughter was 16, her friend came to visit at our old house,” Boss says. “We had all of the religious stuff in one room, and as he was sitting there he said, ‘There’s a whole lot of Jesus in this room!’ So we dubbed it ‘the Jesus room.’”

Thorneycroft says they’ve always felt a special connection to the house in which they’ve lived for a decade.

“We lived a block away,” Thorneycroft says. “Michael’s daughter was moving in, and we needed more space. We thought we’d move the next summer, but the open house was happening and I said, ‘Let’s check it out.’ I walked in the door and before I saw anything I said, ‘Let’s buy it.’”

1) Dolls DT: “These dolls are of me and Michael. A student made them for us.”

2) Altarpiece (lower Jesus room) MB: “I see my role as kind of rescuing these things, these icons and artifacts. This was from a church around Selkirk. It’s one of my prized possessions, for sure.” 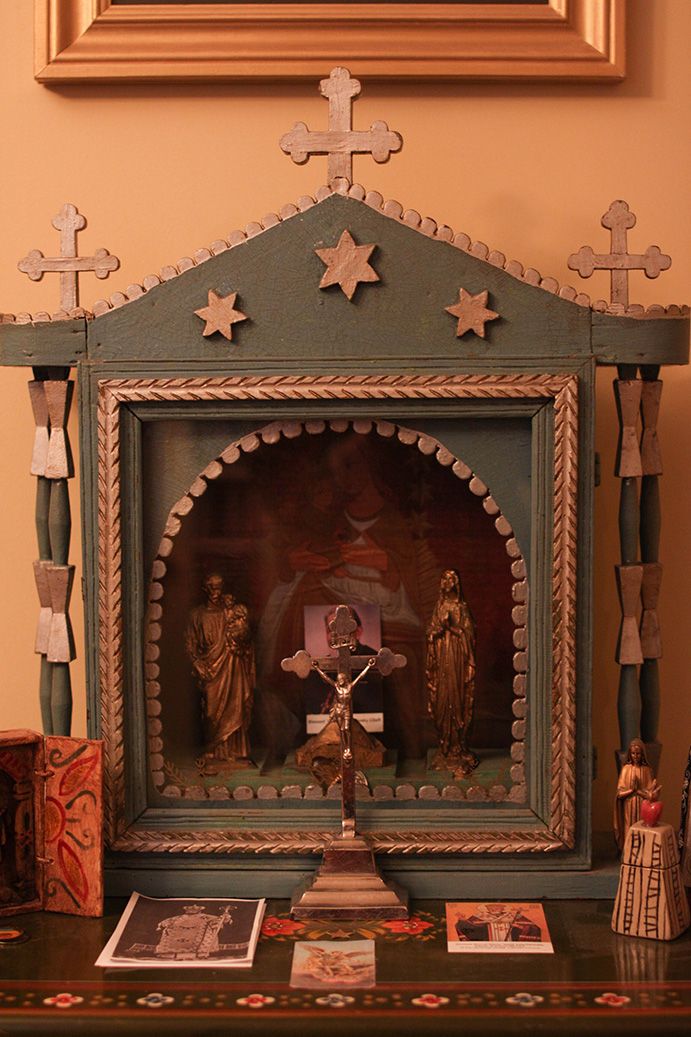 3) Pope statue DT: “We’ve had some poltergeist activity in the house. It’s positive. We talk to it. Even though that pope is on a stand, it took a leap and flew off. This stuff happens and we just say, ‘okay.’” 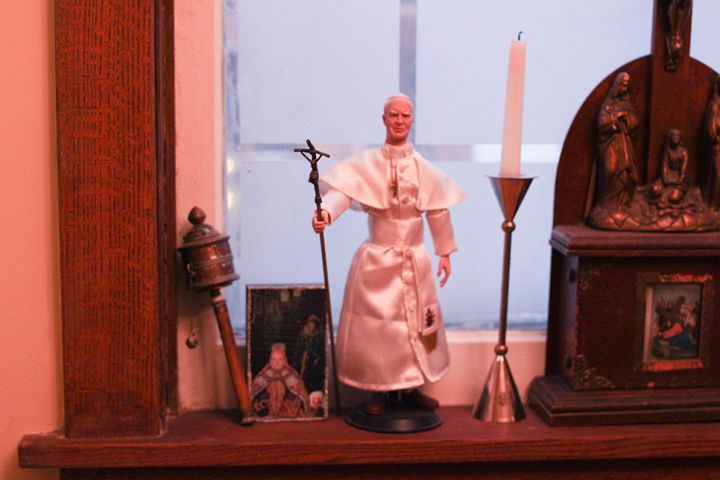 4) Scythe MB: “I took my father out to the land where our ancestors settled in Rossdale, Man. We were going through the old barn and he said, ‘Oh, look! It’s my dad’s scythe!’ It was laying in the dirt. I had to have it. All I had of my grandfather were old photographs. This has his DNA all over it.”

5) Antique gospels (upper Jesus room) MB: “This is from Ukraine. It was printed in 1890. It used to belong to a church in Saskatchewan. I saw it at an antique book sale, and I had to have it.” 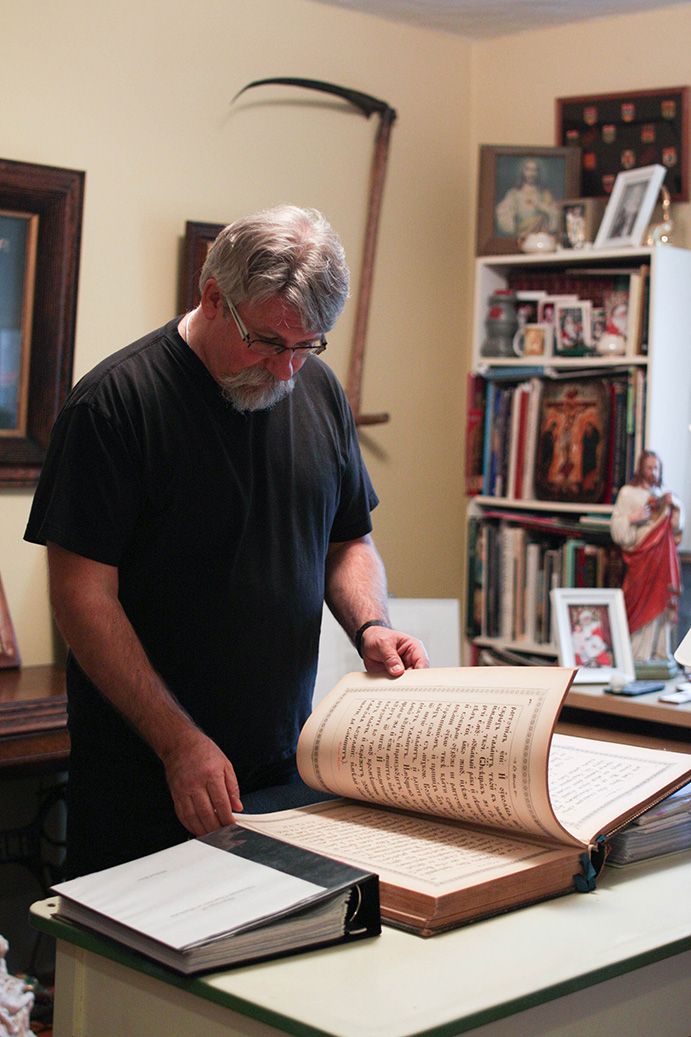 6) La La Llamaland DT: “Summer before last we had some French artists here working as interns. They started making these llamas with our granddaughter, who was five, and she just kept making them. When the Box Gallery opened up, she and I applied to do this piece. We each made llamas. I drew one wall and she coloured it, then she drew the other wall and I coloured it.” 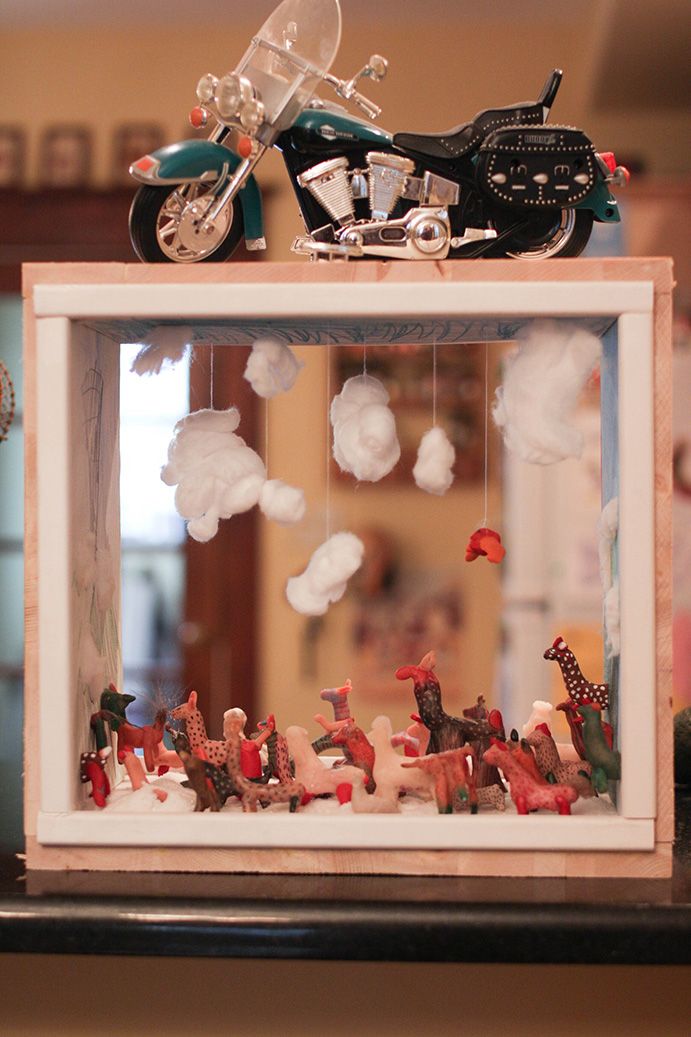 7) The Twins DT: “This is by Ottawa artist Jonathan Hobin, from his series In the Playroom. I bought this photograph and it was in my parents’ house in Ottawa. When my dad was selling the house, a potential buyer was visiting and demanded my father take it down. Hobin is a controversial artist because he uses children in his photographs. This one is obviously about the Twin Towers, but he did one about Abu Ghraib, one about Jonestown, stuff like that.” 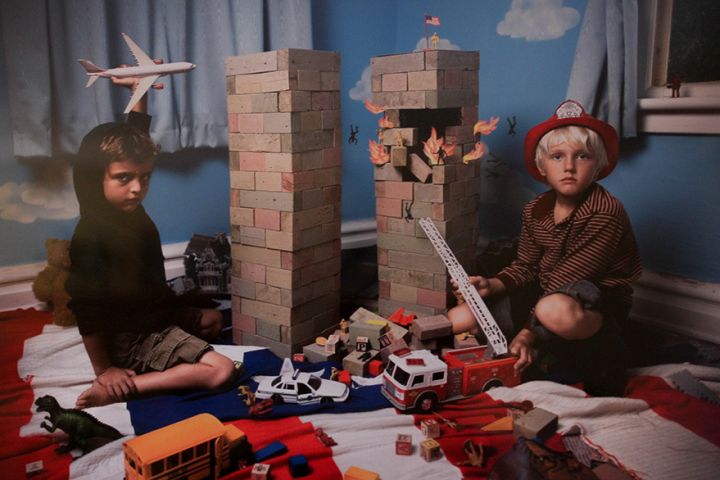