Whose House? Chloe and Daniel’s House!

“Should I go first, or do you wanna go?”

“You’re the queen of the castle.”

This castle is relatively new for this Winnipeg power couple. Triple-threat artist/curator/administrator Chloe Chafe and her partner, multi-instrumentalist and local folk icon Daniel Péloquin-Hopfner, just moved onto a quiet street in St. Boniface this spring.

“It’s the first time we are able to work with a blank canvas,” Péloquin-Hopfner says. When asked about the space’s theme, his answer was “collaboration.”

The move happened at an opportune time professionally for both of them. Chafe’s brainchild, Synonym Art Consultation (co-parented by Andrew Eastman), had found a home base of its own. Péloquin-Hopfner is one-third of progressive folk trio Red Moon Road, and the bulk of his instruments sleep at the band’s rehearsal space.

The couple had an opportunity to create a sanctuary.

“We want to have one place that’s grounded and sort of makes sense,” Chafe says.

“Because we are not at all, so it’s just, like, kind of an illusion,” Chafe adds.

They both live in celebration of aesthetic. Luckily, the aesthetics they celebrate are complementary. Their walls are carefully . curated, though much of their art lives in the closet. Windowsills draped with greenery and windows full of trees bring them a little closer
to rural comfort.

“It’s been really good for our mental health and also for our creative process,” Chafe says.

Some creatives tend to name their homes. These two hadn’t yet. But when they thought about it, Péloquin-Hopfner simply answered “Home.” 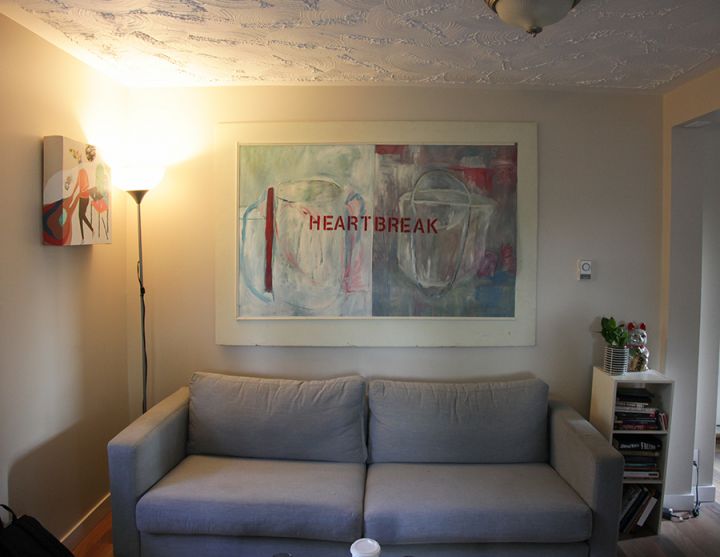 CC: “This is a prized possession that we had in our old place and this new place, and it’s a very important central piece. It’s by my aunt Susan Chafe. We always had her pieces in my house growing up, and it shaped both my personal art practice and curatorial practice. It’s very important to me.” 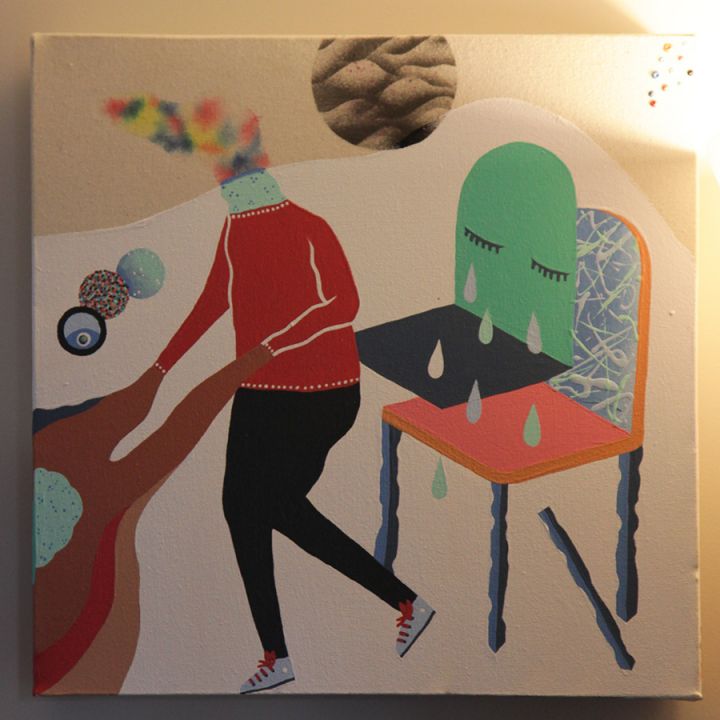 CC: “I just loved how this piece by Dany (Reede) had so many similar colours, and it clearly dictated how also this piece shaped my love for this colour palette. It looks like they’re made from the same studio.” 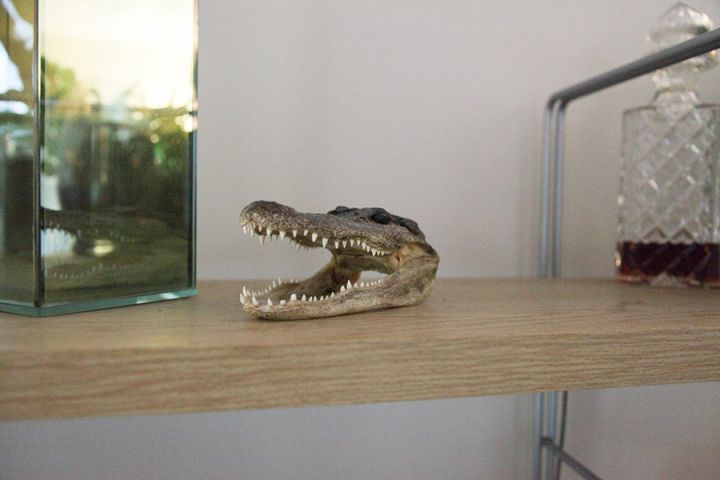 CC: “I inherited it through my brothers moving places. I don’t know anything about it, but it’s totally hilarious. It’s probably illegal if it’s real.” DPH: “Cold blood, warm meal.” 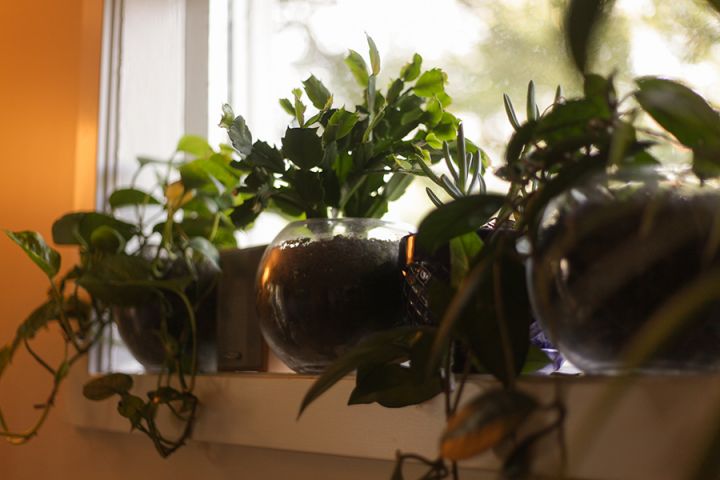 DPH: “I find it to be a little meditative also. Just having something to care for that also requires a great deal of patience. Sometimes, you can easily kill a plant if you’re over-caring for it as well. It’s just a matter of kind of remembering to water but also just be
attentive and give it space.” 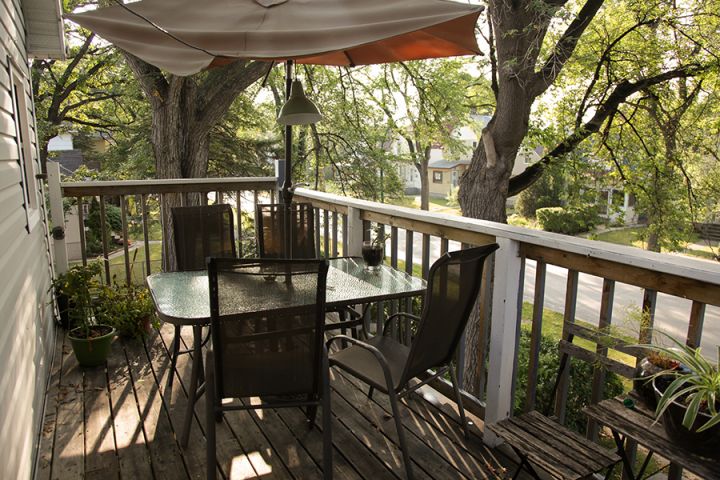 CC: “Andrew (Eastman) and I have been working out here like crazy, especially because of all the construction at Garry Street (Coffee). It’s amazing, especially from going into very densely populated zones like West Broadway and River Heights where Daniel was. Just being able to have this openness – that’s very important.” 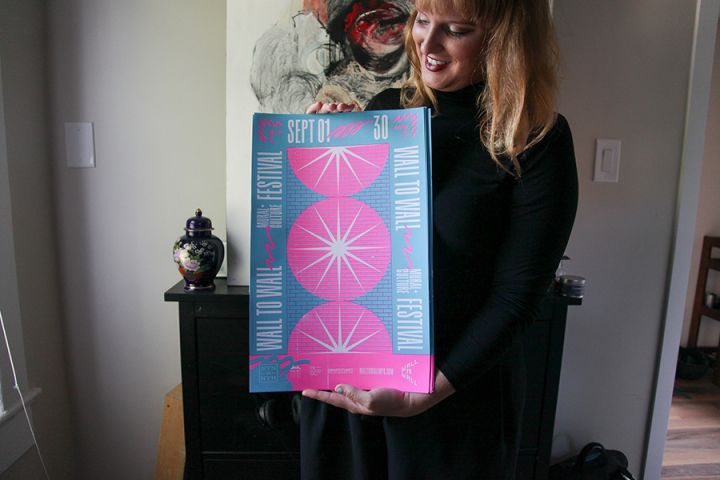 CC: “Look how cute these are! The kids did them! An adult designed it, but they screen-printed them!" 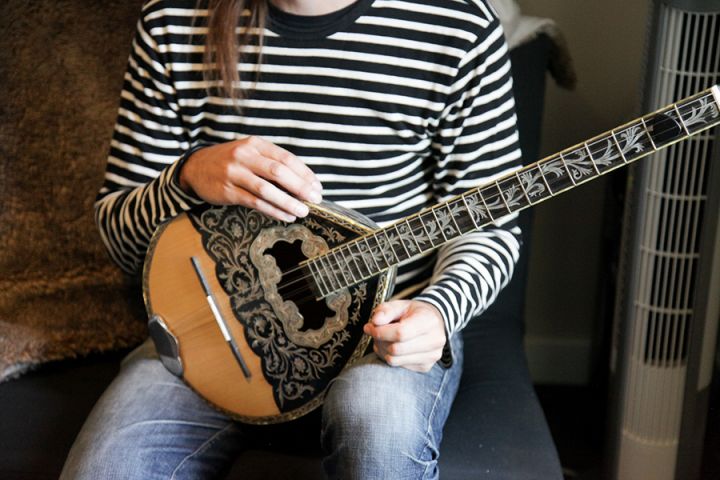 DPH: ”I found it on Kijiji in Edmonton! Guy
there was selling it for 5K. I messaged him anyway just to see if I could play it, even though I couldn’t pay it. He said “Yup. I know who you are, and your band is great. How about you tell me how much is in your pocket.” I was like, “I’m not gonna insult you with $240.” He was like “What about $200?” So we met up, I played it a bunch, gave him free passes to Red Moon Road shows for life and left for Winnipeg that same day. His dad was the Canadian ambassador to Turkey from 1930 to 1936. (He) bought it from the builder during a trip to Athens in 1934/35. It needs some neck joint repair … Haven’t found the right luthier yet.”