Barbara Bruce introduces herself in Cree. Her name is Kitchi Pinesiw Piminaw (Flies High Thunderbird), and she is from the Ma’iingan-doodem (Wolf Clan).

She started in the 1970s when she began working at the Manitoba Metis Federation after a stint at the University of Winnipeg.

From taking over the Manitoba Legislative Building with her peers in her youth, Bruce found her life’s purpose in nurturing and advocating for the local and national Métis, Indigenous, Inuit and Two-Spirit communities.

Bruce was recently awarded the Order of Manitoba for her efforts and achievements.

Amidst her work in activism, she ran an art gallery dedicated to First Nation, Métis, and Inuit art and handcrafted goods for seven years.

Works by Daphne Odjig, Norval Morrisseau and many other Indigenous heavy-hitters passed through the Northern Traditions gallery. Some of it made its way into Bruce’s own collection.

The St. Vital townhouse she and her partner have lived in for the last two-and-a-half years is overflowing with brilliant pieces. Each painting and sculpture has its own story.

“When people want to come into our space, we want them to feel beauty, so they feel beauty inside of (themselves). That’s what we want to create,” Bruce says. 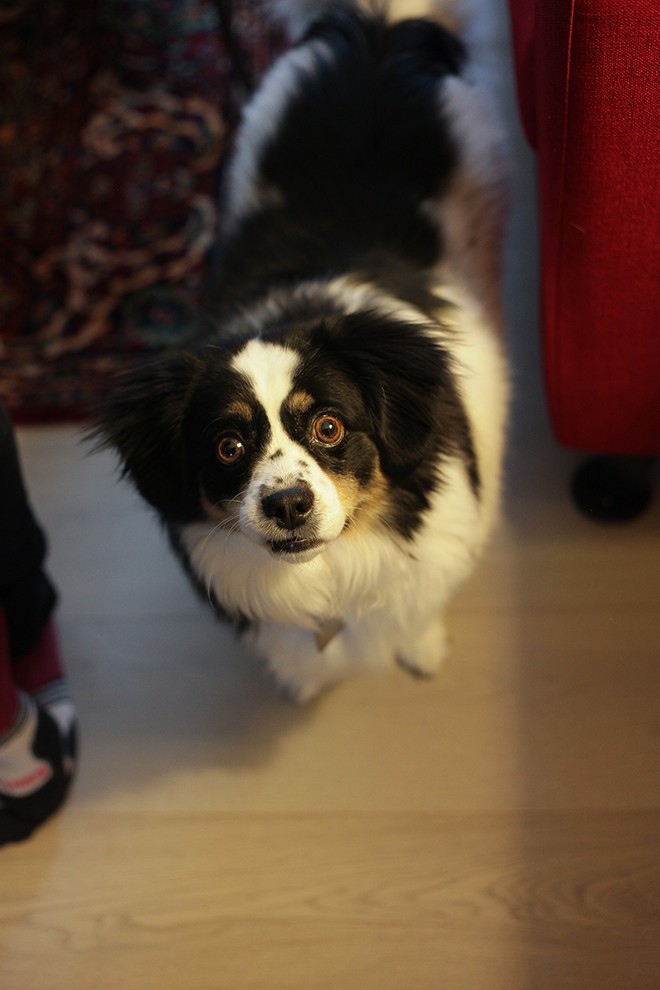 “We tried different names for her. Notice, I’m surrounded by cedar. We tried sky, storm, and then we said "cedar" and she (perked up).” 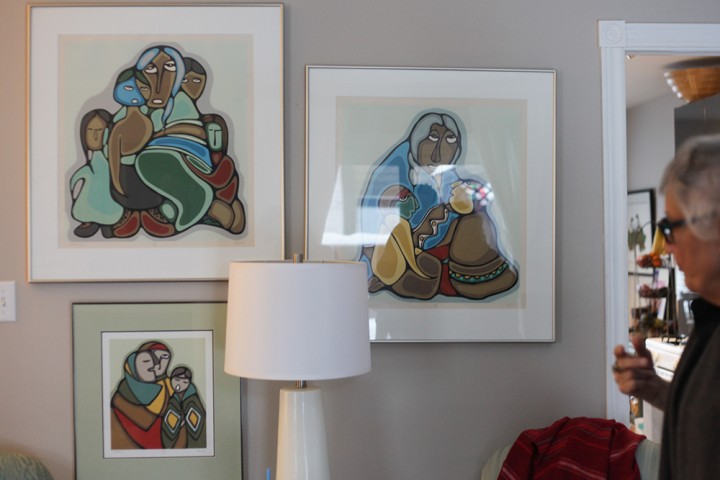 “This art here is by Daphne Odjig. She’s Odawa-Potawatomi. She was just a powerful woman but so incredibly gracious and welcoming and with that smile and just very kind and so full of respect. When we first started our store, we bought these. The two big ones have sisters to them. It’s a set of four. My business partner has the other two. The story is that if I go first, he’ll get these two, and vice versa.” 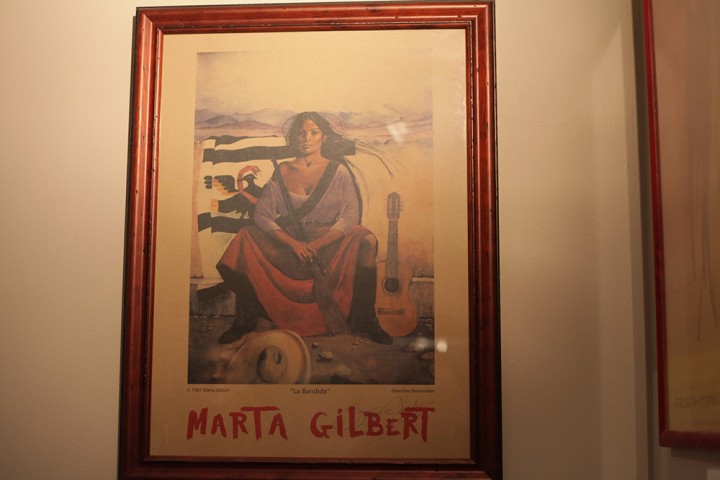 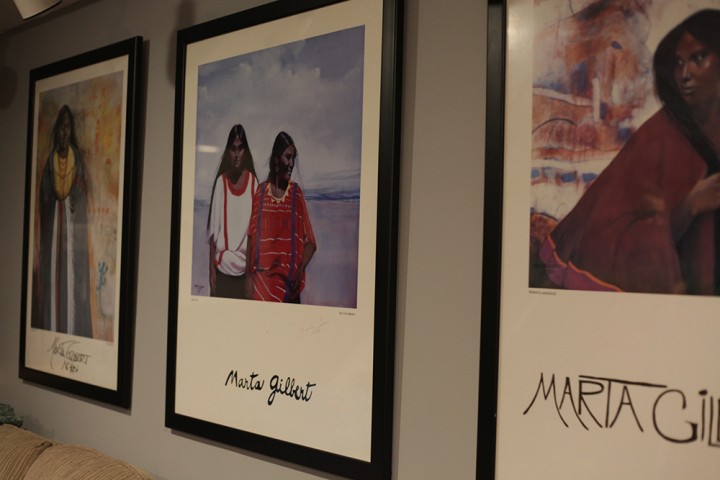 “When we are in Puerto Vallarta, we like to go visit art galleries. We walk into this gallery, and who walks in? It’s (Marta Gilbert). She’s from California originally. She’s Cherokee and Osage. She walks in, and I’m just going crazy. She looks at us – she just looks right through you – and our eyes went, ‘Oh my god, this woman is on another plane.’ Her originals go from US $5,000 on, so what we decided to do – which was more reasonable – was to get some prints, and we asked if she could sign them, and she did. They’re all signed. We were so fortunate. She loved us.” 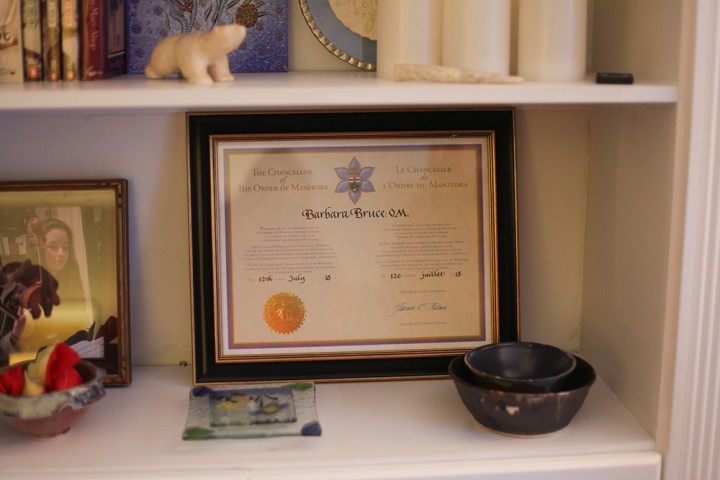 “In 2018, I was awarded the Order of Manitoba. I have this big medallion that I can wear now. Very official.” 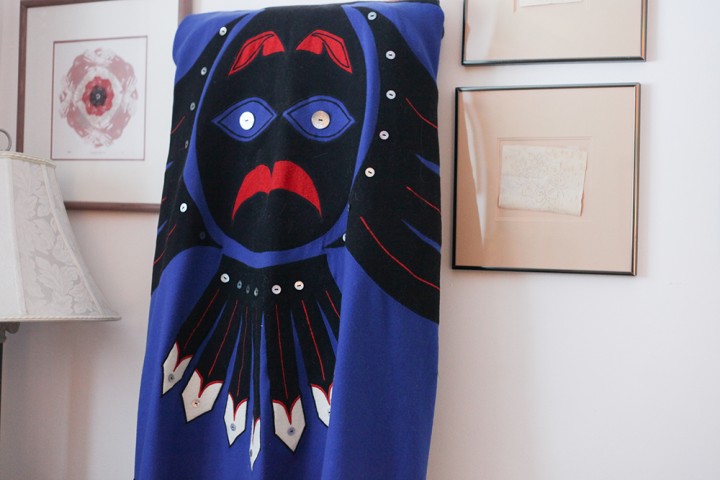 “This is a West Coast blanket that was given to me. It’s a thunderbird. That’s my name. I don’t know how to explain it, because I don’t know the culture there. I was just honoured. It’s got seven feathers.”