What is the price of artistic perfection? That’s the central question at the heart of Whiplash, the new drama from writer-director Damien Chazelle (Guy and Madeline on a Park Bench). This semi-autobiographical picture is a visceral one, balancing precise technique and animal ferocity. The result is a gorgeous gut-punch of a movie.

Miles Teller stars as Andrew Neyman, an ambitious jazz drummer attending the prestigious Shaffer Conservatory. He comes under the tutelage of conductor Terence Fletcher (J.K. Simmons), an instructor who’s known for producing the country’s best musicians. Fletcher takes the drill-sergeant approach to his teaching, inflicting verbal and emotional abuse on his students as a means to achieving greatness.

Whiplash, like much of Teller’s recent work (including Spectacular Now), has firmly cemented the 27-year-old as one of today’s best working film actors. He isn’t a showy chameleon. His voice and physicality are essential to every role he plays, but I’ve never seen him play the same character twice. The kind of drumming he does here can’t be faked, and it’s a physical achievement on par with Natalie Portman’s dancing in Black Swan. Simmons brings to life a terrifyingly calculated monster, whose teaching and abuse are so wrapped up in self-rationalization that he no longer recognizes a difference between the two.

Chazelle’s camera is always moving. He juxtaposes long takes with quick inserts, an approach that’s uniquely musical. He channels Scorsese in the best way, turning drumming into as much of a physical penance as boxing is in Raging Bull.

Whiplash’s greatest achievement is that its central question, whether or not Fletcher’s results justify his methods, is never definitively answered. I watched Fletcher and saw a monster, a bully who justifies his abuse with an absolutist view of art and music that I loathe. Others will see a well-meaning teacher whose harsh methods are the brutal reality behind great art. Neither viewer will be wrong, and both will understand why Andrew so willingly defers to his abuser. 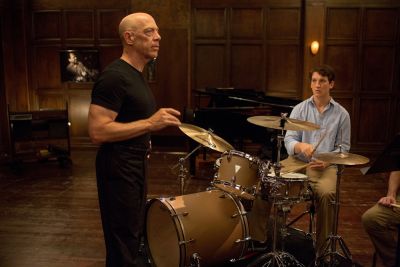