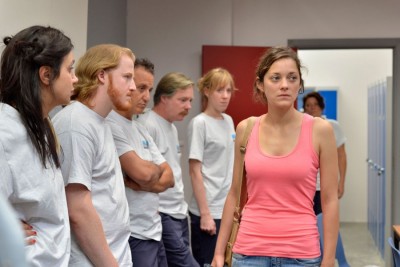 Sandra (Marion Cotillard, Inception) receives some bad news from work. Her co-workers have voted that she will be fired. In exchange, they will receive a salary bonus. However, Sandra's boss says she has the weekend to convince them to vote otherwise and save her job. This frigid act of corporate cruelty sets in motion a chain of events that will totally alter Sandra's life.

The Dardenne brothers's Two Days, One Night is a tiny revelation. It's not only a masterpiece, but also one of the most emotionally engaging films I've seen in ages.

The burden of making a living to support your family can be a hefty weight. Sandra's happily married with two children, but has suffered from crippling bouts of depression. Her possible dismissal also rekindles long dormant flames of self-loathing. Writer-directors Jean-Pierre and Luc Dardenne's careful attention to detail and nuance help deliver scene after scene of heartbreaking naturalism. In many scenes, Cotillard acts against untrained, unknown actors to a truly astounding result.

It would have been so easy to make Sandra's co-workers into hateful, villainous caricatures. Instead the Dardenne brothers portray them in a dozen unique ways because, not so shockingly, everyone is unique. Everyone needs that money for a different reason. Some of the film’s finest moments lie in her co-worker's reactions to her plea.

Shot in a stripped-down, neo-realist visual style, the film evokes a beautifully true-to-life feeling of identification. You eat, sleep and ride the bus with Sandra, living with her for every moment of this crucial weekend. Countless scenes bring to mind such neo-realist masterworks as Vittorio De Sica's Umberto D. and Abbas Kairostami's A Taste of Cherry.

Each reveal feels nearly magical. Plot twists that must have read rather plainly in the script jump to exquisite life as portrayed by Cotillard. Her performance is a textbook example of how an actor or actress can craft a fictional character that feels utterly genuine.

Two Days, One Night is a reminder that even the smallest stories can yield the biggest emotions.