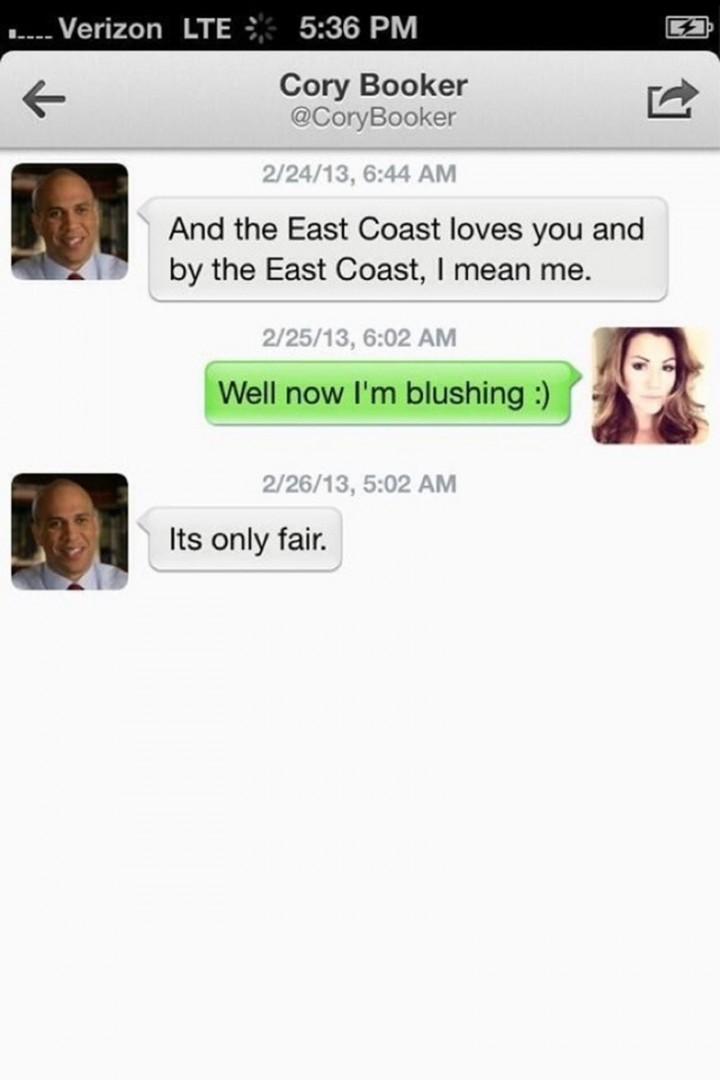 On September 25, the New York Times posted a story – lifted largely from Internet-hype publication BuzzFeed – commenting on Newark, NJ mayor Cory Booker’s relationship with Portland, OR-based exotic dancer Lynsie Lee. They’d met while both featured in a film on social media, became friendly and followed each other on Twitter. After Booker tweeted “I WILL BE President of NJ Star Trek Club!” Lee and another woman started joking about who would be the club’s ‘first lady’, with Lee upping the ante by posting a screenshot of her direct messages with Booker.

My problem is the media’s attempt to spin an ominous story out of three innocuous and tame DMs. It was the type of polite flirting which wouldn’t have been out of place in a shy MSN Messenger conversation from 2002, and bizarrely, the storyline of a salacious scandal was somehow extracted.

That Lynsie Lee is a stripper somehow transformed the story into “Not Safe for Work” by Buzzfeed’s standards, with the Times quoting that “the occasional perils of his [Booker’s] reliance on social media became apparent Wednesday.” This is absurd and offensive. Booker is single and is allowed to flirt, or even be with, anybody he damn well chooses. Lee is not some nebulous sex-bot Twitter criminal, but a consenting adult who absolutely can decide what happens with her own body. Whether you do or do not like attending strip clubs, stripping is legal in Portland.

The hypocrisy is heavy when we think of the way other single politicians are treated. Are their sex lives policed or monitored? Does it blow up the Twitternet when they have a prospective lover?

“ Of course, I should expect nothing less from the world’s hippest city since ancient Alexandria, but it seems like the kind of situation where somebody kept combining various adjectives and nouns until they found a business model they liked.

When Andrew Swan posts on Facebook about going to the Bomber game with his wife, does Bartley Kives scurry a few sections over to see just what they’re up to? Of course not: it would be intrusive, silly, and an exceptionally poor use of Kives’ time which he could be spending watching Max Hall fall down.

I accept that this story is more sensational by society’s standards than a Bomber game, but it’s not major news. The real story here is Portland. Lee works at a vegan strip club in Portland. Hello. HELLO!

Portlandia producers are quivering with envy that they didn’t think of it first.

Of course, I should expect nothing less from the world’s hippest city since ancient Alexandria, but it seems like the kind of situation where somebody kept combining various adjectives and nouns until they found a business model they liked.

Apparently, cover fees at the club are waived if you have a Kryptonite U-Lock, an asymmetrical haircut, or an old receipt for TOMS Toothpaste in your pocket.

Alt-media outlets Jezebel, Wonkette and the Atlantic Wire have all since come out lambasting the Times and Buzzfeed for their clunking, Victorian sensibilities, and I expect more to follow. Callie Beusman from Jezebel was particularly succinct in her criticism, noting “Everything a sex worker does is not automatically scandalous.” I look forward to the day when we stop marginalizing the Lynsie Lees of the world and start letting people enjoy their meatless lives.

Fabian S. is neither a mayor nor a stripper, but he is still quite fond of Twitter. He is studying education at the U of W and can reached on Twitter @thisfabians.