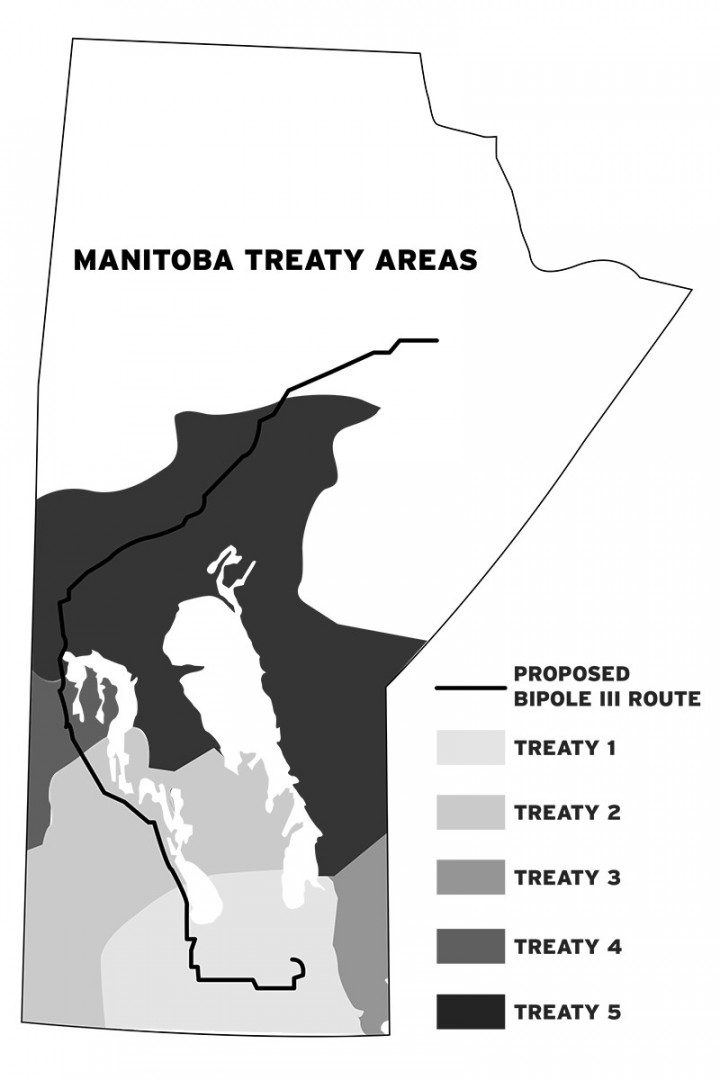 There are many opponents of Manitoba Hydro’s controversial Bipole III transmission line project, a 1300 km right-of-way that would run from Gillam towards The Pas and then down the west side of Lake Manitoba and back to Winnipeg.

The Provincial Government, on the recommendation of the Clean Environment Commission (CEC), recently granted a license for the proposed project – with several conditions attached.

Opposition has come in a variety of forms, but most recently by way of appeal through the court system by both the Manitoba Metis Federation (MMF), and other First Nations groups.

The proposed route of Bipole III cuts through four First Nations Treaty areas (Treaties 5, 4, 2 and 1), within which also lies regions that the Manitoba Metis Community have historically relied on for traditional resources.

In a press release from September 11, the MMF formally announced their appeal which will be filed with the Minister of Conservation and Water Stewardship.

Manitoba Hydro’s Public Affairs Division Manager Glenn Schneider contends that there was both consultation and an effort to accommodate the Manitoba Metis.

“Hydro did consult with the MMF; we got them to do a traditional knowledge study – now I think they’re claiming that perhaps that was insufficient – but I think we made an honest effort to work with them.”

As a significant part of the consultation process, the traditional knowledge study component has been a particular point of contention.  It has been called into question by both the provincial advisory body involved (CEC), as well as by Dr. Peter Kulchyski a University of Manitoba professor of Native Studies and an expert in the field.

MMF President David Chartrand reports that “the Clean Environment Commission (CEC) has recently noted that Manitoba Hydro had undertaken ineffective engagement with the Aboriginal communities in general and the Metis community specifically in relation to Bipole III.”

Kulchyski backs that up with his own assessment of Manitoba Hydro’s consultation effort.

“…I can say this as an expert – the quality of the traditional knowledge studies done by MB Hydro to support Bipole III wouldn’t make it to Grade 1 in Native Studies today – they were really appallingly bad.”

“ They’re going through a process that the court has mandated them to go through, but it’s not meaningful in the sense of allowing the First Nation’s or the Metis to say ‘no we don’t want it to go through this territory or this land.’

This type of neglectful behavior on the part of government and industry has been a pattern for Manitoba Metis people, beginning with the Manitoba Act, whose provisions – according to Section 31 – among other things included “a portion of such ungranted lands, to the extent of one million four hundred thousand acres thereof, for the benefit of the families of the half-breed residents.”

In a Supreme Court victory about six months ago, the MMF Land Claim case successfully argued that no such land transfer had ever been properly established, and the Federal Government was subsequently instructed to make amends and uphold its constitutional obligations.

Whereas the MMF rights stem from government obligations connected to the Manitoba Act, First Nations rights and title come in the form of the Treaties – agreements that were negotiated and signed into perpetuity in the late 1800’s.

“[The MMF] have the Manitoba Act as a sort of constitutional guarantee or recognition of their land rights. First Nations have treaties”, Kulchyski explains. “Land-use rights have been interpreted by the courts to follow a similar logic, so their aboriginal rights and the treaty rights we could say, roughly speaking, follow parallel logics.”

Regardless of the historical details of how these rights came to exist, the fact of the matter is they do, and they are necessarily bound to the founding documents of both the province and the country.

The First Nations communities that Kulchyski has been working with have also long been dealing with ineffectual consultation, as the Manitoba Hydro process happens in the form of a stranger asking questions from a checklist, and checking-off the corresponding answers.

“[It’s] kind of more like a market survey than anything that respected traditional indigenous knowledge…  And with a bias towards material culture rather than to intangible culture.” he says.

“They’re going through a process that the court has mandated them to go through, but it’s not meaningful in the sense of allowing the First Nation’s or the Metis to say ‘No we don’t want it to go through this territory or this land.’”

These rights exist in the fabric of our federal and provincial constitutions, and demand that more than just lip-service is paid to the concept of consultation, especially in relation to multi-billion dollar projects like Bipole III (and it’s related projects) which will undoubtedly, and permanently, have cumulative effects on the people in these regions that have historically depended on a healthy ecosystem for their livelihood.

Unless government and industry allow for the necessary time and effort for real dialogue and due process, and actually consider not following through on these projects as a realistic possibility, the word ‘consultation’ remains inaccurately used.