Prior to her critically acclaimed television series Girls, Lena Dunham won film audiences over with her second feature, 2010’s Tiny Furniture. Deciding to make a film at any age is bold, but at only 27 years old she proves to be especially audacious. Despite having more than a few more decades to make pictures, Tiny Furniture may be her magnum opus. It is a wonderfully crafted and thought provoking film that will greatly appeal to the youth of this generation.

Dunham’s film is about a young woman named Aura (played by the writer/director). She is a frustrated young adult who has just graduated a college in Ohio. She has no boyfriend, no job and is only recognized for an embarrassing YouTube video. She is discontent about living at home, but has no money to move elsewhere so she lives with her mother; an artist who photographs tiny furniture.

Tiny Furniture is essentially this generation’s The Graduate; both films are about indecisive characters who just received a degree, yet have no idea what to do with their lives. Both films are about a life crisis; the transition between childhood and adulthood, knowing what you want but not knowing how to get it and being frustrated at a lack of direction in life. Dunham’s film depicts our society’s need for instant gratification and demonstrates that it is quite an unhealthy attitude.

Unlike Benjamin Braddock in The Graduate, Aura is a woman-child you would never like to meet but likely have. She’s whiny, passive aggressive and incredibly moody. It’s difficult to sympathize with her, which is the genius of the film; it’s a warning against this behavior.

The film lacks a clear narrative but in this we focus on the nuanced characters and this works. Every detail is there for a reason. It flows flawlessly; even the dialogue, which could be considered acerbic, actually serves to improve the experience of truthful realism that is the triumph of Tiny Furniture. 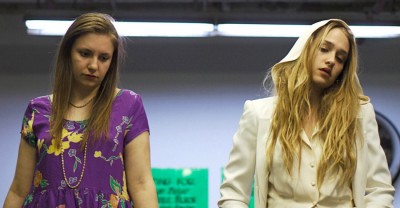