The value of play

There are a few things in life that transcend the divides of language, affluence, status and belief – a few rituals that connect groups of people on a level that words just don’t do justice. These collaborations creating unspoken bonds most often take the form of music, art, dance and sport. When our most ingrained patterns of social behavior become stripped away, what’s left?

It’s simple: nothing but play.

With the arrival of the cold, wind and snow, our only choice is to endure, and we rely on each other to do just that. We’re all in this together! So it follows that our social interactions serve to mitigate any panic about the fact that survival mode is always kept just at arms-length.

We’ve developed many tried, tested and true activities to while away the winter blues: we wear tacky sweaters, sing and dance, bitch (rightfully) about underfunded snow removal services, cheer on the Jets, share warmth with sweethearts, eat and drink with family and friends and watch films we never dreamed we’d have time for.

Most of all, though, we play.

Our most sacred form of play, developed from Canada’s longstanding winter tradition of skating, is the game of hockey. There is no stronger group expression than team play, and no team sport exemplifies this type of inclusiveness greater than hockey. Why? Because it is extremely difficult to create momentum individually, and so a unique brotherhood/sisterhood occurs when you share the ice with others. Our built up social structures that commonly divide us seem to melt away, if only for that brief moment when we do whatever it takes to achieve a common goal.

It’s infectious. It reaches a part of our identity that exists deep beneath the surface.

Those who know the game well understand this phenomenon, even if it’s difficult to articulate. And for people privileged enough to regularly be part of a team, it’s hard to contain the excitement that the experience of such camaraderie is there for anybody interested in taking part. More importantly, many recognize a need to enable those who have barriers preventing them from taking part. 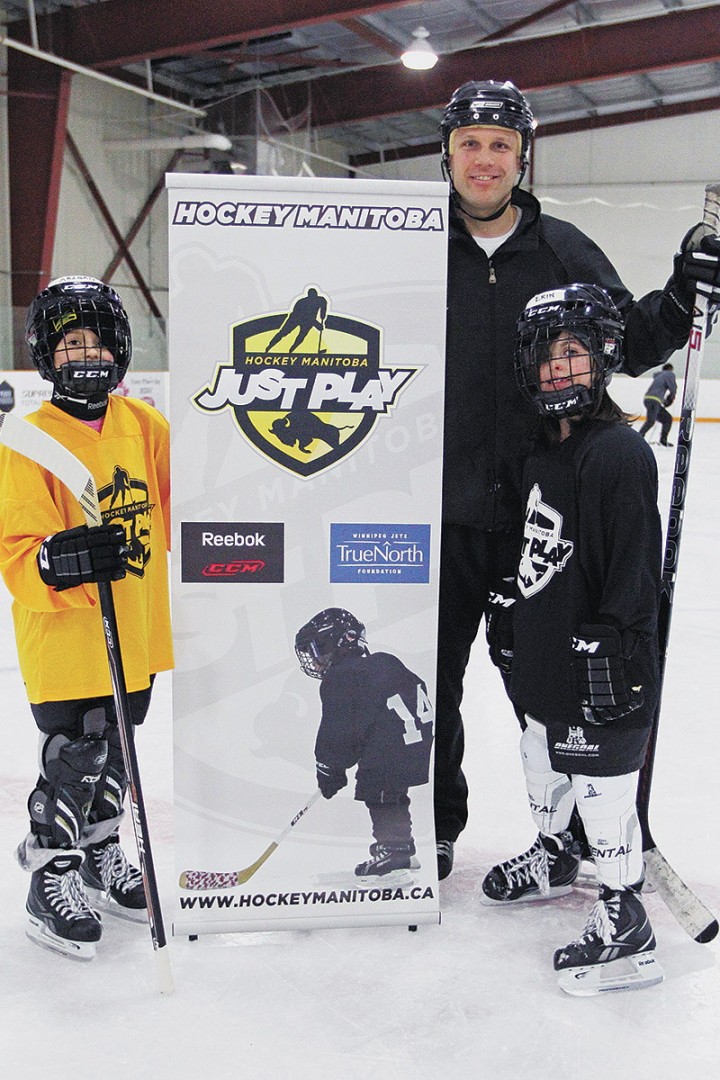 Scott Furman (pictured above), Director of Business Operations at Hockey Manitoba, understands that not everyone has equal access to the unique benefits of team play. In light of this, Hockey Manitoba launched an initiative called Just Play in 2012. It includes various community programs and available funding opportunities to level the playing field for kids that cannot afford to play hockey.

“We’re always considering how to grow the game and how to provide opportunities for every child in the province, no matter what their socio-economic status is, where they’re from, where they live,” Furman explains. “It can be a very expensive sport, and it can be difficult to get access into the sport. So, our Board of Directors met, and in conjunction with the staff, started to put forward the idea of creating a program, or an initiative that consists of a number of programs, designed to get kids into the game.”

One of the main programs within the Just Play initiative is called Hockey Discovery Days. Furman describes it as being geared towards introducing the game to new Canadians, as well as kids from neighborhoods or communities that face socio-economic obstacles preventing them from getting into team sports like hockey.

“We’ve worked with schools before, with community clubs, and we have a program upcoming with IRCOM [Immigrant and Refugee Community Organization of Manitoba]… we have about 25 kids for each program, and they’re provided new equipment that they can keep moving forward.

“We give them three on-ice sessions, we do off-ice games and fun stuff, we feed them a healthy snack, and just teach them a little bit about the game. We’ll also provide grants for those kids and those families if they should be interested in registering into minor hockey.”

For many of these kids, the chance to have a physical outlet in a safe, fun and positive environment is an opportunity they may not have very often. This experience could very well prevent a life of crime or substance abuse for youth considered ‘at risk’ by the very context of their upbringing. In this sense, programs like Just Play are giving back to neighborhoods in Winnipeg and across the province in a huge way.

“That’s what the idea was when we put it together, we didn’t want it to be just a one-off event,” Furman points out. “We want it to be a package where we really give the kids and the families and the community that the program’s being run in, the best possible chance to be sustainable, to make a difference long-term not just to have one fun day, [but] to make a difference moving forward… and really affect their lives.”

After last year’s program, one school decided to continue running the program on their own. This is the type of initiative that Hockey Manitoba likes to see, because then they are able to fund more programs for other communities and organizations.

In another instance, a 14 year-old boy who had never skated or played hockey, took part in the Hockey Discover Days program last year (they accepted him even though the usual age range is 5-12). This year, according to Furman, the boy’s family applied for a Hockey Manitoba grant, and is now registered to play hockey because of the funding process that made it possible.

The Winnipeg Jets True North Foundation (WJTNF) provides some funding to Hockey Manitoba and Just Play, as well as running its own community program known as the Winnipeg Jets Hockey Academy. Certain aspects of the program are similar to Just Play, particularly their effort to reach underprivileged and underserved youth.

After taking over from the Lil’ Moose Hockey Program upon the Jets’ return, the WJTNF significantly increased the size and scope of the program.

“The unique aspect of our program is that we start with them in Grade 2, and we stay with them until they graduate,” confirms Dwayne Green, Executive Director of the WJTNF. “That’s one of the things that we’ve really changed up since the return of the Jets.”

The hope is that the program will help kids benefit from increased confidence on and off the ice.

“It’s not about making them the next Andrew Ladd,” Green says, “It’s more about keeping them committed to their school and their community, and ultimately to improve graduation rates.”

Kids that participate in the program are generally from schools that are deemed to be ‘at risk’ by the province, and like Just Play, the kids receive equipment, as well as on-ice instruction once a week and a healthy snack. Green reports that for about 350 of the students, there is also an after-school program that includes some ice-time, but also academic help along with a hot meal provided by the University of Winnipeg’s Diversity Foods.

It’s a well-rounded approach to providing kids with the kind of support they need, and this in turn is a step in the right direction to developing increasingly healthy communities.

As Green puts it, “I don’t think you can really put a value on being a part of a team.”

With over 500 kids involved in the Winnipeg Jets Hockey Academy, and over 200 kids participating in Just Play over the last two years, the lives of so many young people have been touched. They’ve been introduced to a great outlet for physical activity and team play, and now have their own new equipment in order to continue on in whatever capacity they choose.

This is merely the direct programming run by WJTNF and Hockey Manitoba – they also both fund other community initiatives that provide similar support, such as the North End Hockey Program.

Every organization, as well as individual, doing their part to better the community through active group play, can really make real change.  So when the outdoor ice gets put in at community clubs around the city, go ahead and do your part to participate. I’ll see you out there.

Keep your stick on the ice.