The Reason You Walk

We often hear that the personal is political, and vice versa. That axiom doesn’t always seem obvious when examining reconciliation in Canada. The systemic problems of colonial racism can seem too vast to comprehend on a personal level.

Wab Kinew’s The Reason You Walk is a powerful memoir that explores how this centuries-long crisis affects daily Canadian life, and how our interpersonal interactions can spawn national progress.

Local news junkies will be acquainted with Kinew. The University of Winnipeg associate vice-president for Indigenous Relations has been a familiar face and voice on the CBC for the better part of a decade and is also a correspondent for Al Jazeera America.

The Reason You Walk is a memoir of his relationship with his father, Tobasonakwut Kinew, an Anishinaabe activist and educator who played a major role in indigenous civil rights movements and the Truth and Reconciliation Commission of Canada before his death in 2012.

Kinew uses his relationship with his father and their contrasting generational experiences to examine the first- and second-hand effects of residential schools. He also tells a rich and emotionally resonant story of a family and their relationship to their cultural heritage.

The book is full of vivid retellings of language, songs and spirituality. Even though Kinew’s Anishinaabe experience is specific, the relationship of an individuals to their heritage is universal, making these detailed accounts relatable to readers.

Kinew’s writing style is straightforward and unadorned. It feels almost like a fable, or a parent telling a story to their kid. It works well with the cross-generational aspect of the book and allows the political aspects to rise organically from what feel like heartfelt anecdotes. It’s occasionally detrimental, with major events like the dissolution of marriages seemingly coming out of nowhere.

But those are minor quibbles with what’s ultimately a rewarding read. Kinew tells the story of his family in such a way that the reader is always aware of the layers of history behind every contemporary event. The book never feels like just one story. Past generations and ways of life inform every moment, like background music scoring the main action.

That constant awareness of history and culture spilling beyond the page somehow makes the racism Kinew examines both more emotionally impactful and more easily contextualized. You feel the pain of the people on reserves who received body bags instead of medicine during an H1N1 outbreak, and the Wixáraca people of Mexico whose sacred peyote gardens risk destruction by mining companies. It’s hard to imagine a corporation destroying the holy site of any non-indigenous culture.

Kinew’s experiences with other cultures in addition to his own Anishinaabe background illustrate the book’s most important theme. He shows how the horrors of colonialism has, in a way, united all indigenous North Americans.

Where these types of regional cultures might be seen as dividers in other parts of the world, they’re uniters for the Kinew family. It’s that type of humanism that The Reason You Walk so effectively argues for. Embracing similarity and respecting difference between all cultures. Reconciliation, both personal and political. 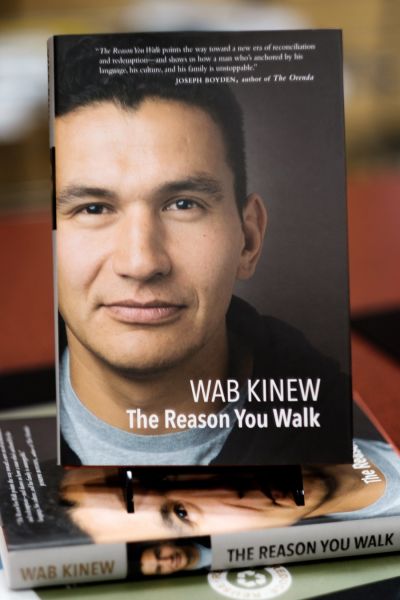