“It’s fantastic, such a wonderful happenstance,” Collins says. “It’s unprecedented in the city and I hope it continues. It’s a new era of Winnipeg talent.”

Collins, 30, is a member of the Prairie Theatre Exchange Playwrights Unit.

Her latest work, Good Intentions is the first offering of Winnipeg Jewish Theatre’s season, running until Oct. 20 at Berney Theatre (123 Doncaster). The story follows a Canadian doctor who goes to work in South Africa.

“Women start disappearing from their beds and she has to figure out why,” Collins says. “She’s completely out of her context, doesn’t know the language. She’s coming there with the idea that what she knows is right and has to start questioning that when she’s in the context of South Africa.”

Collins has been a playwright for eight years, but Good Intentions is her first professionally produced play.

From a fledging freshwoman to a playwrighting vet, Gray has been working in Winnipeg theatre for the past 25 years, working as an actor, director, playwright, designer and puppeteer. She says she’s not surprised to see her female playwright peers take centre stage.

“All of these women are fabulous,” Gray, 47 says. “They’ve all been around for years working their butts off. We all have our day jobs and we’re all working 24/7 to make our art happen.”

Theatre Projects Manitoba and zone41 theatre is presenting Gray’s newest work, The Miser of Middlegate, running until Oct. 13 at the Asper Centre for Theatre & Film. An adaptation, the play is a Winnipeg take on Molière’s satire The Miser.

“I’ve always loved cheapskate characters and Molière is notorious for being hilarious,” she says. “I couldn’t believe it was an old play, it just seemed so current”.

Cooper, another member of PTE’s Playwright’s Unit, will have her play Social Studies run at PTE from Nov. 20 to Dec. 8. She says local productions are important because they support local actors, designers and directors, and they give the audience a relatable story.

“Those are our stories. They’re actually talking about our people, our issues, our streets and our histories. It’s important to pay attention to that,” Cooper says.

Patterson, 47, agrees that the most important kind of play is one that reflects the people sitting in the audience. She says it’s problematic for women to only see stories produced by and starring men because it gives them less to relate to.

“We use stories to understand how we can be in the world,” Patterson says. “If we’re not hearing stories about women, our ability to imagine ourselves doing any number of things is diminished because we don’t have the examples in front of us.”

Patterson’s play, Sargent & Victor & Me, is being produced by Theatre Projects and opens on Feb. 27 at the Asper Centre.

The story started out as a verbatim theatre project, with Patterson interviewing residents of the Sargent Ave. and Victor St. neighbourhood and putting their word for word interpretations of the area on stage.

Patterson says she wrote the play because she was fascinated that the neighbourhood had gone from “this happy, family friendly place to live, to crackhouses and gang violence.”

The playwright, who suffers from multiple sclerosis, elected to include herself in the piece, as the degradation of the neighbourhood parallels her own body’s decline.

From weakening to strengthening, Patterson says it’s her goal to put more females on stage, so that women can “understand that our place in the world is bigger than maybe we’ve been told.”

Sobler’s on board. She believes that making women the focal point of plays is a crucial way of promoting gender equality.

“I think that’s the only way to convince men at large and to make it part of the zeitgeist, the accepted paradigm, that women are their own to tell their own stories,” she says.

“Until we accept that women can be the center of their own stories, and that men can enjoy these stories just as much as women, women will be supporting characters.”

Sobler’s play, The Secret Annex is part of the Royal Manitoba Theatre Centre’s season, opening Feb. 20 at the Tom Hendry Warehouse Theatre. The story sees Holocaust victim Anne Frank surviving the war and moves to New York City, looking to publish a book about her time in hiding. However, Frank has a hard time finding an interested publisher and big questions are raised.

Speaking of big questions, is the term “female playwright” even the right term?

“I hate the term ‘female playwright’ because it implies that we’re a subset of playwrights in general,” Ardern, 23, says. Her play Harry and Vivian Entertain Guests recently wrapped up at Sarasvàti’s FemFest, an annual festival celebrating women in theatre.

“We’re not sub-anything, but we are underrepresented.”

When it comes to the underrepresentation of women in theatre, Sobler says she feels the 2013-2014 Winnipeg theatre season is a step in the right direction.

“It’ll be great when at some point we don’t need to celebrate women being produced,” she says. “In the meantime, it’s great we’re celebrating and calling attention to it.”

In the end though, Sobler agrees with Ardern’s sentiment.

“Stories are universal and it doesn’t matter who’s writing them.”

The play: The Miser of Middlegate

When/where: Until Oct. 13 at the Asper Centre for Theatre and Film

What they say:
“Set in modern day Winnipeg, Gray’s inspired version of Molière’s classic satire is part sex farce and part screwball comedy. Exploring family, love and money, The Miser of Middlegatesharply critiques our culture obsessed with acquisition and never loses its sense of humour.” - theatreprojectsmanitoba.ca

The play: The Secret Annex

When/where: Feb. 20 to Mar. 8 at the Tom Hendry Warehouse

“Anne Frank has survived the war, and at age 25, she’s ready to start a new chapter in New York City. Eager to publish a memoir of her time in hiding, Anne is sure it will launch her career as a writer. But when the only interested publisher demands drastic rewrites, Anne questions the meaning of her new life. Why did she survive, if not to share stories? In her compelling and provocative play, Manitoba playwright Alix Sobler asks: can the past be rewritten?” - mtc.mb.ca

“When Jackie moves back to her childhood home after separating from her husband, she thought her biggest problem would be readjusting to life on a smaller bed. She didn’t realize her mother had actually given that bed away to a Sudanese refugee. Now she has to decide how to get on with her life under these new circumstances and figure out who she is within this new family dynamic, especially with Deng now firmly ensconced as the favourite “son”. But the former “Lost Boy” is not all that he seems, and the entire family – Jackie, her “earth goddess” mother and her sixteen year old sister – learns something about making assumptions. Cultural differences, language barriers, and the self-conscious earnestness of the “well-meaning” combine to deliver a scathingly comic look at Canadian values.” - pte.mb.ca

The play: Sargent & Victor & Me

When/where: Feb. 27 to Mar. 9 at the Asper Centre for Theatre and Film

“Once upon a time, the corner of Sargent Avenue and Victor Street is legendary as the heart of Winnipeg’s Icelandic community. Lately, it has become known as a place of violent crime and ruthless street-gang activity.

Told through a series of first person accounts from past and present residents of this iconic Winnipeg inter-section, Patterson’s brave new play maps the core of a storied neighborhood, and traces the contours the heart of the playwright who is our guide.”

“When women start disappearing from a South African hospital, Canadian doctor Hannah Jacobs is faced with a decision that could alter the fate of an entire village. A woman who lives by the concept of Tikkun Olam or ‘healing the world’, Hannah must choose between her beliefs and her environment in her quest to do what is right.” - wjt.ca

“This comedy follows Zack’s struggle to choose between the love of his parents and the love of his life after his folks discover he has secretly married a shiksa. Zack’s father declares his son dead, while Zack’s mother goes on a crusade of her own. As Zack moves further away from his family, Emma - the ‘shiksa’ - finds solace in the most unlikely place.” 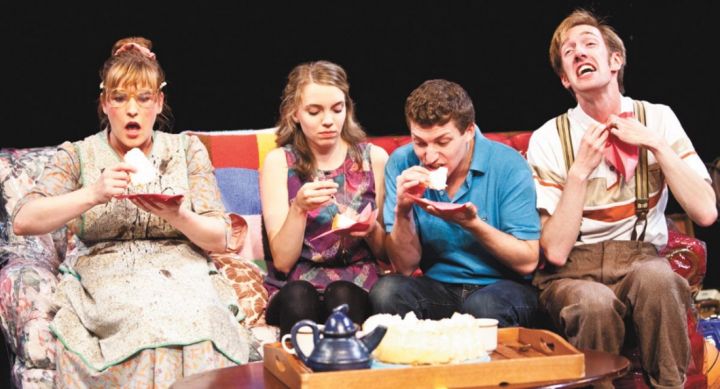 When/where: Part of Sarasvàti’s annual FemFest, which ran Sept. 14 to 21

“Harold and Vivian aren’t used to guests, in fact they don’t even like each other’s company and married purely for spite. Hilarity ensues when newlywed yuppies move in next door and come by for a visit.” - sarasvati.ca