Perhaps the most well known Chinese writer-director in North America, Wong Kar-Wai has made four decades worth of sensational and spell bounding films. 1994’s Chungking Express, 2000’s In the Mood For Love and 2004’s epic 2046 are just a few fantastic films in his repertoire.

The man is certainly capable of making a masterpiece at any moment, which is why fans are on the edge of their seats when a new Wong Kar-Wai picture arrives in theatres. His latest film, The Grandmaster is certainly making waves with audiences worldwide.

This biopic stars Tony Leung Chiu Wai (Red Cliff) as IP Man, the martial arts master who trained the likes of Bruce Lee. Chronicling his life, the film begins with his peaceful time in the city of Foshan, which is interrupted as he is threatened by Gong Yutian (Wang Qingxiang), a retired martial arts master of the North.

Though it’s “based on a true story”, the majority of the film seems more fantasy than reality. While discussing the film with a friend from China, they claimed that it “felt like an attempt by the Chinese government to glorify and white wash IP man’s history”. While Wong Kar Wai’s film can be obnoxiously melodramatic, it is spectacularly well made and absolutely enthralling. It is full of love and hate, of despair and of hope.

Apparently there are many versions of The Grandmaster circling theatres around the world. While North America can see a 108 minute cut, Asia is in possession of a 130 minute cut. Does the director think so little of the American attention span? While the North American version is absolutely breathtaking, it feels as though a chunk of the story is missing.

Regardless, the themes seep through the screen and into our consciousness. IP’s inner struggle for peace is universal and the fight scenes are majestically choreographed by Yuen Po Ping. 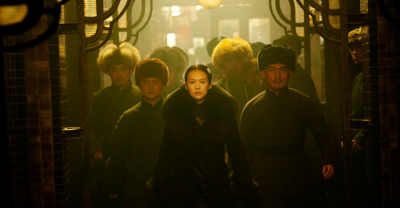