I’ve never heard “lost at sea movies” or “lifeboat movies” discussed as a genre, but I think there’s a convincing case to be made for it. As far back as Alfred Hitchcock’s Lifeboat and as recently as Ang Lee’s Life of Pi, stories of survival in the isolated setting of a boat are a rarely discussed tradition. Canadian feature The Disappeared is a solidly dutiful entry in this tradition that never feels like old hat.

The setup is simple: a ship has sunk, and its six-man crew is stranded in two lifeboats. If you’ve ever seen a movie like this, then you’re already familiar with every story beat that The Disappeared hits. But writer/director Shandi Mitchell (Baba’s House) understands that movies like this aren’t about plot. They’re about character, isolation, and survival. The setting of a lifeboat is a unique one: a lifeboat stranded in the middle of the ocean is able to be claustrophobic while still conveying the vastness of the unforgiving sea. The setting allows for rich themes to be explored to their full potential without ever being verbalized or hammered home.

The characters always feel three-dimensional. In a movie all about character interplay, it’s easy for a filmmaker to give in to the urge to make their characters cyphers for a theme or worldview. Mitchell resists that temptation. All of her characters are real people, flawed and unlikable, yet sympathetic. They’re not necessarily the people you’d want to be stranded with, which is the point. All of the performances are perfectly calibrated. I particularly enjoyed Brian Downey, who I recognized as the villain from Hobo with a Shotgun. There he was manic; here he’s subtle.

The drama does sometimes feel forced, mainly because it is. How could it not be? But The Disappeared isn’t about drama. If you can look past that, you’ll be well served. 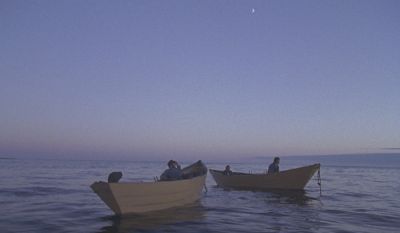