The cost of going green

It’s not always easy being green, but several Winnipeg organizations are working to make environmental initiatives more accessible across the board.

“The unofficial face of trendy environmentalism is a smiling white woman meandering through a sunny farmers’ market, leafy greens popping up through her reusable shopping bags,” Madeleine Somerville writes for The Guardian.

That’s an uncomplicated vision of a multifaceted issue, she goes on to suggest. The picturesque ideal of lifestyle environmentalism ignores factors like class, education and ability that prevent many from living the apparent green dream.

Electric cars, solar panels and organic granola bars are no longer fringe markets for only the most enthusiastic eco-advocates, and, according to a Nielsen global survey, a growing number of consumers are factoring in environmental impact when they’re making purchases.

But given their increased costs, green-marketed products and initiatives tend to be marketed to, and purchased by, people who have the time, physical ability, education and financial capacity to invest in them.

A new Nissan Leaf may reduce gas bills in the long run, but the $37,000 price tag means it’s only an option for the rich.

And a new energy-efficient dishwasher may reduce expenses eventually, but the upfront cost can be prohibitive, and landlords whose tenants pay for utilities have little incentive to make the upgrade.

It’s not so clear cut that buying the latest eco-gadget is the best solution to climate change anyway.

“You can buy these things with fancy packaging. They’re organic or whatever, but it turns out they come from halfway around the world.” 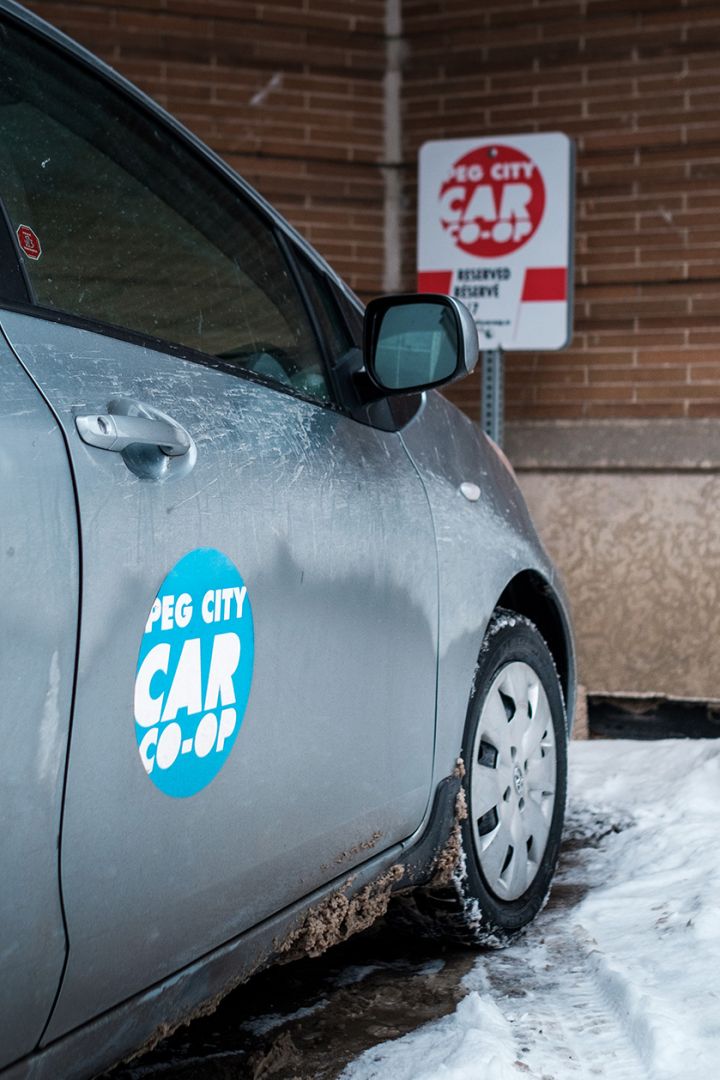 Several Winnipeg social enterprises are working to move toward a more accessible, community-oriented form of environmentalism.

Philip Mikulec of the Peg City Car Co-op says the car-sharing initiative makes not owning a car a more viable option for Winnipeggers who walk, cycle or take public transit most of the time.

The co-op has about 20 vehicles stationed throughout the city, which members can book in 15-minute increments.

“This being Winnipeg, most people drive. And if we can chip away at that picture of the car from an individual status item that you own to a collective good that you share when you need, it’s another way we can look at car usage in Winnipeg,” Mikulec says.

According to Environment Canada, transportation is the biggest climate culprit in Manitoba, accounting for 39 per cent of the province’s greenhouse gas emissions.

One study showed that in similar scenarios across the U.S., each car share vehicle took up to 11 personal vehicles off the road.

Though Mikulec admits that most of their users are young professionals, and the co-op hasn’t expanded into low-income areas of the city, he says it has the potential to provide vehicle access to people who might not be able to afford one.

Members pay a $500 deposit up front or a monthly fee, plus usage fees for time and mileage, which can be a significant savings compared to the $7000-8000 per year it costs on average to own a car in Canada, according to CAA.

Mikulec says Winnipeg Transit is a good way to get around, but it’s limited by its budget and the city’s low-density design.

“We want to be part of changing the urban pattern that has been occurring in Winnipeg. And we’re just one small piece of the multi-modal transportation pie,” he says. 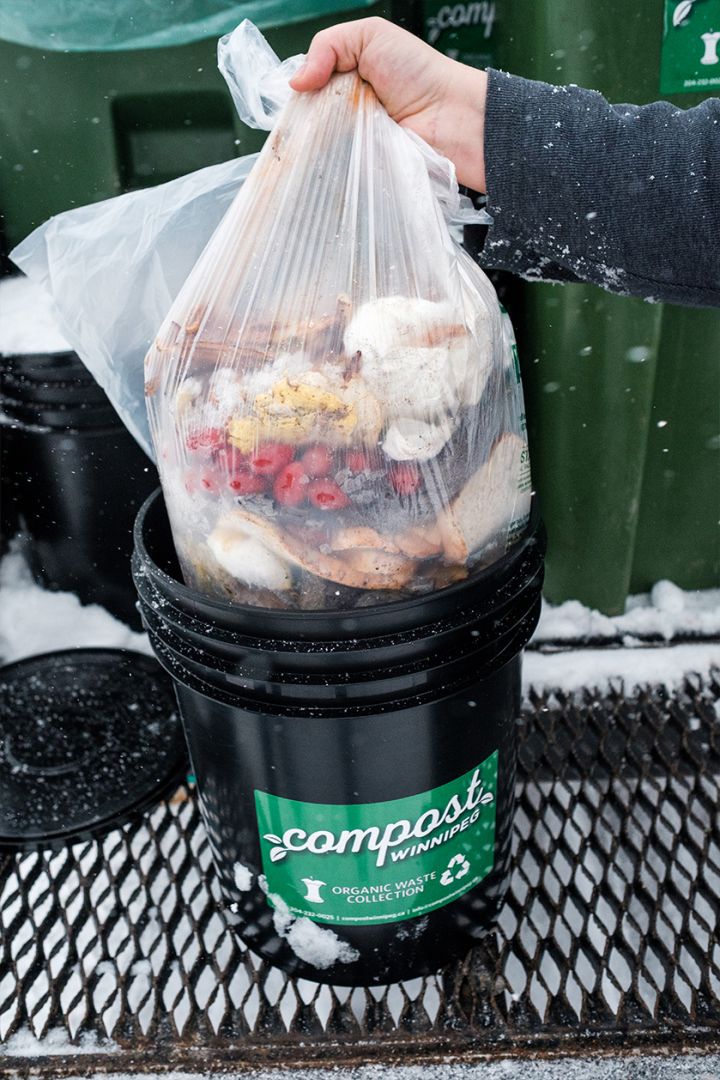 An example of the average contents of a compost bucket. These buckets are collected weekly and the contents are taken to a recycling facility near Route 90 in Winnipeg.

Transportation isn’t the only area where the social sector is providing additional eco-options.

“There’s all kinds of reasons that people don’t have an ability or willingness to compost on their own,” Kelly Kuryk of Compost Winnipeg says. Many people live in apartments, have physical disabilities or simply don’t have the time or knowhow to process their own organic waste, she says.

When organic waste breaks down in a landfill, it lacks oxygen and attracts bacteria that release methane and other greenhouse gases. But when they break down in an ideal environment, they release far fewer harmful gases, and the resulting compost can be used on crops instead of harmful chemical fertilizers.

Compost Winnipeg, a branch of the Green Action Centre, has been working with schools, businesses and community groups since last April and started offering household pickup last month.

Kuryk admits it’s not a perfect solution, recognizing that the $25 monthly price tag makes the service out of reach for some Winnipeggers.

“We’re keeping all our costs absolutely as lean as possible, because we do want it to be something that’s as accessible as can be,” she says.

While many cities across Canada have comprehensive organic waste programs that include citywide curbside pickup and municipal processing plants, Winnipeg’s capacity is limited to seasonal yard waste.

“We are completely looking at this as a temporary solution that will fill in a gap until the city moves forward,” Kuryk says.

Plans for an expanded municipal program were met with opposition from several city councillors last April due to cost, and Coun. Brian Mayes, chairman of the city’s water and waste committee, said it would likely take another four years for an organics program to get up and running.

A new report presented to the city’s water and waste committee on Jan. 29 suggests the city set aside an additional $200,000 for further consultation.

The report also calls for an inquiry into how a carbon tax could help fund greener waste management in the city. 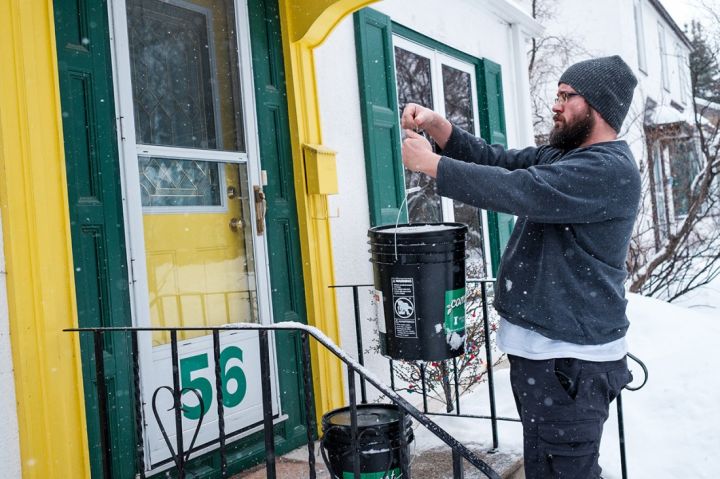 Jaret Olford, a compost courier with Compost Winnipeg, weighs a bucket he's picking up. After making weekly pickups of full buckets, Olford leaves a fresh one for the household.

Lynne Fernandez of the Canadian Centre for Policy Alternatives sees this as an opportunity to create good jobs for people who would otherwise struggle to find work.

If coordinated by the city or a non-profit, she says “organic waste pickup is the perfect kind of entry level job for somebody who has no training. There should be some sort of cross-fertilization there so that … it’s dealing with both greenhouse gas issues and environmental issues at the same time as it’s dealing with poverty and job training.” 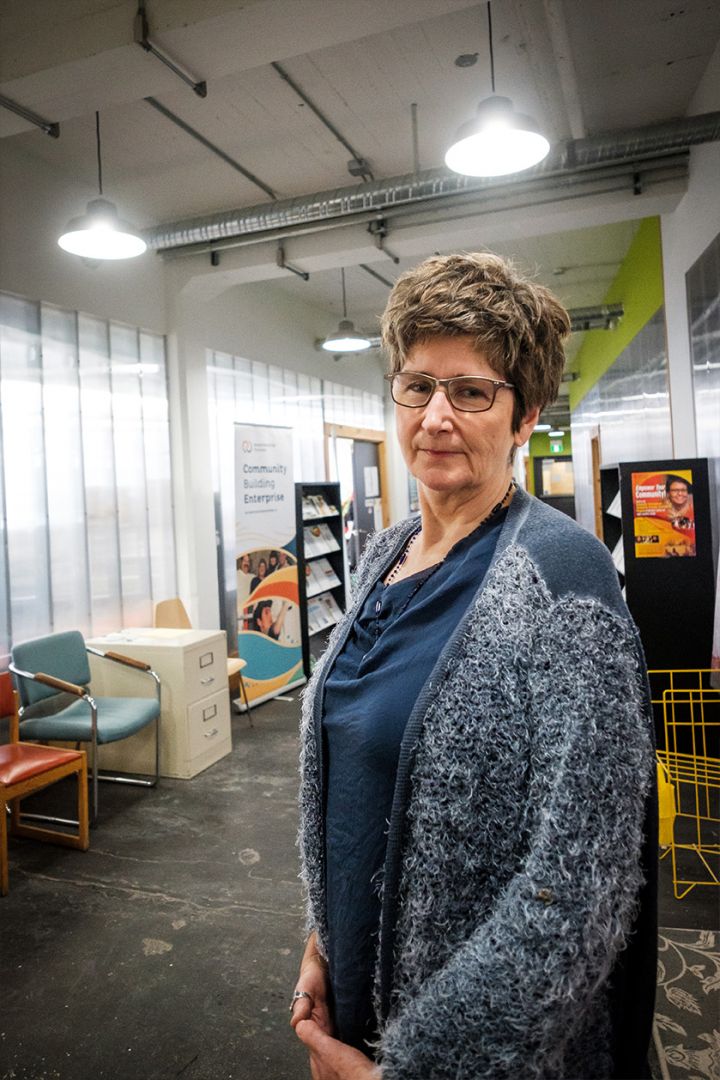 It’s this type of integrative approach that was the impetus behind BUILD – Building Urban Industries for Local Development. The social enterprise trains and employs multi-barriered workers who would otherwise be unable to find a job.

“So we’re increasing the income and creating more sustainable employment for individuals, jobs that could have a future, but at the same time reducing energy costs, reducing the likeliness of energy poverty,” Art Ladd, executive director of BUILD, says.

“So many people are energy poor,” Fernandez says. “They’re spending so much money on heating, they’re living in these old leaky buildings, that they might as well just be throwing money out the window.”

She also notes that when it comes to climate change, it’s usually low-income communities that feel the impacts first.

According to Ladd, environmental factors have been a priority for BUILD since the beginning.

“We’ve always looked at ways that we could use the green economy to address social issues,” he says.

Their partnership with the provincial government, and Manitoba Hydro in particular, has been central to BUILD’s success.

Hydro offers free insulation and energy saving products to qualifying low-income individuals and financing and rebates on major investments like geothermal systems. But many Manitobans aren’t aware of the programs or struggle to access them without help from social enterprises like BUILD. 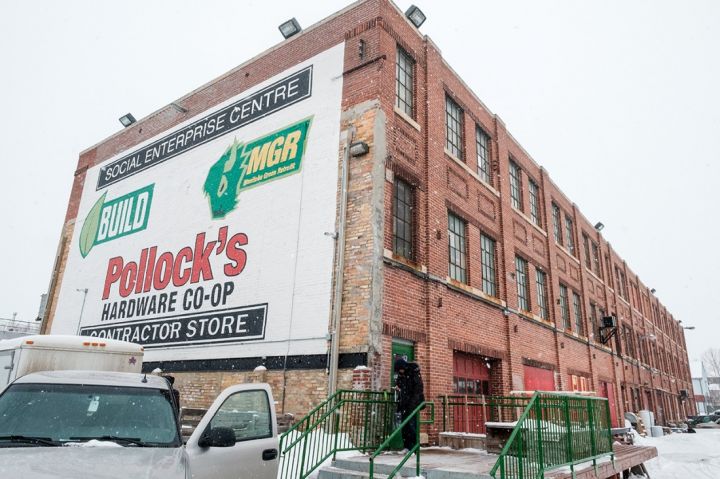 The Social Enterprise Centre in Winnipeg's North End neighbourhood is home to many businesses and organizations trying to affect local social change , including the Canadian Centre for Policy Alternatives (CCPA).

The provincial PCs have promised to move Hydro’s energy efficiency programs out of the crown corporation and into an independent agency, but some Manitobans are concerned this will be cost-ineffective or lead to further privatization.

“I worry about this being a slippery slope because I worry about Hydro being a target for privatization and starting to carve off little portions of it is actually how it begins,” Fernandez says.

“Even if they don’t carve it out, even if it stays under Manitoba Hydro, they do have to find ways to make that more accessible, and more people have to be willing to buy into it,” she says.

In a recent Probe research poll, commissioned by the Canadian Union of Public Employees, 78 per cent of Manitobans said they would prefer to see Power Smart remain within Hydro.

The crown corporation has been criticized for its exploitation of Indigenous communities in northern Manitoba, and Fernandez says its funding and financing programs need to be made more widely available. But the partnership between the province and social enterprises like BUILD is a model that she and Ladd say could be expanded into other fields, including public transit and waste management. 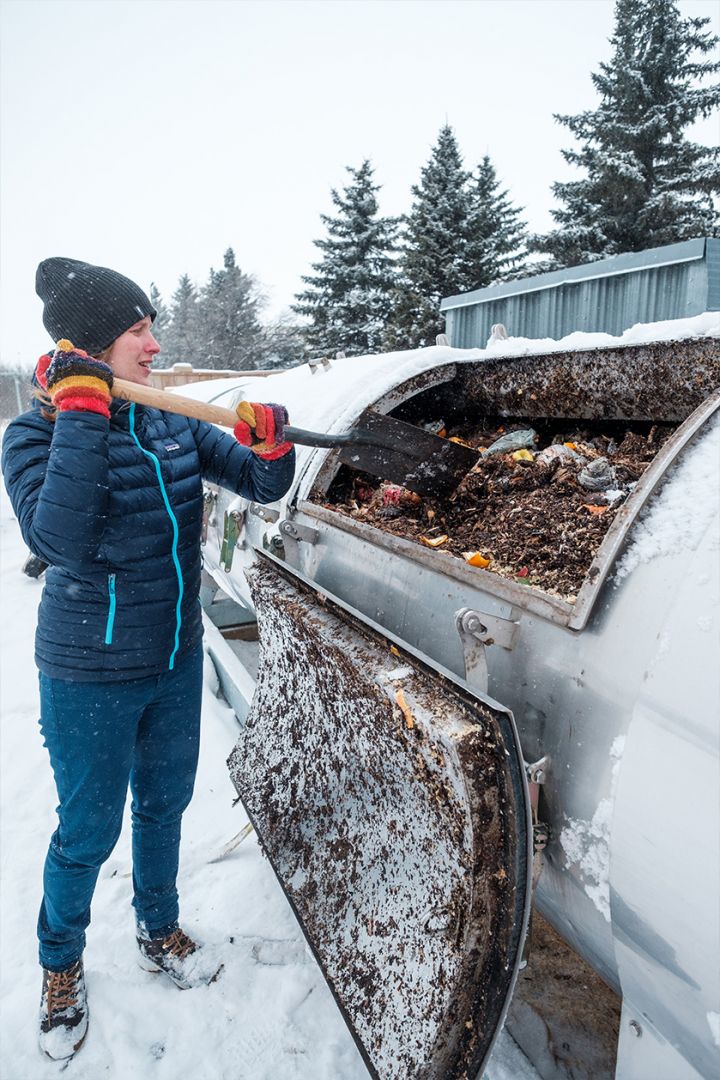 Kelly Kuryk, project manager of Compost Winnipeg, digs in a composter that's part of a partnership with the Seven Oaks School Division.

These types of initiatives require individuals and non-profit organizers, as well as government funding and collaboration.

“Reducing the cost of environmental innovations, new products, new technologies so that there’s broader uptake is certainly really important, and relying on a market system may not be the best way to disperse such innovations,” Alan Diduck, acting associate dean of science at the University of Winnipeg says.

“There’s an important role to play through environmental law and policy to create incentives.”

Mikulec says Peg City Car Co-op has collaborated with the city on parking variances related to new developments, but its relationship with Transit is arm’s-length.

“It’s sort of exciting in Winnipeg, because there is so much growing to do in the world of waste management and increasing composting, but at the same time, it's just also very frustrating because we are so far behind almost every other major municipality or city in Canada, so … we’re desperately encouraging the city and the province to continue moving forward so that we’re not so far behind the rest of Canada,” she says. 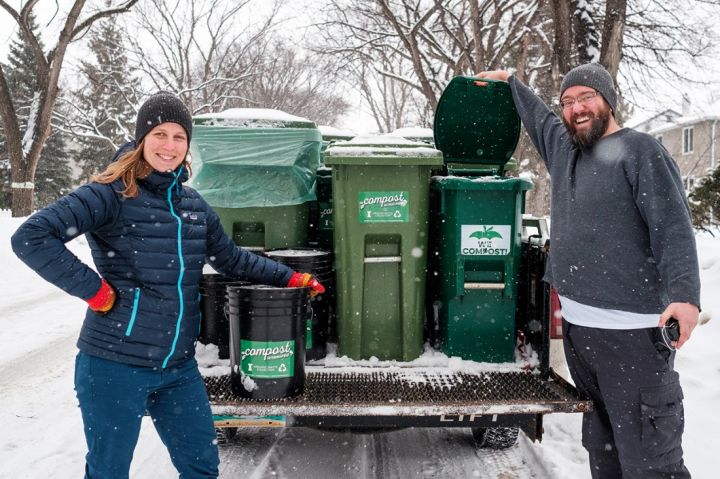 Kelly Kuryk and Jaret Olford on a compost pick-up route.