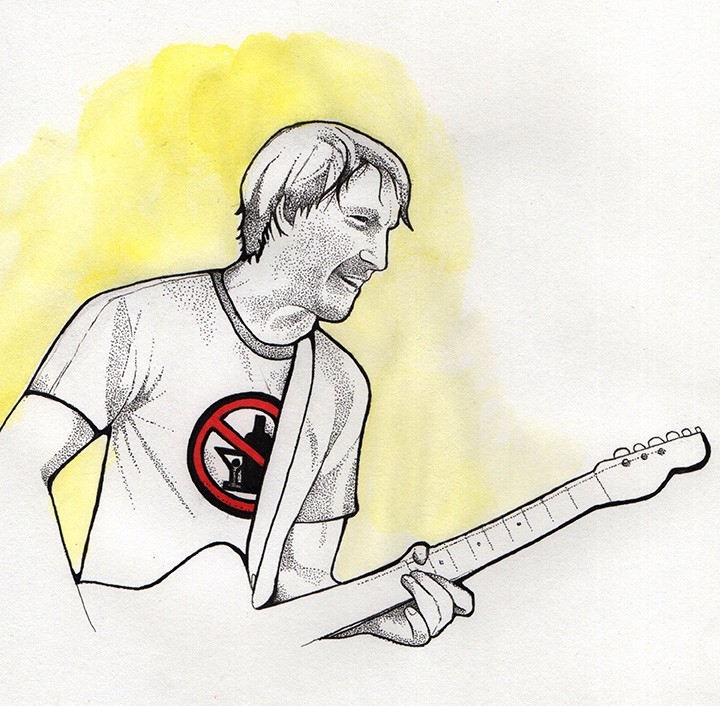 In the world of rock ’n’ roll, booze is often seen as central and necessary. Knowing that some musical heroes are sober while creating and performing their work can be hugely inspirational for fans and other musicians.

Jay Nowicki of local blues/rock ’n’ roll outfit The Perpetrators has been sober for three years now. When he first started playing with The Perps, Nowicki was a long-time guitar player but new to singing, so he’d limit himself to one or two beers before a show. But soon the booze started flowing more freely.

“We were pretty much a party band,” Nowicki says. “We started getting notorious for that. We ended up getting a bit of patronage from Jim Beam … lots of free bottles of whiskey, cases of whiskey on the road.”

That reputation came with a built-in expectation from fans.

After getting sober, some people have a tough time in bars and music venues, where booze is king. Nowicki found it much easier to be there once his decision was made.

“And as soon as I admitted that I was weaker than the need for alcohol, then I was cool with everything, cool with the bar, cool with doing gigs in bars,” he says. “It was when I was trying to prove that I was stronger than that, and I could just take it easy or take a break and then drink again, that’s when it was hard to be in a bar.”

He credits John Scoles, president/janitor of the Times Change(d) for stocking a wide selection of non-alcoholic beers in his venue, including a rare Chinese brand that, despite the novelty, was “just awful.”

In terms of his sober heroes, Nowicki is quick to name Ryan Menard, bass player for The Perps and his best buddy since Grade 1, who had six or seven years of sobriety at the time Nowicki joined him. He also looks up to Billy Joe Green, who has about 30 years under his belt, Nowicki guesses.

“When he found out about (my sobriety), he said, ‘welcome to the good life.’”

He doesn’t go out of his way to declare his sobriety, but it’s also no secret.

“It could only be a good thing for (younger fans at a show) to know that there’s no booze involved in that, or drugs or anything. It’s just total sober music.
I mean, the reason why I started playing in the first place is what that made me feel, not that in combination with four shots and 12 beers and [a] big fat line of blow, right? It was the music – that makes you high.”

Three years into sobriety, Nowicki is still just as committed to music and having a good time.

“I feel way cooler than ever. I feel more powerful standing up there and doing that thing. And I’m just as goofy as ever. (Andrew) Neville calls me the drunkest sober guy in town, and that’s because I’m a total goof,” Nowicki says.

“It’s badass to get up onstage and rock as hard or harder than someone who’s fuelled up with a bunch of liquid courage, right? Get up there and giv’r.”

Anastasia Chipelski is the Managing Editor of The Uniter. She’s mostly retired from rock ’n’ roll but will play for an audience of cats.

Jay Nowicki is father to a new human and frontman for The Perpetrators, who play The Park Theatre on Nov. 5.