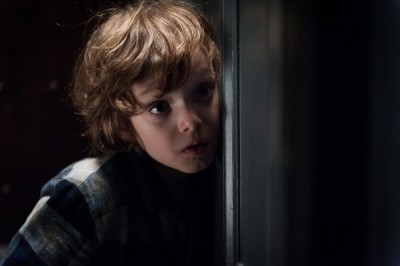 The Babadook is the type of horror movie that puts other horror movies to shame. Cinematic ghost stories are an abundant and often poorly crafted commodity in Hollywood. Whether it's demons, phantoms or poltergeists, there's always a ghost-hunter, exorcist or clairvoyant nearby to predictably save the day. The Babadook goes in a refreshingly different direction, delivering an utterly relentless and original horror experience. The bar has been raised intimidatingly high by writer-director Jennifer Kent.

The plot follows Amelia (Essie Davis, Girl with a Pearl Earring) a single mother raising a rather troubled young son named Samuel. He makes primitive weapons, and studies magic and sleight of hand. He also finds himself suspended from school for bringing one of those weapons to class. The characters are so finely crafted that the film would be just as fascinating without the horror elements.

One night, Samuel finds a pop-up book on his shelf, which Amelia reads to him as a bedtime story. The ghoulish-looking book is titled The Babadook. As we expect, Amelia's reading of this book unleashes something awful on this household.

Infested with subtextual vermin, Kent's screenplay begins tightening the screws from the first frame and never stops until the credits roll. Instead of overusing cinematic violence and gore, Kent utilizes mood and atmosphere, proudly flaunting silent film visual influences and imbuing each scene with a sense of impending doom. This is no mindless slasher movie, or some corny <i>"it was only a cat"</i> jump-scare fest. This is a methodically made piece of horror cinema of the highest level.

A successful horror film must not only be scary, but also qualify as an engaging and entertaining movie, regardless of genre spookiness. A good movie, not just a scary one. The film succeeds not only because it's genuinely creepy and effective, but because it's a skillfully acted and well-written story. The Babadook is unquestionably the best horror film of 2014.