Ayqa Khan’s work has always been about the body.

The South-Asian, Brooklyn-based artist’s work is visiting the University of Winnipeg campus this September.

Noor Bhangu, an independent curator based in Toronto, is behind Not the Camera, But the Filing Cabinet: Performative Body Archives in Contemporary Art, a new exhibition of female and non-binary identifying artists at Gallery 1C03, which will include Khan’s work. For Bhangu, the specificity of Khan’s art has a deeply personal connection. 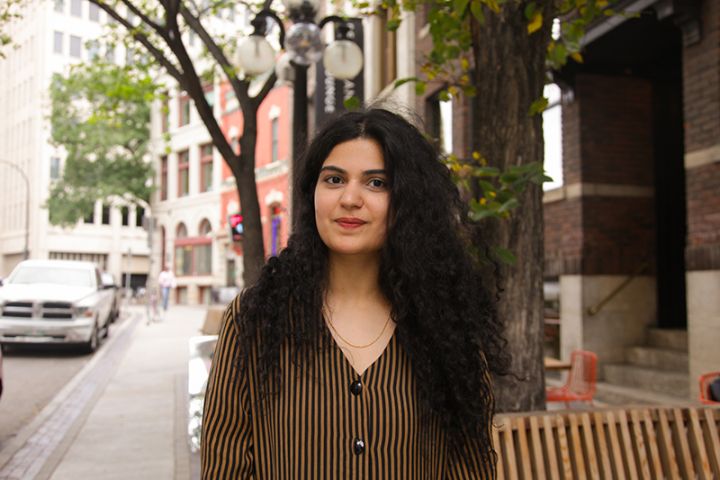 Noor Bhangu, the independent curator behind Not the Camera, But the Filing Cabinet: Performative Body Archives in Contemporary Art // Photo by Callie Lugosi

“I discovered her work maybe last year,” she says. “It was really blowing up around that time with (her) body-hair illustrations. I was really excited about that, because I’ve been living with body hair for a really long time and shame of having body hair as well.”

Although Khan’s body and bodies like hers are central to her photographs and illustrations, her art has gained popularity not through physical galleries but through the ephemerality of the internet, specifically Instagram.

When she first began experimenting with posting images on Instagram, Khan says the act of posting and the experience of having a body began to blur.

“I didn’t take it seriously as a body. It was like, okay, this is a body, but it’s disposable, but it’s also not disposable, which is interesting, because I feel like it’s also how I handle my own body.”

Khan’s use of “body” conjures up both digital and material worlds: the “body of work” that she has archived online and also
literal bodies.

This complicated relationship between real and online bodies in Khan’s work extends beyond her own practice and person.

On Sept. 15, MAWA (Mentoring Artists for Women’s Art) and Gallery 1C03 will co-host a workshop with Khan called Roundtable for Young Feminists of Colour in conjunction with the exhibit. Given that most people know her work from the internet, Khan is experimenting with what happens when bodies that have previously existed only as usernames gather in a room.

“It’s going to be really interesting to see how the digital exists offline,” she says.

As participants perform simple guided tasks, they will engage in a discussion about what it means to be young feminists of Colour. For Khan, who is about to enter her second year of art school, the community-focused nature of the workshop is a response to her experience trying to navigate official arts institutions.

“When we don’t fit into these systems to begin with, it’s exhausting, and it’s debilitating,” Khan says.

For marginalized communities, be they online, in person or in the murky territory in between, Khan believes gathering to exchange ideas is a way to create change.

“I would want more people to believe in themselves,” she says. “The only way we can do that is to hear more from other people who are like us.”

Bhangu hopes the workshop will help foster community in the city.

“I don’t think there’s a huge (young) feminists of Colour community in Winnipeg,” she says. “It would be great to have more.”

Not the Camera, But the Filing Cabinet: Performative Body Archives in Contemporary Art runs from Sept. 13 to Nov. 4 at Gallery 1C03. The Young Feminists of Colour Roundtable is open to BIPOC and QTBIPOC of all genders, ages 18 to 28. More information can be found at mawa.ca.