The reasons why people collect things are as unique as the collectors themselves.

One theory suggests that collecting is fuelled by existential anxieties, and that our collections are an extension of our identity that lives on after we’re gone.

In 1920, real estate developer, rare art and book collector Henry Huntington exemplified this with the Huntington Library in Los Angeles.

Not only was Huntington able to stock a city library with his own collection, he had himself buried there so that he and his books could be together forever.

“It’s a part of our childhoods that we don’t want to give up,” Dany Reede says. “It’s got the old family movie night vibe. It’s comforting.”

As time passes, what people choose to collect changes to reflect their interests or the time they live in.

“I’ve had collections where I’ve decided that I don’t really care about these things anymore, so I let it go. Cameras used to be a thing we both collected,” Amber Reede says. “Currently, we’re into buying blankets with cartoons on them. I think we have 10 so far. We’ve got a Hulk Hogan sleeping bag!”

Vinyl provides a tangible relationship with the music people listen to, which would explain why collecting the medium has seen a resurgence.

For record collector Scott Fitzpatrick, collecting vinyl led him to curate a 250+ selection of disco singles.

“I don’t really have much reason to collect them other than that singles are a super fun way to listen to music,” Fitzpatrick says. “I had to buy a second turntable and a mixer, because you can’t really play singles with only one record player.”

For the Gnome Thief (who requested their name be withheld for their safety), their adventures in collecting were born out of small town teenage boredom.

“I grew up in a place where there wasn’t a whole lot to do, but there were a lot of lawn gnomes in people’s yards,” they say. “My friends and I thought they were pretty weird and creepy, so we decided to start going around stealing them. What else is there to do in a small town?”

“A friend of my mom’s was at our house and noticed there were a ton of gnomes in our basement,” the Gnome Thief says. “A few weeks later, the same person heard a Crime Stoppers alert on the radio stating that someone was going around stealing gnomes in our town, and put two and two together.”

Some people might steal, collect things they find in the street, visit thrift stores or nostalgia shops to find their treasures.

Being in the business of selling collectibles means keeping track of what people are feeling sentimental for. As generations age, the popularity of the things that people feel nostalgic toward changes.

“The things that mean something to me will not mean the same thing to someone generations younger than me, because they didn't grow up with it,” Mike Huen, owner of Mike’s General Store, says.

Huen feels that we are not the owners of our collections, only temporary custodians, with the duty to protect them until we pass them on to their next owner.

“All this stuff is gonna outlive you and I, and at some point it’s gonna go to someone else. You’re cherishing it, caretaking it, giving it a home and preserving it for the next generation. In doing that, you’re preserving your personal history.”

Dany and Amber Reede in front of their VHS library, playing with Boglins, a 1990s hand puppet. “Having that tangibility is important to me,” Amber Reede says. "Being able to physically walk over to our movie library and be like, ‘what do you wanna watch today?’, pick a tape and put it in the VCR, instead of endlessly scrolling through Netflix.”

The colour palettes used in cartoons of the ’80s and ’90s continue to inspire Dany Reede. “Sometimes if I need ideas for colour palettes, I’ll take a couple toys off the shelf or watch some cartoons and try to recreate the colours from there,” Dany Reede says. “The first art I ever made was just copying toys or cartoon characters and making them my own. I think collecting has become a part of my art practice.”

Scott Fitzpatrick's living room turntable set-up includes a collection of about 800 records, of which one-third is disco singles. “I’m not really satisfied with local record stores, so I clean up when I travel. I went to Berlin and Paris recently and just spent full days looking for records,” Fitzpatrick says.

“I have goofy taste. I like music with a sense of humour,” Fitzpatrick says. A favourite of his is “Welcome Aboard” by Mother F. “It’s a really spacey, cosmic disco song.”

“My friends and I were looking at this one for months before we decided to make our move," the Gnome Thief says. "Late one night, we went to the house, and my friends wanted me to be the one to steal it. I went into the yard to go grab it, not realizing that the gnome was made of concrete, and I fell over trying to pick it up. I was like, ‘help, I need backup!’ It took three of us to get this gnome out of this person's yard in the middle of the night.”

A tiny gnome dubbed Rulf serves as a comfort object for the Gnome Thief. “My friend stole it for me from Michael's and gave it to me,” they say. “When I feel anxious or start to freak out, I just hold him a bit. He keeps me grounded.”

“My brother once took me gnome stealing on my birthday, because that's what I wanted to do. We went to this house with a huge lawn completely covered in gnomes. We cleaned up,” the Gnome Thief says. "Shortly after, my mom’s friend told my mom that I was the gnome thief that was on Crime Stoppers. My mom went behind my back and told my brother to return the gnomes to where they came from. I think he just went to their house and dumped all the gnomes on their lawn and walked away.” 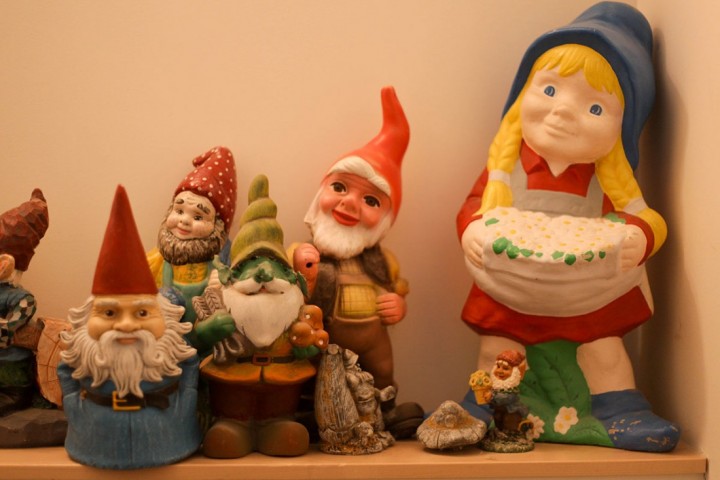 “I found out that my grandmother who passed away before I was born also collected gnomes. We went to visit the cottage where my grandpa lived, and I guess I never paid much attention to the backyard, because it was totally full of gnomes.”

“The only way I could see me getting rid of the gnomes is if I had no way to take them with me. Once I feel like my collection is complete, if that ever happens … I'm going to put them on my lawn for other people to steal, so the cycle continues,” the Gnome Thief says.

“Twenty years ago, a lady came in and dumped a bunch of Hot Wheels on my counter. No one was collecting them yet, so I wasn’t planning on buying them for the shop. In the collection she brought in, I found the 1968 Barracuda car that I had as a kid … and in that moment I understood what my customers were getting out of my shop," Mike Huen, owner of Mike's General Store, says.

In Huen's office, among his collection of slot cars and vintage signage is his chorus line of Chicken Delight banks. “I can't part with them.
It looks like the Rockettes.”