Stay close to home this summer

As soon as spring hits, mall windows fill with festival fashion inspiration and websites start pumping out lists of who wore what to Coachella.

Maybe you’ve heard of – if not attended – some of the big name festivals with star-studded lineups. When we hear “festival,” maybe you think of Lollapalooza, Bonnaroo, Warped Tour or Osheaga.

Travelling to big festivals can be an adventure – the kind that involves shelling out a lot of cash to cram yourself into a crowd of mostly total strangers, afraid to step out of the throngs to collect a $10 bottle of water or to visit a fetid porta-potty because you’ll never get back to your coveted spot again.

You get to see a few Big Name Bands for short sets while the crowd around you is basically holding you up. There’s a particular thrill of it all, if you’re into that kind of thing.

But Big Names and famous festivals aren’t the only way to have an amazing summer packed with awesome festival experiences.

In Manitoba, you could find a different festival every weekend. For the cost of tickets, travel, and food for one big festival, maybe you could check out five smaller festivals here (without the exchange rate).

You won’t catch as many Big Names at a Manitoba festival, but there’s a good chance you’ll see some hidden talents. Many acts who have graced these smaller stages go on to play bigger festivals. You could be one of the lucky ones lying under an oak tree at a festival stage, drifting in and out of an afternoon nap as Leslie Feist gets her career started (that may have actually happened).

At a Big Name fest, you can pick up a cool t-shirt, but at the smaller festivals you can collect something much more valuable: the right to be that insufferable braggart who says “Oh yeah, I saw that band when they were just starting out.”

This summer, you could discover your friends’ and friends’ friends’ hidden talents when they take the stage. Eschew the Big Name Bands altogether in favour of rooting for the little guys, basking in their unbridled energy and enthusiasm. Collect all their basement-recorded tapes and cheer them on: Tell them they could totally be a Big Name someday. 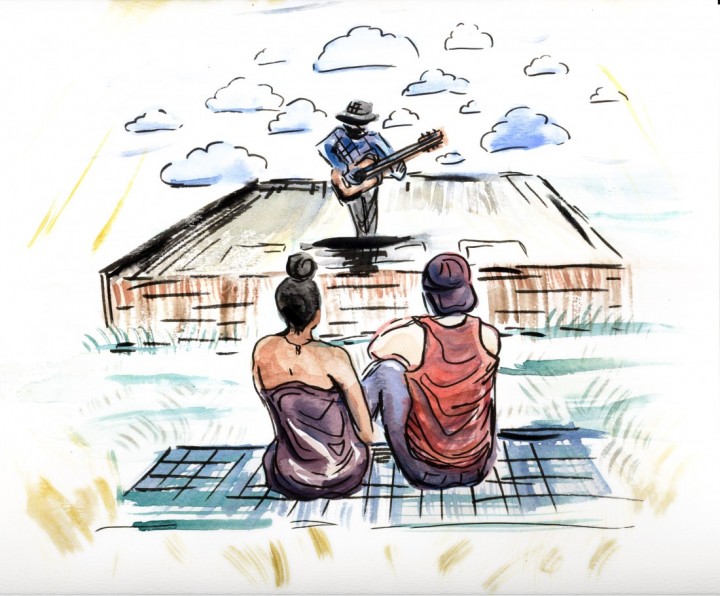 Or just kick back and enjoy yourself. Spread your blanket out – there’s plenty of space in a comfortable crowd of hundreds, or the wee thousands. Those around you at smaller festivals are often there because they share some common interest, and most summer festivals make a point of welcoming everyone into their festival culture and sharing the love.

The festival vibe is more than the right collection of accessories and an outfit that screams “I’m a free spirit!” It’s a sense of curiosity and openness, and that same sense of adventure in a more local context. Try a festival in a town you’ve never visited, or check out a kind of music you wouldn’t normally listen to. Ask to join that frisbee game out in the field (and try to reign in your wild arm so you don’t lose your new friend’s’ disc).

A lot of these smaller festivals don’t turn a huge profit. These are passion projects, and volunteers are abundant, but their mission is to curate a memorable experience for those who are keen to join them. So ditch that plane ticket and love your locals this summer!

Anastasia Chipelski is the Managing Editor at The Uniter. She plans on collecting as many local festival experiences (and naps) as possible this summer.