Son of Saul is that rare kind of film that understands the medium so well it reinvents it by simply existing.

Its format is rigid and experimental, but it’s never merely a formal exercise. Its moral and philosophical ambitions are equally as heavy, and rewardingly ambiguous.

The film follows Saul Ausländer (Géza Röhrig), a Hungarian-Jewish prisoner in Auschwitz. Saul is a member of the Sonderkommando, a group of prisoners forced to work disposing of bodies in the camp’s gas chambers.

One day, Saul discovers the body of a child he believes to be his son. He becomes determined to give the boy a proper Jewish burial, and risks his own life (by defying his forced labor duties) and the lives of his fellow prisoners (by jeopardizing a planned uprising) to do so.

The film is told entirely from Saul’s perspective. Most of the film is shot over Röhrig’s shoulder, with the surrounding world drifting in and out of focus. Director László Nemes’ commitment to this format is remarkable.

The chaos is palpable. The Hungarian Saul and his German captors can’t understand each other. Nor can many of his fellow prisoners, who speak in a handful of European languages. It reads like a Hieronymus Bosch painting. It’s a rare Holocaust film that shows no onscreen deaths. That’s not to say nobody dies. Many do. But they die in a film told from the perspective of someone who’s seen so much death that he’s become completely desensitized to it.

Many critics have described Saul’s actions as saintly, graceful and dignified, but those same actions could also prompt dismay. When he first asks a rabbi to help him bury the boy, the rabbi tells Saul to say a prayer, and that will be enough. There’s nothing more he can do for the boy, and perhaps he could spend his energies helping the prisoners who are still alive. But Saul continues his quest, and people die in his wake.

In the moment, it’s tempting to blame Saul. But how can it be Saul’s responsibility? Aren’t the Nazi guards the ones responsible for these murders? The camp commanders? Hitler and Eichmann in Berlin, more than 500 kilometres away? All relative sense of morality and humanity becomes lost in the chaos and depravity that was the Holocaust. If his friends die so that he can bury a dead boy, isn’t that better than dying for no reason at all? Death means nothing to Saul anymore. It makes sense, then, that human life has become equally meaningless. It’s not Saul’s moral compass, but the world’s, that’s broken.

The ambiguity of the film’s morality spills over into its story. Is the boy really Saul’s son? His fellow prisoners remind him repeatedly that he has no son. Is this actually some abandoned, illegitimate child that Saul recognizes? Is he delusional? Does he look on this boy and simply feel that this is his son? If so, is he right? Does it matter? It’s a testament to Nemes’ direction that, despite the hopelessness of what’s onscreen, everything in Son of Saul always matters. 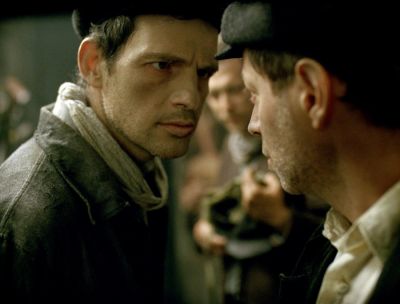