The University of Winnipeg (U of W) Greenhouse Art Lab is hosting a sewing group based around the Truth and Reconciliation Commission (TRC) report. Anybody can stop by and embroider one of the calls to action in the report onto a Canadian flag.

Helene Vosters organized the sewing group. She was first inspired to embroider the calls to action in the TRC report in 2015, but she didn’t feel right about the project at the time.

“I didn’t do it, and I felt pretty sheepish about it. Who am I, as a non-Aboriginal southerner Canadian, to take this up?” Vosters says. ”And then a year passed, and I continued to think about it, and by not interacting with it, I wasn’t engaging with the call to action.”

Vosters started working on it again and decided that she would read some of the report before and after embroidering. But doing it alone made it feel isolating, and she wanted the project to be a collective labour. That’s when she started up the public sewing group.

Roewan Crowe is the creator of the Greenhouse Art Lab, a feminist art space on campus. She’s hosting Vosters’ sewing group in her space because of her own connection to the TRC report.

“In 2009, I worked with others to co-host Justice Murray Sinclair when he was Chairperson of the Indian Residential Schools Truth and Reconciliation Commission,” Crowe says.

“At that time, I made a public commitment to the importance of education in the process of truth and reconciliation. Supporting this project and others like it is a way to honour the commitment
I made.”

According to Vosters, the group process is not quite set in stone, but there is an itinerary. The group spends the first half hour finding out who can embroider and who can’t. After an hour of work, the group starts to read the report out loud, passing it around to different people as the evening goes on.

There are some practice materials for anybody unfamiliar with embroidering, but those more confident in their skills can sew some of the calls to action on a flag.

Vosters says that engaging with the TRC report in this way has given her a new perspective on reconciliation between Indigenous people and the rest of Canada.

“I grew up as a non-Aboriginal, settler Canadian on Treaty 1 territory, and I had no idea that was even true when I was growing up,” Vosters says.

“Like what was Treaty 1 territory? I didn’t know what that meant. I had no concept of the history of residential schools. To begin to engage with the report, it’s such a horrific history, and it’s a shared history, it’s part of our shared legacy here. The importance of understanding that history is important in moving on to the next step.” 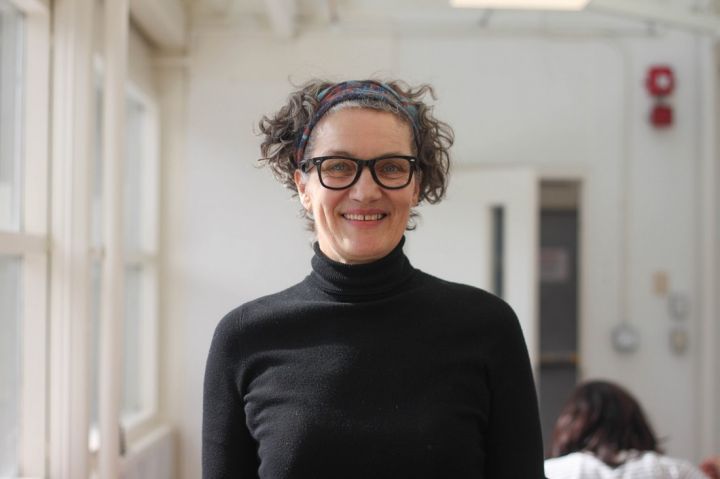 Helene Vosters is the organizer behind the sewing circle in the Greenhouse Art Lab. 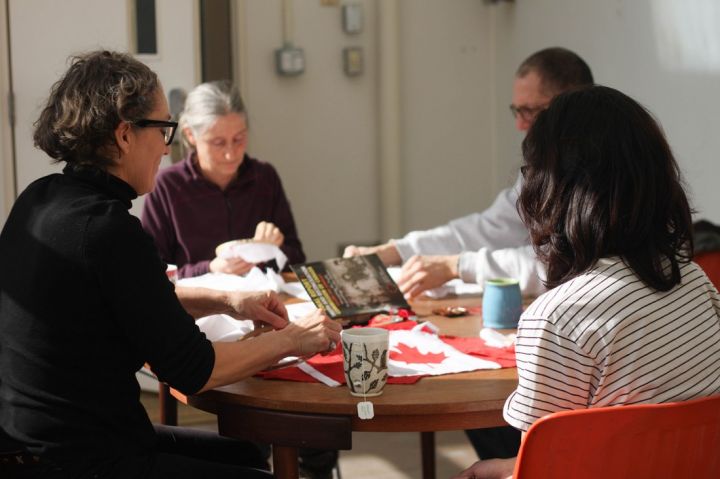 People of all skill levels are invited to participate in the sewing circle, and are encouraged to skill-share with others in the circle. 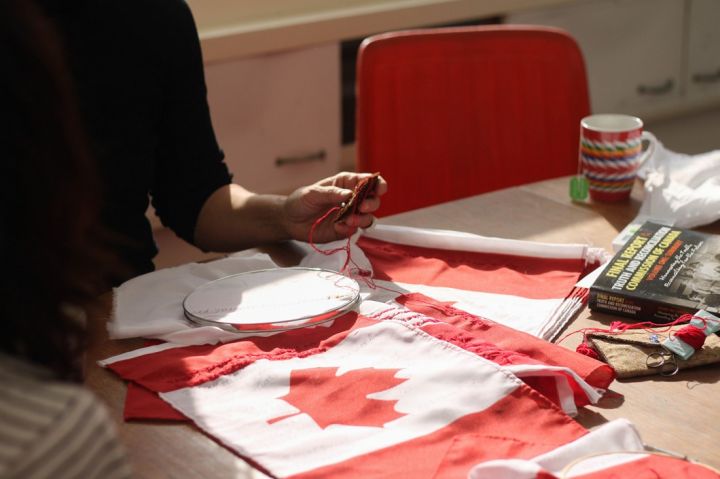 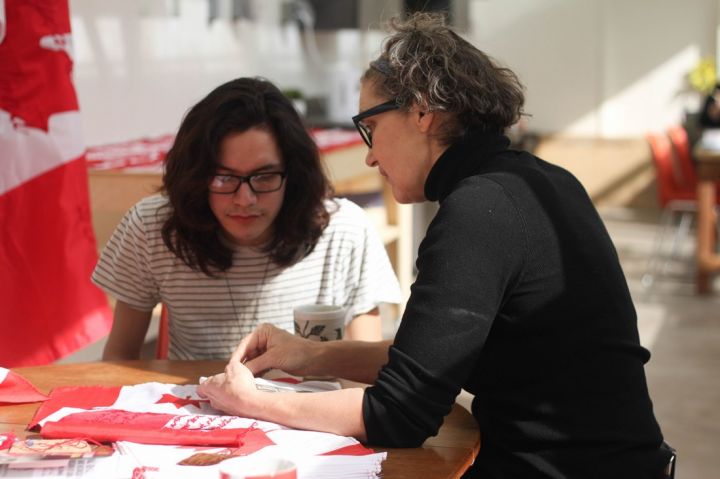 Helene Vosters helps another participant embroider one of the TRC calls to action onto a Canadian flag.

The next meeting for the sewing group is on Tuesday, March 14 at 2 p.m.