Sagrada: The Mystery of Creation

When the Spanish architect Antoni Gaudí was struck and killed by a tram car in 1926, he had already put over forty years of work into his magnum opus, the colossal Sagrada Família cathedral. Today the Barcelona church still remains unfinished, though a dedicated team of artists and craftspeople continue Gaudí’s work. Sagrada: The Mystery of Creation examines that work and the symbolic importance of the cathedral.

Like the building at its center, Sagrada is filled with a thousand brilliant, intertwining ideas. They don’t announce themselves to you, but they’re there if you’re looking for them. Gaudí’s ideas still seem radical 130 years after he proposed them. His intermingling of architecture and nature imbue the building with symbolic meaning that goes beyond Catholicism, or any specific faith. The ideals behind his work stress union and cooperation.

Generations of artists from different faiths and disciplines collaborate on the structure, highlighting the multi-generational nature of its construction. Spanish artist Josep Subirachs, an agnostic, sculpts one façade in angular opposition to Gaudí’s natural curves. Japanese stone-carver Etsuro Sotoo, another sculptor, is a Zen Buddhist who converted to Catholicism to bring himself closer to Gaudí’s perspective.

As Sotoo carves a sculpture with hammer and chisel, he insists that he isn’t an artist, and that the stone tells him what he can and can’t carve. For him, the spiritual aspect of the project comes from the meditative reality of his craft. For all involved, the process of building is the spiritual heart of the project.

The film mirrors the collaborative approach in beautiful formal touches. At multiple points, we’re shown footage of the choir singing the film’s music, for no real reason other than to remind us that there’s someone singing it. When the Pope arrives to consecrate the church, the ceremony is hollow and unrelated to the work we’ve seen. Sagrada, and its namesake, are testaments to harmony. 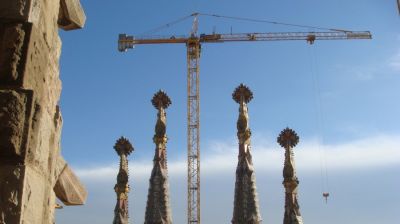