Student self-publishes book in memory of his brother

Jeremy Morantz is a Creative Communications student who studied at the University of Winnipeg (U of W) and is now publishing a book to commemorate and celebrate the life of his late brother, Nathan, who lived with autism spectrum disorder (ASD). The book is titled What Does He Dream About?

One of Morantz’s objectives is to address the perception of autism that is presented by mainstream media.

“If you watch movies or TV shows where a character has autism, they’re usually just socially awkward but gifted geniuses,” Morantz says. “That’s not my experience with my little brother who had autism. So I wanted to tell stories from growing up with my brother that would kind of ground the reader in what autism could actually look like.” 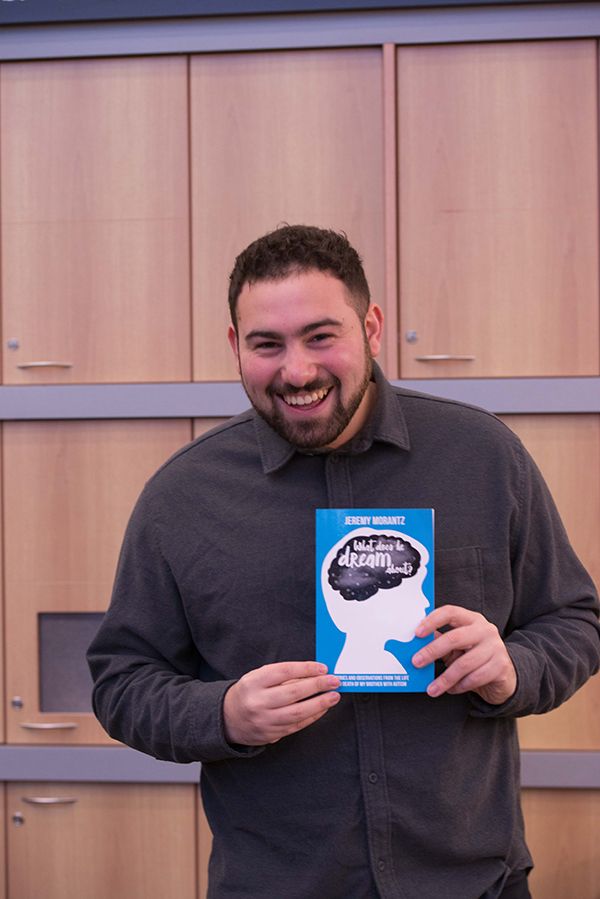 His other objective for his book is to connect with other individuals or families who are in similar situations. Morantz hopes readers can laugh with him at some of his lighthearted stories, but he also says there are emotional elements as well.

“The book deals with topics of grief, because in 2016, my brother passed away,” he says. “So in a way, it’s like a nice little bow on the story that was his life.”

McNally Robinson is hosting a book launch for What Does He Dream About? on Feb. 10, which is known as Autism Sunday.

“In my mind, Autism Sunday is a day for us all to stop and think for a moment about those who are on the spectrum and all the value that they can provide to society through their happy and charming personalities,” Morantz says.

He says all the profits from his book are going to the Nathan Morantz Respite Care Fund, which was set up by his parents to help families who need help paying for respite services.

“It can be a hectic experience taking care of someone constantly who is on the spectrum, and that’s where respite workers come in,” Morantz says.

He explains respite workers take children with ASD out to do certain activities, giving parents a short break.

“A lot of families need that but don’t have the means to access it,” he says.

Morantz feels autism and mental disability aren’t involved in discussions of inclusivity as much as they should be.

“The U of W is known throughout the city as being an inclusive place when it comes to gender identity and race, but I don’t think special needs is often wrapped into that conversation as much,” he says.

Inga Johnson Mychasiw, the director of student support services at the U of W, says Accessibility Services provides an array of accommodations for students with both physical and mental disabilities, ASD and otherwise.

“We provide instructors with general information about ASD to encourage understanding and empathy regarding the needs of students with autism,” Mychasiw says. “We create an environment where students can feel supported and are able to develop the self-advocacy skills necessary to communicate what works best for them.”

Mychasiw also says the U of W does not have a specific role in advocacy for specific disabilities and health conditions, but she encourages the community to educate themselves and challenge stigmas surrounding autism.

“We can all treat one another with respect as fellow members of our community,” she says.

Jeremy Morantz’ book launch at McNally Robinson will be on Feb. 10 at 2 p.m.