Of Truth and Magic

While doing some research on Of Truth and Magic, the new short film by Winnipeg director/puppeteer/musician Curtis L. Wiebe, I came across the following quote from Julian Barnes: “…love is the meeting point of truth and magic. Truth, as in photography; magic, as in ballooning.” Despite the straightforward nature of the quote, and the fact that at least one moment in the film involves both photography and balloons, I still asked myself, “Could it be a coincidence? What does it mean!?”

This is a testament to the phantasmagorical power of this truly wonderful film. Wiebe’s story involves an investigation by the Department of Unusual Occurrences, a clandestine organization searching for an agent (Andrea Kampen) who disappeared while on the trail of magician Autumn Greywooly (Wiebe). Wiebe’s filmmaking is firmly in the tradition of such Winnipeg Film Group legends as Guy Maddin and John Paizs, utilizing cinematic language and conventions of bygone eras to explore surreal and magical themes. But he’s not just cribbing the style of his predecessors; Wiebe is a unique and exhilarating filmmaking voice, blurring the lines between photography, puppetry and animation to create a tactile cinema of light, shadows, and smoke that feels simultaneously classical and outside of time entirely.

Wiebe wears his influences on his sleeve, and they cover all of film history. His playful magic recalls George Méliès. His creepy surrealism evokes Buñuel and Dali’s collaborations. The spy elements are equal parts ‘50s sci-fi and The Manchurian Candidate. Greywooly is straight out of Tintin. But he’s not making references - he’s an original and unique filmmaker with the history of cinema running in his veins.

Hear this: nearly six months into 2014, Of Truth and Magic is the best film of the year thus far. It packs more ideas and creativity into its 20 minutes than any Canadian feature this year.

Of Truth and Magic premieres at Cinematheque on June 25 preceded by a program of Wiebe’s earlier shorts and a short doc about him. The same program plays June 26. 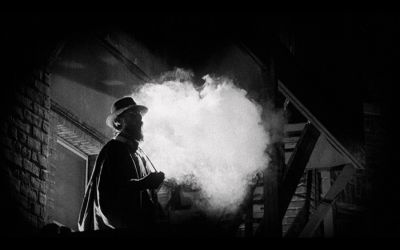