I had a bad feeling during the first few scenes of Nightcrawler. Between the stilted dialogue, heavy-handed media satire and Jake Gyllenhaal’s “look how creepy I am” performance, the film almost totally lost me. “Oh no,” I thought. “Here’s a movie that’s trying way too hard to be something, instead of just being what it wants to be.”

As the picture rolled on, I cared less and less about its overreaching. As the movie’s scope and ambition grows, it evolves into its didacticism and cynical worldview. It still makes mistakes, but it earns the right to make them by being ambitious and interesting.

Nightcrawler tells the story of Lou Bloom (Gyllenhaal), a demonic and manipulative sociopath who works his way up in the competitive, despicable world of freelance crime journalism in Los Angeles. He films the aftermath of murders, car crashes and robberies with the help of a homeless and possibly drug-addicted prostitute (Riz Ahmed), and then sell their wares to the local news.

As a news satire, Nightcrawler owes a lot to Network, Paddy Chayefsky’s 1976 classic. While I love that movie, sometimes Nightcrawler’s aspirations hurt more than they help. The dialogue from first time director/long time screenwriter Dan Gilroy (Real Steal, The Bourne Legacy) is so committed to making satirical points that it forgets to serve any other function. Nina (Rene Russo) says things like, “I don’t care about morality, only ratings!” out loud, multiple times. Even in this bizarro world, I didn’t buy it.

But the deeper you go with Nightcrawler, the more the good outweighs the bad. Gilroy’s nocturnal LA is as scary and gorgeous as any Michael Mann film. Gyllenhaal grows into Lou’s wormy amorality: his character, who initially feels like a narrative construction, becomes a truly threatening monster without changing all that much. And the film’s climactic car chase is the best I’ve seen in years. 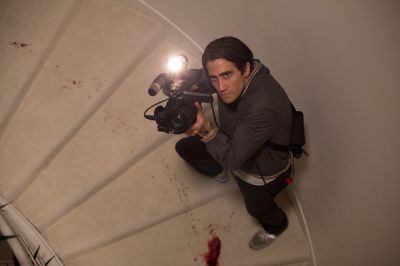