Plays November 1 to 2 and 6 to 7 at Cinematheque

The term “neo-neo realism” has been used by some to describe director Kelly Reichardt’s style. Her use of long takes, naturalistic performances and minimalist editing in Wendy and Lucy and Meek’s Cutoff have made that style the defining characteristic of her work over story or genre trappings. Even Meek’s Cutoff, which could have been a standard western, defies genre classification. In her newest, Night Moves, she’s managed to make a tense and suspenseful thriller that never betrays her style.

Night Moves is the story of three militant environmentalists (Jesse Eisenberg, Dakota Fanning, and Peter Sarsgaard) who are plotting an act of eco-terrorism. All three leads give spellbinding performances. After The Social Network, audiences anticipated a slew of meaty Eisenberg performances. Instead we got 30 Minutes or Less and Now You See Me. Here he finally delivers on that promise.

The movie explores the intersection between compassion and criminality. The radical anti-heroes are passionate about their cause, but there’s a sense that their extremism has less to do with environmentalism than it does their own issues. Harmon (Sarsgaard) is an ex-marine who seems a little too cavalier for his own good. Josh (Eisenberg) is isolated and paranoid. When their scheme doesn’t go as planned, Josh’s paranoia reaches a fever pitch. Dena (Fanning) reacts with unhinged nerves that make her just as much a wild card as the other two.

Night Moves is a damn timely movie. It examines the creepy, cult-like undercurrent that runs in this particular brand of Oregonian neo-hippie culture, with its communal farm co-ops and earnest documentary films walking in tandem with doomsday prophecies and zealous doctrine. It takes a little more than a love of wildlife to make someone want to blow up a dam. Reichardt understands that darkness, and molds it into a satisfying slow-boil of paranoia. 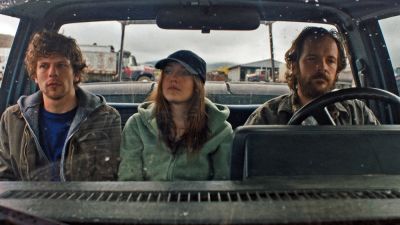