There’s a new DIY community space opening up in Winnipeg’s West End near the University of Winnipeg.

Inspired by Mondragon, Winnipeg’s now-defunct anarchist café and bookstore, and the A-Zone (the Old Market Autonomous Zone, which housed Mondragon at 91 Albert St.), the B-Zone Grassroots Social Centre aims to open its doors this October at 588 Ellice Ave.

Stephen Kirk is one of the people who have been developing the project and space over the last two years.

“Since Mondragon folded, I don’t think there has been a space in the city that has the same kind of character of being explicitly connected to the struggle and to the values of social justice, traditionally left-wing values,” he says. 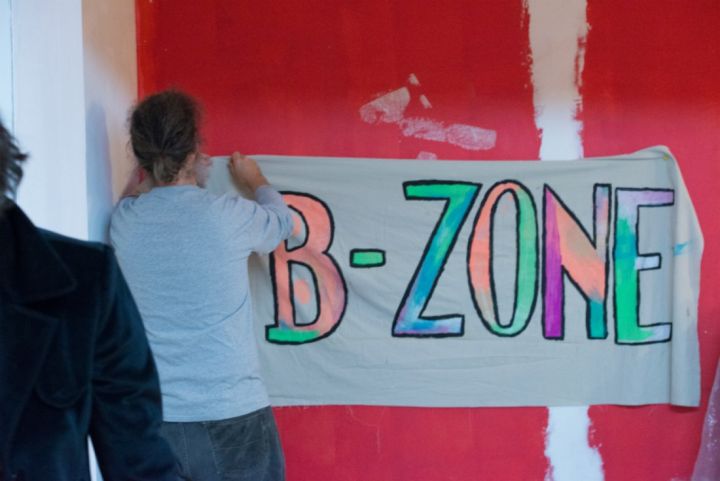 The B-Zone at 558 Ellice Ave. takes inspiration from Mondragon and will open in October.

B-Zone hopes to fill that void. The space will be part library, with radical books and zines and seating space for comfortable reading, and part venue and community space, with a kitchenette and a long table for meetings or gatherings.

Gwen McAllister, another member of B-Zone’s start-up committee, insists that the primary goal of the space is to strengthen community.

“It’s meant for anybody in the neighbourhood but particularly for people who have an interest in organizing, in alternative ways of doing things, in DIY (and in) social justice,” she says. “The space is meant for people to use, whatever they want to do that builds community.”

Some ideas they have for the space include hosting potlucks, skill shares, speakers, cooking classes, small music shows, craft nights, movie screenings and women-only nights. But they are open to other kinds of events or gatherings, dictated by the needs and wants of the community.

“We’re hoping that the space itself will carry a certain set of values like respect for diversity and opposition to authority and a demand for social justice,” Kirk says. “Even if we don’t know exactly what’s going to happen.”

Their “business” plan reflects these values and the start-up committee has rejected traditional capitalist, commercial models. They hope to cover rent, utilities and maintenance costs with fundraising events, space rentals and a subscription model.

“Suggested donation and sliding scale are going to be our model,” McAllister says. “People don’t need to buy something to be here.”

Kirk and McAllister compare the committee’s vision for the B-Zone to the concept of “the third space.”

“If you look up the third space, (it’s) a place in the community that isn’t work and isn’t home but people can feel welcome there, regardless of whether or not you’re buying, selling – where your position is not based on being a consumer,” Kirk explains.

“Our hope is to be more of a fun, comfortable hangout place as opposed to a resource centre,” McAllister adds.

The B-Zone encourages members of the community to drop by Wednesday evenings from 6-8 p.m. to meet start-up committee members and check out the space. Help painting and furniture donations are also appreciated. They welcome event proposals in-person or by email at b-zone@riseup.net.

The B-Zone will also host a Mondragon Documentary Premiere on Sept. 28 starting at 6:30 p.m. at 588 Ellice Ave. The event is family-friendly.