The word ‘sustainability’ gets tossed around quite a bit these days, but defining what it really means in a practical sense is both difficult and debatable.

For the folks at local award-winning design company Syverson Monteyne Architecture (SM-ARC), envisioning sustainable development – from conception to reality – is a part of their job description.

At this year’s Winnipeg Folk Festival, SM-ARC’s collective vision helped to define what it means to design and develop infrastructure with a creative, dynamic interpretation of responsible building.

The festival celebrated its 40th anniversary this summer with an unveiling of the completed second component of its three-phase site development project.

“It’s really the first time the public has seen any changes so it was a nice time, our 40th anniversary, to kind of unveil and reveal these things,” notes Cheryl Sluis, WFF’s Manager of Volunteer Services and Strategic Initiatives.

There were several factors driving a need for improvements to the site, as Sluis recounts. “Six or seven years ago, there were a number of things that were sort of the impetus for the project. One of them was a little bit of pressure from our Health Inspectors to upgrade our food services... [and] we signed a long-term lease with the Park.”

Any proposed changes to the site were contingent upon the festival agreeing to a multi-year lease with the Provincial Park. “We would’ve taken a different path if we had year-to-year leases, because the investment was substantial” Sluis says.

The scale and complexity of the project means that there have been many local companies playing various roles since the initial concept of the Site Plan was envisioned – and they’ve all had to consider the requirements of regulatory bodies, along with the WFF’s consensus objectives, factors which quickly became problematic.

“Inside the master plan were these lists of principles, or lists of things that we had to keep in mind, and one of them said the festival has to be able to expand, contract, or stay the same,” says Tom Monteyne, Principal at SM-ARC. “In other words we had to design for every eventuality that could possibly happen, which is impossible.”

Incorporating both WFF’s vision, and complying with Manitoba Conservation regulations – which the area is subject to – meant a lot of considerations surrounding the impact on the natural ecosystem.

“ As a designer you have to be responsible for the whole arc of something… to think about when it becomes no longer useful, how does it get disposed of?  Or, can it be recycled, can it be re-purposed?  I think that is true sustainability.

“The park is more comfortable with non-permanent structures because one of their mandates is conservation of nature, so if someday there was no festival there, the idea that the site would return to nature is something they like,” Monteyne says. This thought was consistent with WFF’s desire to consider their ecological footprint.

“There was the Folk Festival’s functional requirements, but there was also their desire to tread lightly, to have a low impact, to be environmentally responsible,” Monteyne says. “Right at the very beginning that was always one of their values.”

Clearly, having shared values among team members has been a running theme. With WFF as the client, the Provincial Park as the site, and the team assembled by SM-ARC, those collective guiding principles informed the project’s direction.

“It made sense here because it’s also kind of a sustainable design principle” Monteyne notes. “That cradle to grave idea, you know, where as a designer you have to be responsible for the whole arc of something... to think about when it becomes no longer useful, how does it get disposed of? Or, can it be recycled, can it be re-purposed? I think that is true sustainability.”

The structures on the site designed by SM-ARC certainly embody those ideas. The largest of these is La Cuisine (2012 Prairie Design Award of Excellence), used as a multi-purpose building. It serves as the festival kitchen where thousands of meals are prepared each day for performers and volunteers, as well as a storage facility and a place to congregate backstage under its expansive front porch space.

It’s close to 7000 square feet, yet has no concrete foundation, which speaks to the innovation of the design. The SM-ARC website description reads, in part: “Syverson Monteyne designed La Cuisine using repurposed and recycled materials including components from an existing steel industrial complex that was slated for demolition, salvaged hydro poles, and reclaimed cedar decking. The design also incorporates deliberate use of festival iconography – the front façade of the building features different colours of sheet metal to symbolize the memorable way tarps are used at the festival each year.”

Monteyne, along with SM-ARC Associate Fletcher Noonan and construction manager Gerry Humphries of Milestone Project Management, were able to locate, measure, purchase, and then disassemble a local steel warehouse structure in order to re-use the parts, so one day La Cuisine may be disassembled and re-purposed.

Even though it is a massive industrial structure, it has a built-in sense of responsibility; it can be relocated and reused, while leaving barely a trace of impact.

It is this type of leadership, this visionary trend-setting, for which La Cuisine has gained recognition abroad. “We were up against projects with budgets that were a hundred times bigger… multi-million dollar projects,” Monteyne recalls of the Prairie Design Awards. “And it won first prize in the commercial building category. I mean, we were amazed… the competition was incredible.” 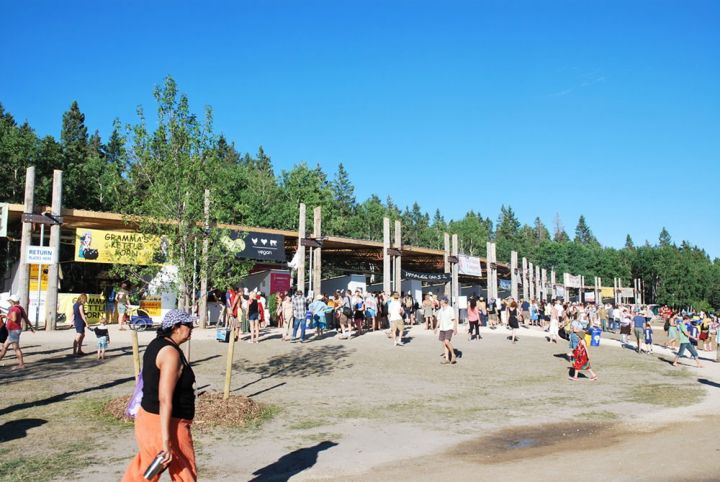 The new Serpentine structure that houses the food vendors which SM-ARC designed as part of phase two of the project, also used reclaimed materials when possible. These included salvaged hydro poles (a design theme running through the entire site), and trusses that were taken from an area Safeway that was being demolished. Though the structure isn’t as elaborate as La Cuisine, it’s no less important as part of the re-design of the common area of the festival site.

At first the food vendors were anxious about the new structure being further away from the main stage – and how that might affect their experience and business – but according to both Sluis and Monteyne the response from all parties has been positive.

Being conscious of the new location, acknowledges Sluis, “a lot of energy and thought [went] into how that village area became a community and brought people together, and it kind of is almost a curated area itself, so people didn’t mind coming the extra distance.”

So far the feedback from volunteer crews, audience, volunteer and vendor surveys has been overwhelmingly positive.

“Everyone was kind of in the space, using it like a public space, the way [they’re] meant to be used,” Monteyne says. “It was just really gratifying to walk in there and to see people using it exactly the way it was thought of.”

Check out Syverson Monteyne Architecture’s projects at www.sm-arc.com, stay tuned for features about other companies involved in the WFF site project, and a sneak-peak at phase 3, in future issues. Send feedback to brian@uniter.ca