Maps to the Stars

Maps to the Stars, the newest feature from celebrated Canadian director David Cronenberg (The Fly, A History of Violence), has a lot in common with last year’s Birdman. Both films are showbiz satires employing ensemble casts. Both dip their toes into surreal, hallucinatory netherworlds of egomania. They’re also both packed full of unfinished ideas that indulge the worst instincts of their respective directors. While not as entertaining as Birdman, Stars is equally as confused.

The film follows the intertwined lives of various Hollywood has-beens, child stars, therapists, agents and limo drivers, all of whom are teetering on the brink of insanity. All the actors deliver excellent performances. Mia Wasikowska (In Treatment, Stoker), who plays the enigmatic burn victim Agatha, reaffirms her status as one of today’s most interesting young screen performers. Even Julianne Moore (Boogie Nights, Still Alice), whose constant hysteria has grated on me recently, is effective as a doomed actress struggling to keep her career (and her family’s Hollywood dynasty) afloat.

Each of these characters’ individual stories is interesting on its own. But screenwriter Bruce Wagner tangles them together into one of those cliché, everything-is-connected plots that seemed to infect every American indie of the late ‘90s. His ham-fisted dialogue is so busy trying to be clever and poetic it forgets to function as dialogue. He injects elements of hallucination, psychosexuality and incest that have nothing to do with Hollywood, but instead feel like a half-hearted attempt to give the story more dramatic weight than it earns.

Cronenberg’s visuals here are pretty, but never creative. As always, he’s good with actors. He and his cast manage to wring great performances out of Wagner’s weak script. But he never makes Stars feel like more than the sum of its parts. The dreadful undercurrent of inevitable violence, present in all his films, doesn’t come from anything onscreen in Stars. It just comes from the knowledge that it’s a Cronenberg film, and someone or something has to die. When a Cronenberg movie can’t make psychosexual violence interesting, something’s not working. 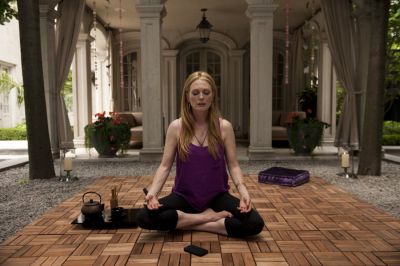