60-something friends Billy (Michael Douglas), Paddy (Robert De Niro), Archie (Morgan Freeman) and Sam (Kevin Kline) have been best friends since childhood. So, when Billy finally proposes to his 30-year-old girlfriend, the buddies decide to have a grand bachelor party - in Las Vegas! However, the majestic Sin City begins to test their friendship in ways they couldn’t imagine.

As the baby boomer generation of actors start to become seniors the “old men attempting to relive their youth” plot becomes much more apparent in Hollywood Cinema. Last Vegas attempts to be a geriatric version of The Hangover, but replaces crude and sexual humour with jokes about aging. While those jokes are funny at first, they eventually become too much and by the millionth “haha you’re old” joke I was ready to chuck my popcorn at the screen.

Considering the film stars De Niro and Douglas, and takes place in Vegas, you would think Last Vegas would have more edge, but instead it’s a light and fluffy comedy that never does anything exciting with the conflict between Billy and Paddy (Billy failed to attend Paddy’s Wife’s funeral). Product placement is everywhere in this picture, the director is so shameless he puts the Aria logo in almost every shot. It’s as if Last Vegas is a feature length tourist commercial. The only real saving grace of this film is the acting; Douglas, De Niro, Freeman and Kline can all play convincing characters, even in a film with atrocious writing. 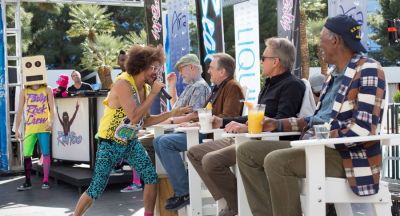