Meet the people who keep your university running 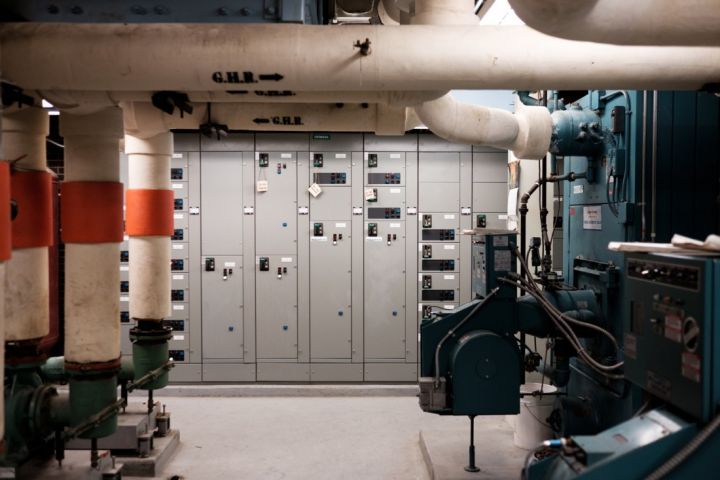 Heading back to school can be a flurry of commotion, of logistics, schedules, new faces and places. In all this bustling, it can be easy to overlook the work it takes behind the scenes for the campus to be ready for us.

The University of Winnipeg campus has grown to fill 1.66 million square-feet, and all of those buildings are maintained by Physical Plant and their staff of 33.

“And then we have another section of facilities in Physical Plant which is called engineering, and under there they look after all the mechanical systems, the plumbing and the electrical.”

Physical Plant responds to calls for everything from stuck lockers to broken doors, from adjusting temperatures to building a greenhouse, and from planting flowers to setting up events small and large.

If that doesn’t sound like much, think of what would change if, for a week, there was no Physical Plant. Temperatures would start to fluctuate, toilets would break, garbage would start to accumulate. Fire alarms would ring and never be silenced. Eventually, campus could start to resemble a ghost town.

“The grass would be really long in the summertime. There would be no plants. The plants indoors would die. The lights would slowly go off. The furniture would move itself and never return to its home,” April Keenan explains. As a Service Worker 3, Keenan stays busy with all kinds of odd jobs around campus.

“Every day is different. We go outside, we’re inside, we’re setting up, we’re tearing down events, we’re trying to do maintenance on top of all that, so changing the lights on the entire campus, checking the classrooms before school starts,” Keenan says.

It all adds up to a very active day, which is one of the perks of the jobs. After a full day at work, Keenan never needs to go to the gym. She won a fitness challenge on campus by averaging 20,000 steps in the course of a day.

“The next year they changed the wellness challenge so you had to go to the gym. So I didn’t win that year,” Keenan says. 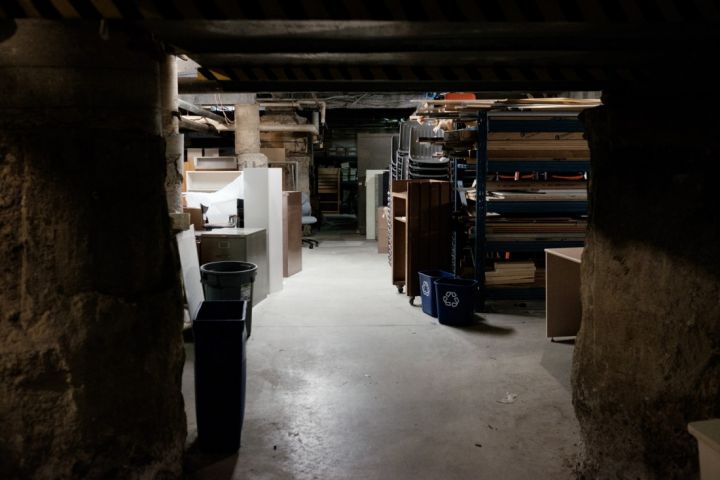 In the off-season, Physical Plant hires summer students, which is how Keenan got started in her work. They’ve attracted many members of the Wesmen, especially the wrestling team, to help out with groundskeeping, maintaining the lawns and preparing flower beds.

“That’s a good job for them because then they’re still active and moving, and we’re very physical in Physical Plant,” Keenan says.

The concept of an average day doesn’t really exist for Physical Plant staff, even for those who may be more specialized.

Harald Weigeldt is the carpenter for Physical Plant, and while his background is in cabinet making, he often works on doors and made crucial repairs to the historic stained glass window piece, Theology, in Bryce Hall.

“There’s also requests for special projects. The greenhouse in the new science building, they needed a place to overwinter some of their plants, so I built a shed for them up there,” Weigeldt explains.

“And they also needed somewhere with a bit of shade ‘cause it’s really hot up there with the southwestern exposure, so I also built a pergola structure for them.”

Many Physical Plant staff will attest that the work itself isn’t always difficult, but figuring out how to carry out the tasks in the middle of a busy university can be challenging. They’ll tackle the loudest jobs, or those in very public areas of campus, first, and finish those between 7 and 8:30 a.m.

And while campus may have been much more crowded when it was smaller, the expansion of the last few decades brings its own quirks.

“When I first started here, there was nothing. Centennial was built, the Duckworth Centre wasn’t there – that came in two years after,” Gil Pelletier, one of the engineering team, says. “It’s grown leaps and bounds. But the different ages, it makes it tough because you’ve got aging infrastructure.”

Throughout campus there’s a mishmash of different heating systems, different building styles, and in some of the older buildings, staff need to be wary of asbestos. A new computer system that allows Physical Plant to make adjustments remotely has improved the heating system overall, but staff may still take the time to add that personal touch when responding to a request.

“Most of the time we can fix it up at the computer, but I always like to go up and talk to the person. Because then they know you’ve been there. I leave them a little note on their desk if they’re not there,” Pelletier says.

All work requests come through Thul’s office, through himself or Donna Marchak, the Physical Plant office assistant.

“In some cases, a slow day might have 10 or 12 requests. Other days it could be 25. Some of them are fairly simple and easy to deal with, others are much more complex, challenging,” Thul explains. “We keep ‘em busy, but we don’t run them into the ground. I mean all of our staff is busy, they all work very hard.”

The ironic twist to all of the work done by Physical Plant is that if it’s done well, no one on campus might even notice that it’s happened. You may see the staff walking about from job to job, in blue-collared shirts with the university’s emblem on the pocket, and not even know who they are, or what it is they’re working on.

“Yeah, we do a lot of stuff that people don’t see, like April (Keenan) and her gang, moving stuff around,” Pelletier says. “Without those guys, you know? Yeah, you’d notice.” 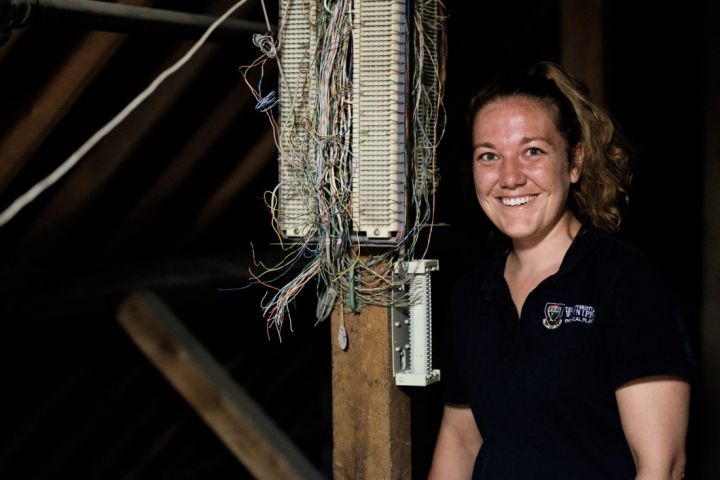 HOW LONG HAVE YOU WORKED WITH PHYSICAL PLANT?: “I started in 2006 and I started as a summer student with the Physical Plant. So I did that for three summers and then I applied for a full time position that came up.”

BEST THING ABOUT YOUR JOB: “I really like the flexibility. I’m not tied down to one office. I have access to everything.”

MOST INTERESTING WORK DAY: “I was here when Centennial Hall, well, the entire campus lost power. One of the generators in Lockhart Hall blew up and we just heard a loud bang and then the entire campus was shut down. It was the only day that they sent people home. That was an interesting day. But Physical Plant stayed.”

WHAT KIND OF CHANGES DOES BACK TO SCHOOL BRING FOR YOU?: “It’s harder to do my job when the hallways are cramped...during class change is not the best time to move a box or move a bunch of boxes. When they get in their classes, then I’ll come out. So if you don’t see me, I’m hiding in between class breaks.” 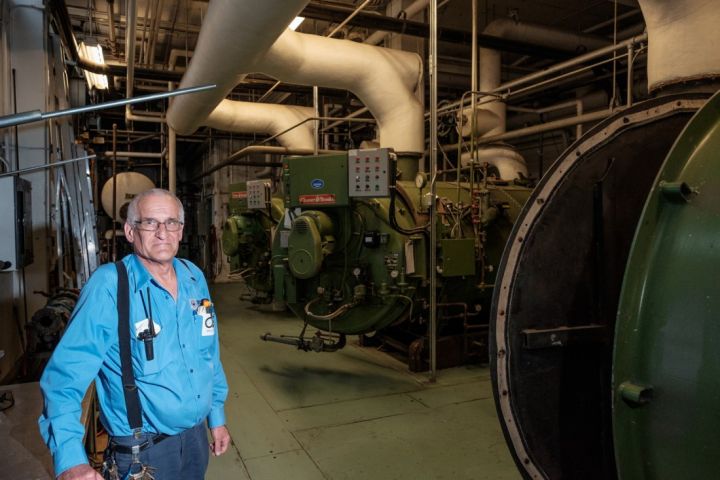 BEST THING ABOUT YOUR JOB: “What I really like about it is every day is different. Different problems come up.”

MOST INTERESTING WORK DAY: “Every time they open up a new building is kind of neat. And there’s been lots of them since I’ve been here. When the (Richardson College for Environment and Science Complex) came on, that was quite the building.”

WHAT KIND OF CHANGES DOES BACK TO SCHOOL BRING FOR YOU?: “The biggest call I get is ‘I can’t open my locker’. And what they have to do is lift it up, because they try to pull it, and then they bugger it up. So they have to lift it up.” 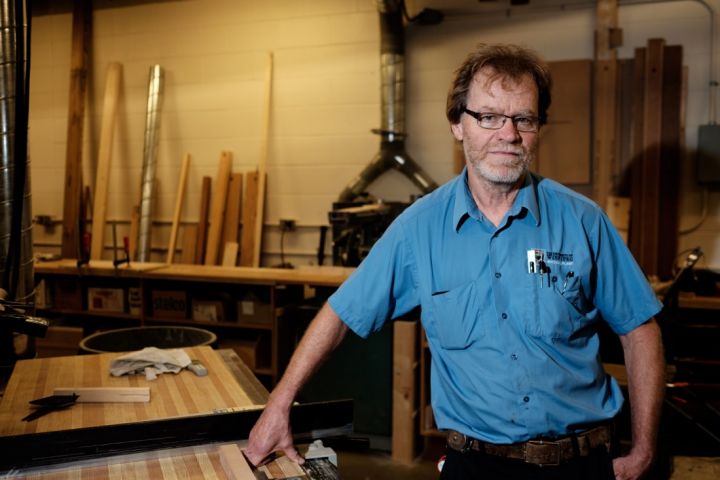 HOW LONG HAVE YOU WORKED WITH PHYSICAL PLANT: “I started in ’98, so about 16 years.”

MOST INTERESTING WORK DAY: “I’ve really enjoyed watching the RecPlex building going up. It was really interesting seeing how it went from a hole in the ground to the finished state, and all the structure that goes into making that thing stand up.”

WHAT KIND OF CHANGES DOES BACK TO SCHOOL BRING FOR YOU?: “Obviously more students on campus, really there’s not that much changes for me, other than the halls are more crowded, which is why we’re here – we’re here to keep the place working, and students are why we’re here.” 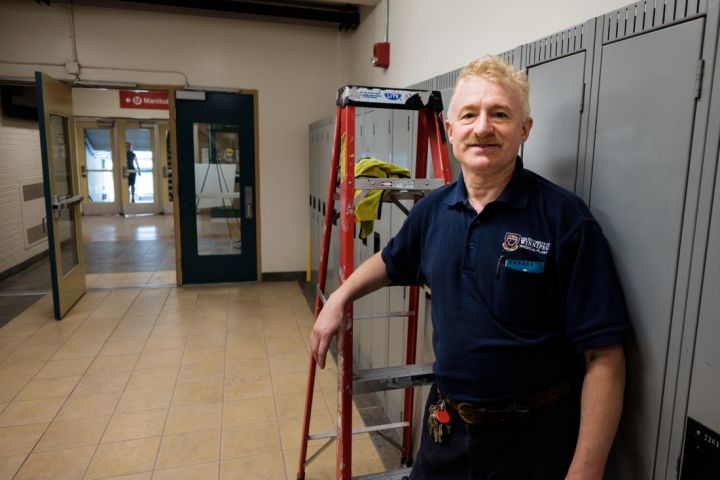 HOW LONG HAVE YOU WORKED WITH PHYSICAL PLANT: “Four years.”

BEST THING ABOUT YOUR JOB: “Every job, for me, is good. Sometimes I work the night shift, (driving the van) is needed to pick up something, musicians, conservatory students. I pick up musicians, instruments, drums, everything, and I help.”

MOST INTERESTING WORK DAY: “For me, it’s everything. Every job for me is good.”

WHAT KIND OF CHANGES DOES BACK TO SCHOOL BRING FOR YOU?: “(In) September, I take vacation.”

HOW LONG HAVE YOU WORKED WITH PHYSICAL PLANT?: “I’ve been here since 2007.”

BEST THING ABOUT YOUR JOB: “I think the dedication of our staff that we have is by far very exceptional. Everybody wants to and tries to do the best that they can. They’re looking for opportunities on how to improve themselves, how to improve the university, and enjoy their job.”

MOST INTERESTING WORK DAY: “Last year when we had the flood on August 28, at the end of the day, and came back to the campus and 15 buildings had been damaged by flood one week before the start of school. And trying to get all the work and co-ordination to get that fixed up before, so that it was usable for when students came back.”

WHAT KIND OF CHANGES DOES BACK TO SCHOOL BRING FOR YOU?: “Back to school kind of allows us to get back into our normal routine.”