In 2005, Casino Royale made the Bond franchise relevant again. After veering far off course with Die Another Day, the introduction of Daniel Craig took the series to darker and grittier territory more in line with 21st century tastes. Kingsman: The Secret Service is a throwback to perhaps the least 21st century era of Bond: the Roger Moore era. The Moore films of the ‘70s and ‘80s were campy and cartoonish, with a focus on silly supervillains and outlandish gadgets. Kingsman is an enjoyable love letter to Roger Moore camp, encompassing all the best (and worst) aspects of silly spy films.

Colin Firth (The King’s Speech) stars as a member of the Kingsman, a spy agency that also includes Michael Caine (The Dark Knight Rises) and Mark Strong, (Sherlock Holmes) who I think might be legally obligated to appear in all English spy movies. The Kingsman is looking for new recruits, which leads it to Eggsy (Taron Egerton), a working-class thug too smart for his neighbourhood of pubs and housing projects. The whole cast has lots of fun with the material. Firth channels Moore’s goofy charm and dignity. Samuel L. Jackson (Django Unchained) hams it up as the villain, and a scenery-chewing cameo by Mark Hamill (Star Wars) is too weird not to love.

The film is not without its flaws. Director Matthew Vaughn (Kick-Ass, X-Men: First Class) has a spotty filmography, and he repeats some of his worst tendencies here. He takes a glee in gruesome violence that Bond never has. The script sometimes gets too self-referential, feeling more like Austin Powers than a tasteful homage. His overuse of computer effects and greenscreen is obnoxious, and his audacious camera work is distractingly flashy. But Kingsman packs too much inventive action and spy flick fun to ignore. It’s basically Octopussy meets Scott Pilgrim. If that sounds as fun to you as it does to me, then this movie is probably for you. 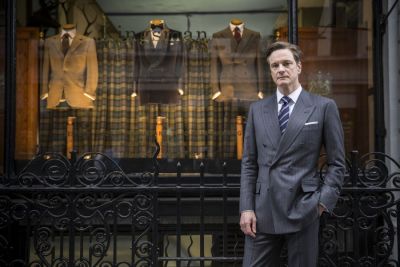