Keeping up with inclusive language

A note from The Uniter’s copy and style editor

Language changes over time, Jennifer Clary-Lemon says. Now, the words people use to describe themselves and the world around them are evolving faster than ever before.

“Language is always dynamic. It’s never something static. It always changes,” the University of Winnipeg rhetoric professor says. “I think we’re living in an age in which information travels in a much faster way, and so language change that maybe in the past would have taken a lot longer … is happening much more quickly, because we’re exposed to one another and the way that people use language.”

Clary-Lemon says part of that exposure involves learning how people identify themselves and why, something she notes is especially important for journalists.

“I think it’s important for journalists to do the work of keeping up on what people want and how they’re using language and not sticking by what’s always been done,” she says.

“Part of good journalism comes from being aware of language,” Clary-Lemon says. “I think one thing journalists can do is have their pulse on those changes and not be afraid to go with those changes, as opposed to using older methods simply because that’s what folks in power liked the best.”

At The Uniter, we hold our writers accountable for accurately, fairly and respectfully representing the people, events and organizations we interview and cover. So, as language changes, we try to change along with it.

That’s why we, The Uniter’s editorial staff, are updating our in-house style guide (a list of dos and don’ts for our contributors). We’ve made a few changes so that the terms we use are more inclusive and better reflect how people identify themselves.

For instance, we’re replacing “aboriginal” with “Indigenous” after hearing suggestions from Indigenous communities. Instead of calling someone a spokesman or a chairwoman, we’ll call them a spokesperson or a chairperson. We also encourage our reporters to begin every interview by asking for an individual’s pronoun, just as they would their name and job title.

While these may seem like minor tweaks, the words we use to talk about each other can have a profound impact. Reece Malone, the education program coordinator at the Rainbow Resource Centre (RRC), says language helps us make sense of who we are.

“We’re still heavily immersed in a culture that censors and pathologizes human sexuality,” he says. “The more we destigmatize identities, the more we see language emerging that is more reflective of the realities of people’s lives.”

To better reflect how people identify themselves today, The Uniter will now use LGBTQ+ as a house acronym instead of LGBT*. RRC uses a similar acronym that also incorporates a plus sign.

“The plus sign is a positive reflection of diversity of identities including a historical reference to the impact that HIV has had on the community,” Malone says.

It replaces the asterisk because, as Malone emphasizes, “people aren’t footnotes.”

He suggests people have an open approach to language and advises everyone – reporters included – not to memorize terms but to listen to what individuals say about who they are.

If you have any suggestions for how we can improve the language we use at The Uniter to be more respectful and inclusive, contact Danielle at style@uniter.ca. 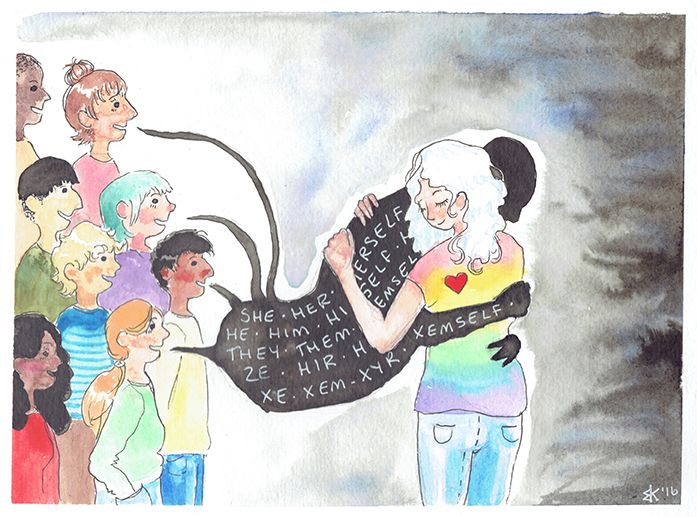