Now that summer is finally here, Winnipeggers are flocking outside in their T-shirts and shorts. But warmer weather has its dark side too – the risk of getting uncomfortably, even dangerously, overheated. To help avoid a medical emergency, here are some tips for keeping cool.

“When we are experiencing excess heat, our bodies try to cool through increasing blood flow to the surfaces,” Dr. Heejune Chang, a public health physician with the Winnipeg Regional Health Authority, says.

Blood vessels expand to release heat, which passes into the sweat and out into the air when the sweat evaporates.

“If you don’t take in enough fluids, then the excess sweating could cause fluid loss,” Chang says.

Water is the best choice, according to Chang. Other fluids are fine, but don’t count that cold beer – alcohol actually dehydrates the body.

Check the weather – including the humidity.

“Whatever you’re going to do that day, check the weather,” Chang says. “It might be 10 degrees hotter or way more humid today than it was yesterday.”

Winnipeggers should keep an eye on the news for heat advisories. On really bad days, anyone working or playing outdoors may have to take it easy or stay out of the sun. The most dangerous time of day is between 10 a.m. and 2 p.m.

In humid weather, people have a much harder time sweating.

“When you listen to the radio broadcast they will tell you, the relative humidity and the temperature is like this, but it actually feels like a higher temperature,” Bob Reside, an advanced emergency care instructor with the Canadian Red Cross, says.

Know the symptoms of heat-related illness – and how to help

Muscle cramps and heat rash are some of the earlier symptoms. A person can faint from low blood pressure, or develop heat exhaustion when the body can no longer control its temperature. Someone suffering from heat exhaustion may feel tired, dizzy, nauseous, or weak. They may even vomit.

At this point, the solution is simple: “Cool them down, get them to stop doing (physical) activity for a few minutes, and give them some cold beverages to drink, preferably without caffeine,” Reside says.

But doing nothing can lead to heat stroke – a medical emergency.

“Their body temperature gets really high, so it’s 41 degrees Celsius,” Reside says. “They stop sweating at this point, because their body has no more moisture in it. And so their skin gets red, it’s hot, and it’s dry. And in this case, they usually will eventually lose consciousness, just because their body’s starting to shut down. Their pulse is weak and rapid, and their breathing isn’t as good as it normally is, so it tends to be shallow.”

Heat stroke can also make someone confused or behave strangely.

Call 911 in a heat stroke emergency, but also cool the person down with fans, a wet towel or shirt, or ice on the abdomen, under the arms, or between the legs. 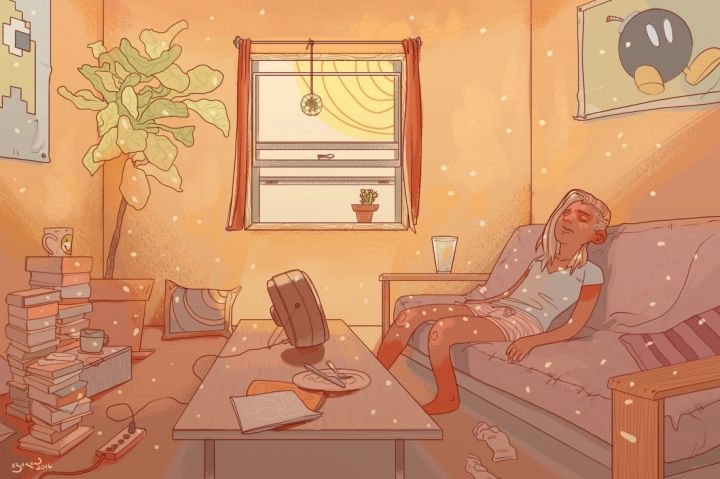 Use smart strategies for climate-controlled interiors

Denton Vandersteen, senior commercial systems engineer in the Power Smart program at Manitoba Hydro, sums up the secret of cool interiors in one phrase: “Minimize the load.”

The “load” is anything that makes a room hot – incoming solar heat or using electricity. Use lower-energy appliances such as toaster ovens instead of conventional ovens – or cook inside as little as possible.

Closing the blinds on windows that face south, west, and east will also keep the sun’s energy out during the day.

Hydro also recommends turning off lights or switching to LEDs.

“A 100 watt incandescent light bulb is 100 watts of heat. You have five of them, it’s like running a 500 watt heater in your apartment,” Vandersteen says.

By using an exhaust fan while cooking or showering, one can expel hot, humid air before it spreads.

When it is hot during the day and cool at night, opening windows in the evening will bring cool air in and push hot air out. On stagnant nights, placing fans in or near the windows helps create a nice cross-breeze – and a breeze alone makes people feel cooler by evaporating sweat. By keeping the blinds drawn and windows closed the next day, one can keep the heat out.

But this doesn’t work once the nights stay hot. For those with air conditioning, Vandersteen says it is time to batten down the hatches. “You’re better off just being sort of like a submarine captain. Just don’t open windows anymore.”

For those without A/C, it’s better to open one’s windows, “so at least the place isn’t hotter than it is outside,” Vandersteen says.

Use air conditioning – and keep it well-maintained

“It’s going to be loud as hell, but it will work,” Graveline says.

“If you’re just getting a window shaker, don’t spend a lot of money...Just get a base model.”

Buyers can find air conditioner guidelines online. As a general rule of thumb, Graveline says that 12,000 BTUs can cool about 600 square feet of living space.

“Don’t turn it off when you go to work, then turn it on again when you get home,” she says. “Leave it 2 or 3 degrees higher than is comfortable all day long. You will actually save energy.”

An air conditioner must also be in good repair to remain efficient. In particular, the condenser, or outside part of the unit where heat is released, should be kept clean.

“Clean your condenser,” Graveline says. “Cover it up in the winter, if possible. Don’t let it get covered with ice and snow.”

Owners can use garden hoses to clean their A/C units, but “you can’t rip the fins, you can’t flatten it out, you can’t puncture it in any way – that would be really bad,” Graveline says.

When it’s really hot in Winnipeg, the city has extended hours at libraries, pools, splash pads and other city facilities where people can cool off.

“Don’t stay in your apartment if you’re overheating,” Chang says. “Go somewhere cooler, cool down, for sure. Go to the grocery store. Go to Safeway.”

-Styrofoam cooler (or other large container that can be cut)

1. Cut a hole in the middle of cooler’s lid, big enough for the fan to rest on.

2. Cut two holes towards the sides of the cooler lid.

3. Put frozen water bottles or ice inside the cooler.

4. Close the lid and turn on the fan.

The fan will draw hot air in through one of the side holes. There, it will be cooled down by the frozen water. With nowhere else to go, it will then leave through the other hole. Presto, cold air!

“You can do it for less than $20. And that is a huge benefit when you are suffering. Ice or frozen water is not going out of style.” - Natasha Graveline, HVAC Technician