House Handshake is a band that believes in togetherness. Most of them share a home as well as a musical journey.

They say the reason they live together is because of the importance of caring and communication within a band unit.

“I really think there is this unmeasurable effect to the music when the love is strong,” Quinton Poitras (guitar/lead vocals) says. 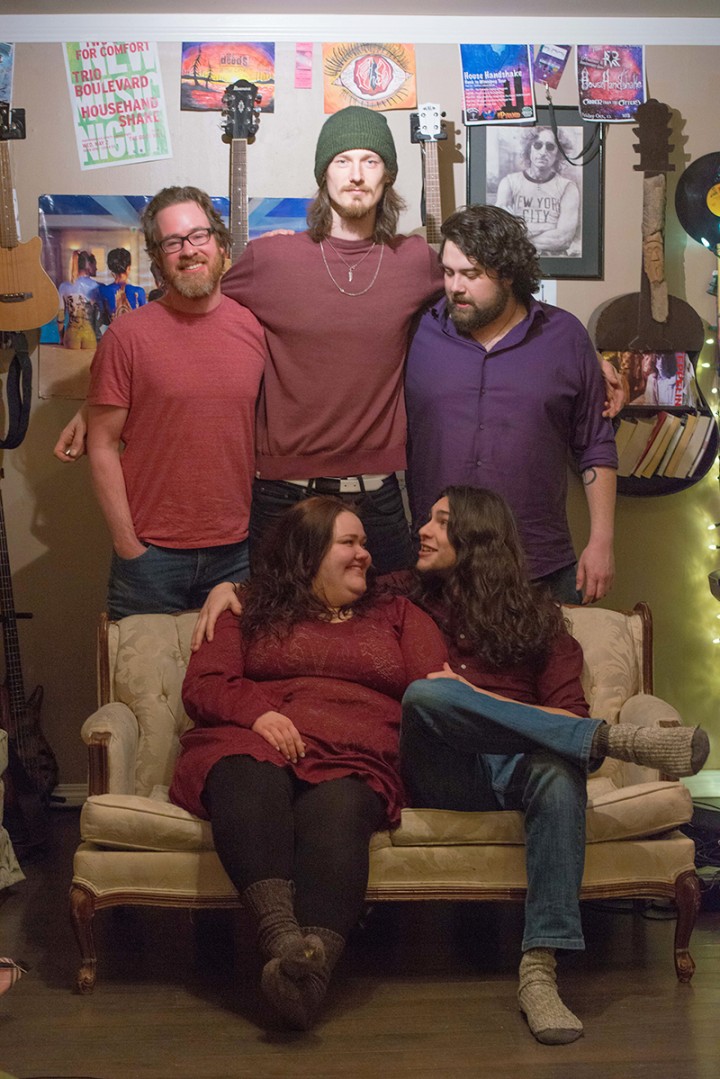 “When you work and live together, I’m sure it can go bad easily, but we don't sweep anything under the rug. We talk about everything and make sure no one is having some kind of hidden feelings,” he says.

House Handshake’s music also has a collective spirit. Five of the six members write their own songs.

“We’ll write, and when it’s really barebones, we’ll bring it together for input and constructive criticism,” Darrell Anderson (bass) says. “We try to work on them all together, right from the beginning.”

And the name, House Handshake, also comes from living together. It refers to a shared house and a regular visitor who had a special handshake, dubbed the house handshake, according to Darrell Anderson (bass/vocals).

The band describes their sound as “joyful sensual indie folk” on their website. Poitras says the reason is that “the six of us draw influence from all over. It’s hard to pin down a real genre.

“I’ve heard people call it R&B, country, rock, pop. We love live bands with a low production element, sounds that are natural and raw,” he says.

House Handshake started in Vancouver with Anderson, Poitras and Sarah Greco (lead vocals) living together and forming the core of the band, but they decided to move back to Winnipeg for its music scene.

“We knew that the music scene in Winnipeg is thriving and really has the community aspect to it, whereas Vancouver was kind of cutthroat,” Russell says.

“We love to share and support (Winnipeg musicians’) work and share knowledge with each other about our industry, so we can all grow together,” Poitras says. “It’s easy to get involved, and people are eager to collaborate.”

The band has six musicians, including Tate Hiebert (lead guitar), Tanner Link (keys) and Brennan Saul (drums). Although the original plan was for five members, an unfortunate occurrence brought about a blessing.

“When I broke my wrist in the summer and we were jam packed with shows,” Poitras says, “I asked (Tate) to play my guitar parts, and he learned it all in two days. When I got out of my cast, we just couldn’t let him go, so now we’re a six-piece!”

The band is hardworking. They performed 45 to 50 gigs last year, according to Anderson, who says that the reason for the busy schedule was “just trying to make an impact on the city when we first started.”

The band was thrilled to find out they had been nominated for the Fiver. “When we found out we were nominated, Sarah and I jumped for joy in our kitchen,” Poitras says.

House Handshake releases its first EP, House, on Friday, Feb. 8, with another EP due later this year and a full album next year.

Find out more at househandshake.com.