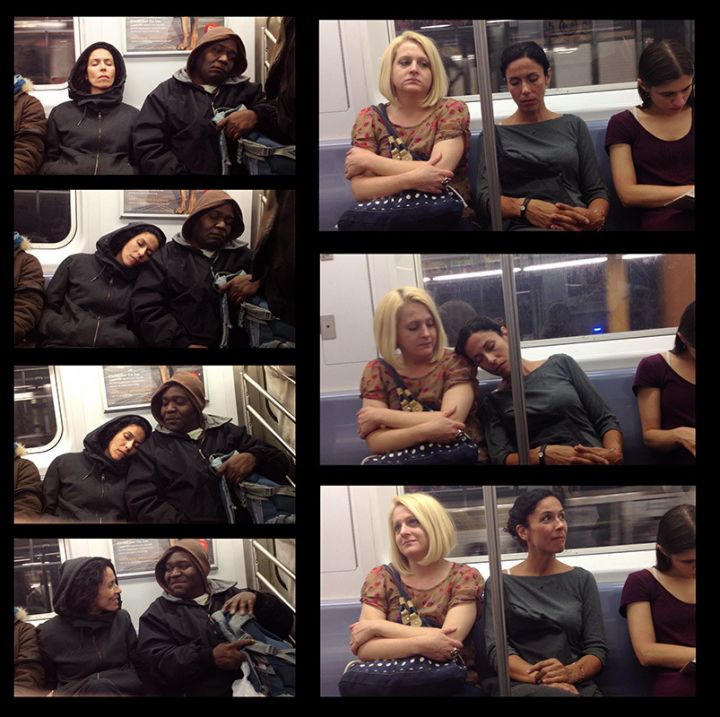 We’ve all had that uncomfortable bus experience when someone rather eccentric sits next to us and strikes up a one sided conversation. These are the moments in our day that many of us dread and try to avoid by keeping our dependable headphones on at all times. But have you ever wondered why this feeling of avoidance seems to overwhelm us in such situations? It appears to be a normal human reaction, but some people, myself included, believe that it is one we should fight. Brooklyn artist George Ferrandi spins this widespread view on human interactions in her ongoing project, It Felt Like I Knew You.

Ferrandi attempts to open up our minds to the idea of a special kind of connection between strangers. In her thought-provoking experiment she joins the many other people that ride the New York City subway system, and when she begins to feel comfortable to the person who is sitting next to her she rests her head on that person’s shoulder. She has a friend document people’s reactions in photographs. The responses differ greatly from person to person. Many become uncomfortable and some even leave, while others just smile and continue reading the newspaper. Escaping this situation would be considered normal, but maybe we should all wonder why that is.

Perhaps it’s just cautiousness that creates this reaction, but we must not let this be a reason to isolate ourselves. We continue to push people away simply because of a predisposed notion that most of the people we come across in our daily lives will merely remain strangers to us. I like to think that every stranger is a possibility; a possibility to help someone, a possibility to be helped.

Of course, I’m not immune to the natural reaction to avoid the unfamiliar, but I am aware that this is a conclusion I often jump to prematurely. We need to realize that sometimes we’re meant to feel out of place, we’re meant to feel emotionally exposed. It is through this uncomfortable small talk that we connect and relate with people.

Ferrandi reminds us that this human connection must go both ways. She speaks of the physical space between two people and how it alters as they become more familiar with each other.

“When the space palpably changes, and I completely feel like the stranger sitting next to me is my friend, I rest my head on that person’s shoulder” Ferrandi says. She soon realizes, however, that this physical distance may stay the same “stiff and guarded space between strangers” because many people cannot help but surrender to their discomfort.

Normally the person falling asleep on your shoulder would be considered the strange one, but maybe we need to reconsider our idea of weird. Perhaps being weird is a good thing. Being weird does not always mean creepy. Sometimes it just means being open to the awkward things in life. So the next time someone sits next to you on the bus, just say “hello.”

Tessa Gauthier is studying psychology at the University of Winnipeg. She is skilled in sarcastic remarks and awkward encounters.