Throughout film history, German cinema has continued to astound and delight world-wide audiences. The 60s and 70s gave birth to New German Cinema, directors Rainer Werner Fassbinder (Berlin Alexanderplatz) and Wim Wenders (Wings of Desire) would dominate during the era.  Though there is no formal name for the kind of German films being made in the 21st Century, it seems they have not lost any steam. Modern filmmaker Margarethe Von Trotta, a former actor during the New German era, appears to be a hit among critics. Her latest film Hannah Arendt is getting international acclaim.

Von Trotta’s film is a biography of Hannah Arendt, a German Jew who was an apprentice of well-known philosopher Martin Heidegger. They had a romantic relationship which fell apart once the Nazis came into power, with Arendt going on to become an active supporter of Jewish causes. The film is essentially an account of her report for the New York Times on the war crimes of the Nazi Adolf Eichmann.

For those who have never taken a Sociology class, Arendt’s report would conclude with the shocking “Eichmann fallacy”, which basically states that many Nazis were not anti-Semitic “monsters” but people just doing their jobs in a dog eat dog society. This is incredibly relevant, Von Trotta could have released Hannah Arendt 70 years from now and it would have deep emotional resonance.  The director does a great job at portraying just how important Arendt was to her society, and how controversial her work would be.

Barbara does a great job at playing the intriguing philosopher, but the script she is given is sometimes substandard. Too often are characters introduced and then forgotten about midway through the film. It also seems like Arendt’s relationship with Heidegger wasn’t dissected enough, one would imagine that was an important time in her life. Regardless, the film is quite thought provoking and does raise interesting questions that will stay with the audience long after they leave the theatre. 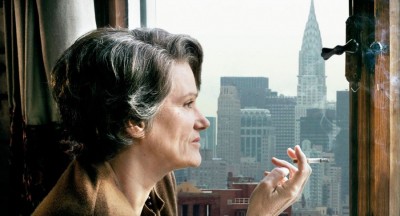