The gimmick of raunchy puppets can only go so far. The novelty of a felt hand puppet saying or doing something vulgar doesn’t go very far, either. Past works of art that have used this trope successfully did so by understanding that they need to do more than just have puppets swear and screw. Avenue Q and Team America: World Police used the medium to create subversive satire, for instance.

In the case of Hand to God – writer Robert Askins’ play about a Christian puppet ministry in Texas that’s forced to confront a demonically possessed hand puppet – it’s remarkable how little satire, subversion or even shock value there is to be found.

Askins zeros in on obvious targets that, on a surface level, are culturally labelled provocative. American fundamentalist Christianity, teenage sexuality and demonic possession all have the potential for funny and interesting examination.

This is why it’s so disappointing that Askins doesn’t have much of anything to say about religion, sexuality, violence or any of the topics his play is ostensibly about. What he is interested in is the plot, which involves a teen boy and his widowed mom (elements which, along with the Christian puppet ministry, are autobiographical details from Askins’ own life). It’s a plot that doesn’t have much humour beyond the crude puppet jokes or much heart of any kind.

It’s a shame because all of the hallmarks of Royal Manitoba Theatre Centre are still on full display here, and the company’s typical high standards of production remain intact. The sets and costumes nail the look and atmosphere of a church basement.

The performers all pull their own weight. Tom Keenan pulls double-duty as both the teen protagonist Jason and his demonic puppet, convincingly having many arguments (and even a physical fight or two) with himself. The always great Cory Wojcik plays a pastor with romantic ulterior motives. Wojcik is a smart enough performer to know to root himself in the character rather than play for laughs.

Unfortunately, technical proficiency can only go so far in elevating lacklustre writing. Askins’ script betrays the performers’ instincts to let humour flow from character rather than jokes because he, as a writer, doesn’t seem to have a sense of his characters as people. They function merely as vessels for laughs, except when they don’t. Then they’re vessels for emotional story beats. Askins doesn’t realize his characters can’t deliver on either if they aren’t three-dimensional human beings.

What we’re left with is a valiant effort on the part of the talented cast and crew to wring what little blood they can from this stone. Perhaps the greatest sin (pun not intended) that Hand to God commits is that it’s not even so bad it’s offensive. It’s merely dull in its mediocrity.

If a play about demonic puppets can’t be funny, it should at least be able to provoke a visceral reaction. Despite the clear talent onstage, Robert Askins can’t hit that meagre softball. 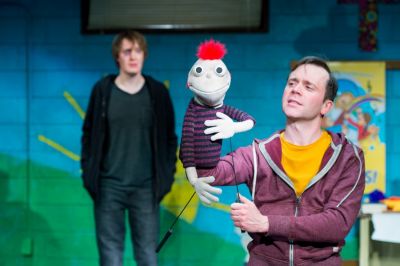