Christianity and film are usually at odds in some way or another. Too often are well meaning Christian directors subjected to protests at their premieres because other followers of the same religion are upset at their slightly different world-view. When Mel Gibson’s Passion of the Christ was released, many Catholics were upset at his incredibly violent depiction of Jesus’ crucifixion. To avoid controversy, many directors play it safe; sticking to more traditional and favoured opinions, rather than asking questions and seeking alternative answers. Director Brad J. Silvermann’s (No Greater Love) newest picture Grace Unplugged strongly leans toward the safe side.

The film stars AJ Michalka as Grace Trey, a devout church-goer who wishes to be a pop star just like her father. With some help, Grace eventually reaches the stardom she has always wanted. However, with each step into the spotlight there is more pressure to compromise her values and strain her relationship with God. Will Grace reject her faith or grow stronger?

Grace Unplugged strives really hard to be a traditional Christian movie, the kind that would be recommended on your local church bulletin board, and due to this, loses its artistic soul.  The drama never picks up any steam; something slightly bad happens to Grace, but in the next scene the problem is dealt with. A young man named Quentin tells Grace to keep God in her thoughts, and suddenly she is fine.

Silvermann has made a film that is overly sentimental, preachy and terribly made. The acting is atrocious; I’ve been more moved by a blind monkey with Tourette’s than from AJ Michalka’s performance. The characters are not only one dimensional, but they’re far too good to like, even in the “dark” moments of the picture (Grace refuses to sing about a one night stand - Heaven forbid!)  The film doesn’t go too deep into Christian philosophy either, just the same old “God is good”. Perhaps the film could appeal to a deeply religious family, but as a serious work it needs to be vastly improved. 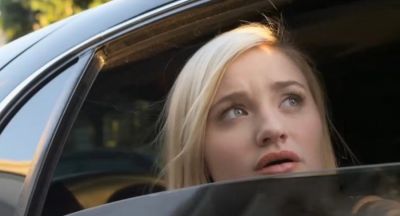