Get the Winnipeg Look

Your guide to local fashion and fashionistas

For those who gravitate toward beauty and fashion, Winnipeg can feel like a stepping stone on the way to a more glamorous city like Toronto, Montreal or Vancouver. But The Peg is in the midst of a makeover montage as local style icons embrace its humble vibe and lead the way in flaunting it.

“I still feel like we could be considered a little bit behind,” Sarah Brooker, freelance makeup artist and fashion designer, says. “But I feel that we are getting stronger, bringing styles to the forefront and showcasing them in beautiful ways without being stuck under this ‘we’re not a trendy city’ title that we’ve all felt a little suffocated from.” 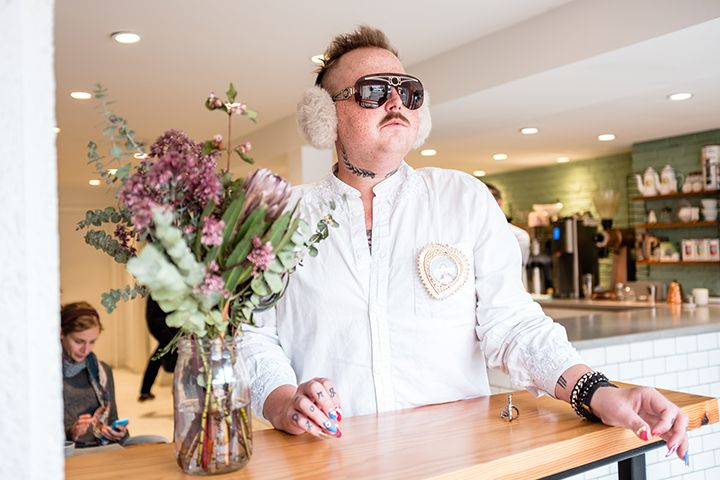 Andrew Henderson has moved from conventional beauty aspirations to a more experimental aesthetic.

A haven for personal style

Kiera Fogg, the entrepreneur behind boutique business Little Box of Rocks, has recently met more people who are making a long-term home here.

“I’ve heard from a lot of my peers that they had intended to move away but decided not to because of what our city is becoming,” she says.

The social media boom of the early 2000s is a contributing factor to the growing interest in personal style locally.

“We have way more fashion bloggers than we ever did,” Lili Lavack, designer and fashion show producer, says. “Since Instagram came out, everyone is very focused on self-image, whereas before when it wasn’t a thing, people didn’t think about themselves that much because they didn’t see themselves.”

Lavack also sees the city’s influx of fast fashion shops as playing a part in our current style climate.

“We have retailers that are more fashionable and easy access like Forever 21, H&M,” she says. “Before we were very limited with our options.”

Stage manager and event organizer Andrew Henderson echos Lavack’s theory and adds that an expansion in beautiful venues and cafe culture has been an influence on locals.

“We have more spaces to be glamorous in,” he says, noting he feels the Human Rights Museum has put Winnipeg on the international map, making it a point of pride.

“I think people are starting to feel that Winnipeg is a worthwhile place now. Before it was seen as just ‘winterpeg.’ People would say ‘oh it’s a hell hole’ or ‘the murder capital,’ all these things ... now I think we’re finding our own and stepping out in stride.”

Henderson developed his own brand of fearless glamour when personal tragedy encouraged him to indulge his flamboyant side.

After moving to Toronto 10 years ago, Henderson returned to Winnipeg when he was diagnosed with terminal lymphoma. “So now I’m back … where my family is and just kind of living out my days,” he says.

“I stand out in a crowd, but it’s great.
I get lots of compliments,” he says. In the past, Henderson says he put a lot of effort into looking beautiful in a conventional way, aspiring to have a fit body and a simple, clean silhouette.

As he matured, Henderson found himself “embracing weird shit and finding unique pieces.” After his diagnosis, his appreciation for attention-grabbing looks has been heightened.

“There’s less of a reason to not wear something. These rules that were constructed … throw them right out the window,” Henderson says.

More mix and match than mannequin

While not everyone is as adventurous as Henderson, he reflects the Winnipeg aesthetic in that locals aren’t typically going to put together the kinds of outfits a store mannequin might wear.

“If people are going to buy something from a chain here, they are going to pair it with something else,” Lauren Feuer, assistant manager at The Gap and fashion enthusiast, says. She describes a typical Winnipegger’s style as kitschy, ironic and homegrown.

“We embrace finding things in the unexpected,” Feuer says. “It’s the thrill of the find.”

“The style here is definitely more creative,” Henderson says. “There’s more soul to it, there’s more character. In Toronto, everyone looks beautiful and fashionable, but they all kind of look the same.”

Lavack says because Winnipeggers went so long without access to popular brands, they may be craftier than people in other cities.

“Let’s take Grandma’s sweater and stitch it up a little bit,” she says. “I wouldn’t say that we start trends, but we are definitely our own spirit … we’ll follow, we’re aware of what the bigger cities are doing. But we’re going to do it the way that we want to do it.”

Brooker agrees Winnipeggers love to thrift shop and adds that they have a growing desire to support local and buy original pieces from artisans. She refers to the lineup at the last Third + Bird Market as an example.

“People thought there was a car accident,” she says. “It’s a great start. That they were on such a mission to get there and shop locally that they were willing to wait in this massively huge lineup.”

Staying loyal to the local

Winnipeggers have a sense of loyalty Fogg experienced firsthand with Little Box of Rocks.

“Winnipeg is an amazing market in that when we like something, we tend to embrace it wholeheartedly,” she says.

“Fashion in Winnipeg is about the people. When it improves, it’s the people improving it and not so much the infrastructure,” Feuer says. She adds she would like to see moves toward strengthening the city’s existing areas to elevate a local shopping experience.

“When we build here, we tend to move outward instead of inward. My hope for the city would be to build a shopping area with a few brand name stores.”

Feuer feels The Exchange District has made a good start in this direction with local businesses working alongside larger names like Kit and Ace.

“All the shops in The Exchange are encouraging each other rather than competing,” she says.

Lavack regularly puts together shows that embrace this sense of community and put a variety of local shops in the spotlight. A notable example is Fashion on Ice, a recent addition to Festival du Voyageur. Fashion on Ice is a truly Manitoban experience where models and local personalities show off the latest in winter wear while strutting down the frozen Red River.

Though it’s cold for so many months out of the year, Lavack says Winnipeg has been slow to see winter as a time to be fashionable, which is what sparked the idea for the show.

“We were limited in what we wore. It was literally that parka and a toque, and I was like ‘there’s gotta be more. We are creative in Winnipeg,’” she says.

Lavack has seen a lot of enthusiasm around the show as people embrace the colder temperatures and find individual ways to have fun with it.

“People are so excited about winter fashion now,” she says. “They can’t wait to see and to explore with it. In Winnipeg, you have no choice. Wear your parka but still have your cute boots. You have to have those little elements that make it you and trendy.”

Winnipeg may be the less cool sibling to a few more internationally recognized Canadian fashion hubs, but it shines as a city when it incorporates that underdog quality into its aesthetic.

info Want to see more from these fine people?