It’s odd to think of a tale about two Olympic gold medal winners and a millionaire as a story of outsiders, but Foxcatcher is exactly that. It follows the true story of Mark Schultz (Channing Tatum) and his older brother Dave (Mark Ruffalo), who both triumphed at the 1984 Olympic games.

Years later, the brothers are reluctantly recruited by millionaire John DuPont (Steve Carell) to train at his historic Foxcatcher Farms in Virginia. John adores wrestling and plans to coach the Schultzes back to Olympic glory.

As played by Carell, John’s a frigid, socially maladroit oddity, repellent both in behavior and appearance. Sometimes he’s creepy. Other times he’s unintentionally funny. It’s the most reserved, precise performance of the former comedian’s career.

Raised by his disapproving mother, Jean (Vanessa Redgrave) in the sheltered enclave of the farm, John grew up surrounded by thoroughbred horses and fox hunts. His infatuation with the lowly sport of wrestling continually clashes with his mother’s elitist tastes. Despite Carell’s Best Actor Oscar nomination, DuPont is mostly a supporting player to the Schultz brothers.

Ruffalo’s screen time is disappointingly limited, as Dave’s repeatedly yanked away from his brother by nagging familial duties. Tatum plays Mark as a sullen, teenage caveman, always scowling at the world with ape-like posture. Both are admirable, but pale in comparison to Carell’s flashier DuPont.

Foxcatcher is an unnerving, calculated and incredibly subtle film that ends in violence and tragedy. However, audiences expecting emotional fireworks will surely be left unsatisfied. Director Bennett Miller (Capote, Moneyball) boldly stages scenes that last mere seconds and hinge entirely on understated body language. Viewers getting up for popcorn mid-movie will inevitably miss something crucial.

In the end, the story feels somehow incomplete. Individual moments are astonishingly powerful and evocative, but they don’t add up to much. It’s a shame, because there was so much potential. Yet, I suppose the same could be said of the brothers Schultz. 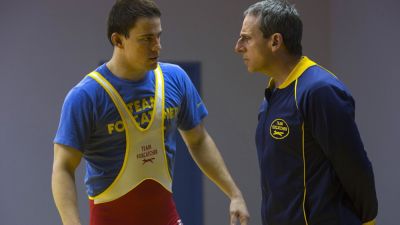