Klein’s book mobilizes a war metaphor for the climate crisis

On Sept. 29, a virtual book tour for Seth Klein’s A Good War: Mobilizing Canada for the Climate Emergency will make a stop in Winnipeg, along with musical guests Decades After Paris.

In the book, Klein, puts forth an argument that leaders and citizens must treat the ongoing climate crisis with the urgency of war. Drawing from public policy and mobilization tactics, he notes parallels between the Second World War and the climate crisis, urging Canadians and policy leaders to treat the latter as the emergency it truly is. 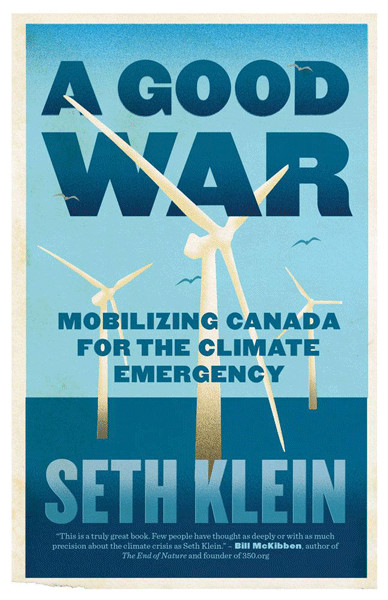 As the executive director of the Climate Action Network Canada (CAN Canada), Catherine Abreu attests to the need for emboldened leadership in order to fight climate change but says Canadian leaders have consistently fallen short.

“The way that governments communicate about climate change needs to fundamentally change in order to feel like it’s the ‘whole of society’ project that it needs to be,” she says. This would include leaders regularly “coming to the mic” to discuss and give updates on the climate emergency response, similar to the style of Canadian leadership during the Second World War.

Solutions to the climate crisis are often placed in the hands of the individual, urging people to recycle, go vegan or even reconsider having children for the good of the future. However, building national solidarity, whether it be to mobilize troops or aid in the climate emergency, is a collective effort.

Through Klein’s war metaphor, one can imagine the garnering of public support through leadership as jointly applicable to the climate crisis. On the other hand, Klein says the “top-down” approach leaders took during the Second World War left out many crucial voices and experiences, especially those of Indigenous communities.

“It’s going to have to be collaborative this time,” Klein says. “For people to mobilize, they need to feel like everyone is in, regardless of income, gender or race.”

The COVID-19 pandemic has given insight into governmental ability to rapidly mobilize funds and other supports through programs like the CERB, something both Klein and Abreu say justifies the argument that the same could be applied to the climate emergency response.

“We’ve seen the mobilization of huge amounts of investments that were previously kind of unimaginable in order to save lives,” Abreu says. “That’s what we need in the climate crisis.”

“The premise of the book was that we needed a historic reminder of how quickly we can change,” Klein says. “Here we all are living that in real time.”

Register for Klein’s virtual book launch on Sept. 29 at 7 p.m. at sethklein.ca.