The far-right: what it is and how to stop it

Many people rang in the new year of 2017 in a state of shock. The events of the previous year set the proverbial table for a hostile cultural and political landscape.

The United States presidential election resulted in a win for Donald Trump, a candidate championed by neo-Nazis, the Ku Klux Klan, white nationalists and far-right world leaders like Vladimir Putin and Geert Wilders. The British far-right’s successful push to leave the European Union resulted in a months-long wave of hate crime across the United Kingdom.

Nationalist, anti-immigration or neo-Fascist political parties in Germany, France, the Netherlands, Greece, Hungary, Sweden, Austria and Slovakia all experienced major wins. And, adjacent to all these events, online harassment perpetrated by racist “alt-right” trolls reached new heights, both in terms of depravity and visibility.

In short, the far-right is having a bit of a moment. This crisis raises two questions: what does the rise of neo-fascism mean locally, and what can Winnipeggers do to stop it? 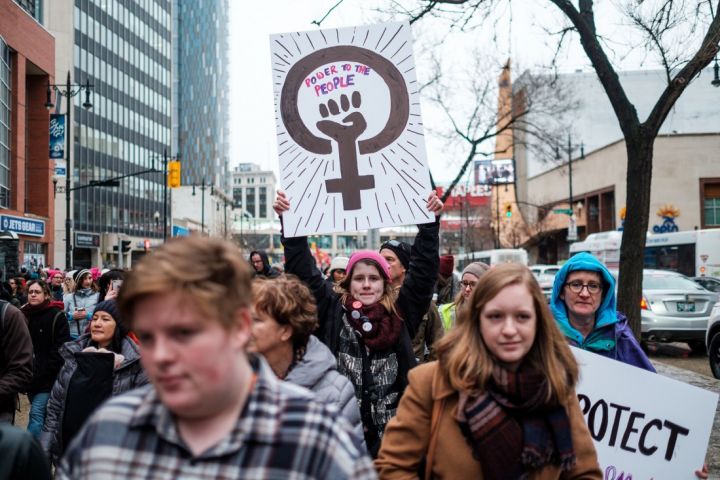 On Jan. 21, 673 marches to protest Donald Trump - including one in Winnipeg - were held in 32 countries.

The global reach of the phenomenon has had local repercussions.

On New Year’s Eve, a family in Wolseley were targeted by neo-Nazis, who left a rock painted with a swastika and anti-Semitic slogans in a gift bag on the front steps of their home.

The posters directed to a website for a Winnipeg-based group calling itself European Consortium. While the website has since been taken down, a search using the Wayback Machine, a digital archive of the World Wide Web, shows that their website displayed white supremacist hate speech as early as March.

That’s not to say there haven’t been local countermeasures to the new far-right as well. Winnipeggers took to the streets on Jan. 21 in one of hundreds of worldwide marches in solidarity with the Women’s March on Washington. Organizers of the march said an estimated 3,000 participated in Winnipeg.

The march, initially organized as a Washington, D.C. event to protest Trump’s election, spread like wildfire. According to organizers, a total of 673 marches were held in 32 countries. While early reports estimated that 2.6 million people marched worldwide, newer numbers place the turnout between 3.3 and 4.6 million in the United States alone. 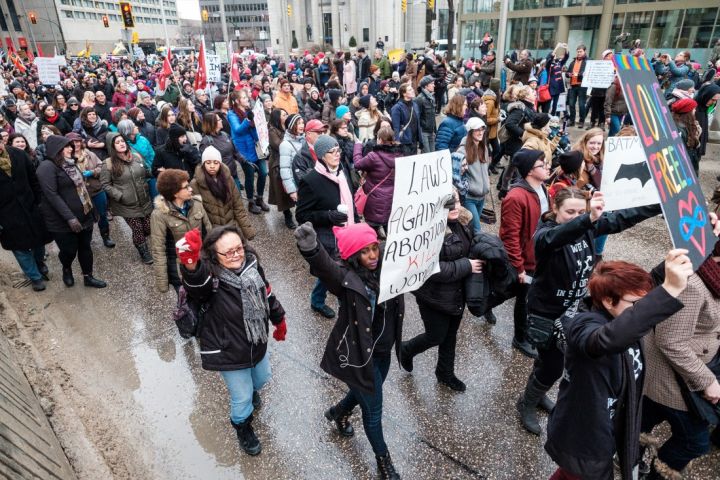 Marchers in Winnipeg challenged changes that could potentially be made to U.S. law.

As memes go, so goes the nation

One of the key tools used by the alt-right is the spread of viral image macros, colloquially referred to as “internet memes.” The group’s tactics were so effective as to transform the previously innocuous cartoon character Pepe the Frog into an officially recognized hate symbol.

Guelph-based climate justice activist and software developer Adrian D’Alessandro hosted a workshop at the University of Guelph on Jan. 21 called Graphic Design: Intro to Meme Making for Agitators. The purpose of the workshop was to teach activists how to access and utilize free graphic design software to create their own image macros with positive activist messages.

D’Alessandro says he’s paid attention to the way white nationalists have used memes to shift public perception of extreme right-wing views for the past decade.

“(Alt-right memes) are a mechanism of affecting the ‘Overton window’, or the range of things that are permissible to talk about in society,” he says.

“The alt-right uses memes to readily infiltrate the discourse perceived by the average person. This allows them to silence people who disagree with them and shift the Overton window so that conversations about nationalism and anti-multiculturalism become normalized.”

Memes, according to D’Alessandro, can be an effective vessel for message of anti-fascism.

“For anti-fascist movements, and the left in general, memes need to be utilized as a way to make their often complex analysis of systems accessible to individuals,” he says. “They need to be utilized in a way that moves the voices of resistance on the front lines to a more general audience.” 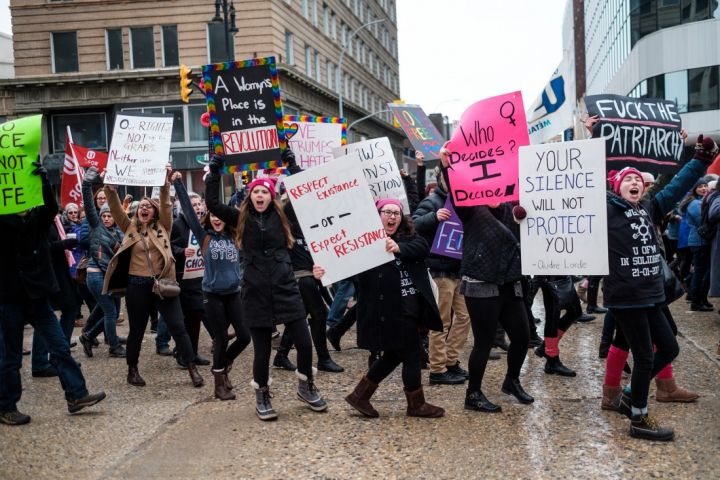 The marches held on Jan. 21 are part of a larger protest trend that has been growing since the 2008 finanical crisis.

Dr. Matthew Flisfeder, assistant professor of rhetoric and communications at the University of Winnipeg (U of W), says there are economic, political and cultural reasons for the recent surge in racist and neo-fascist activity. He cites the 2008 financial crisis as one of the economic factors.

“We did see a wave of (leftist) protest movements and resistance in the years following (the crash),” he says.

“The Occupy movement was significant for directing attention to the capital-class dynamic-pointing the finger at Wall Street, the language of ‘We are the 99 per cent’ – of existing global power and the cause of the 2008 crisis. However, it failed to produce any kind of lasting alternative to the existing and therefore reflected the impotency of the left.”

Dr. Paul Lawrie, an associate professor of history at the U of W, says these economic anxieties are a recurrence in many historical examples of far-right movements.

“You can look at the populists of the late 19th and early 20th century,” Lawrie points to as an example. “It generally began as a left-to-centre movement, but morphed into the ‘America First-ers’ of the 1920s through the ’40s. It turned into a right-wing populism that was anti-cosmopolitan, anti-immigration and flourished at a time of deep economic anxiety.”

“It’s naive to think these movements can be eradicated,” Lawrie says. “They’ve always been there. But they can be marginalized through programs and platforms that genuinely address economic anxieties and tensions.”

Flisfeder says Trump and the alt-right share many qualities with older forms of fascism, including shifting the anger over financial woes toward marginalized targets.

“(Fascism) recognizes people’s discontent, but rather than addressing the core problem, it displaces it. Usually, for right-wing populism, this means putting the blame on a false image of an enemy or intruder who disrupted the system.”

One example of false enemy imagery was the anti-Semitic representation of Nazi Germany.

“For the alt-right, this enemy has multiple identities,” according to Flisfeder. “On one hand, it’s formed through standard racism and sexism. But on the other hand, they’ve targeted particularly politicized groups.” 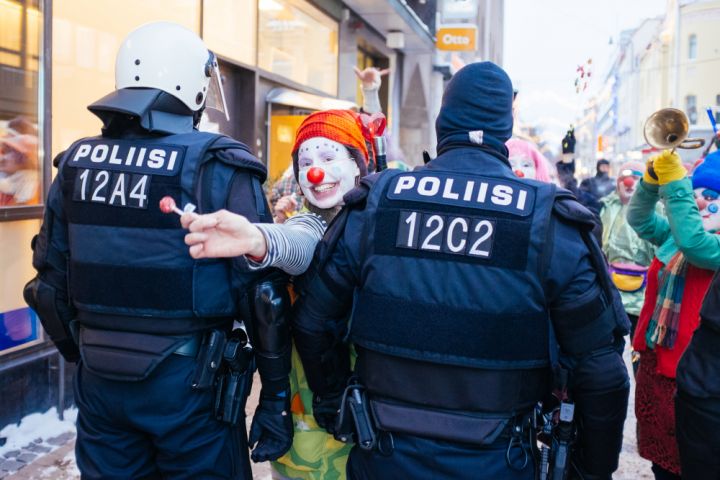 Loldiers Of Odin, a group of clowns founded in Finland, have organized as a way to speak out against fascism and "bring people joy, displace darkness and abolish anxiety."

Flisfeder says targeting politically active segments of marginalized groups is a way for fascists to present their targets as the oppressors, not the oppressed.

“Take feminism, for example,” he explains. “The alt-right is not only misogynistic. It specifically targets the politics of feminism. We saw this with the ‘Gamergate’ fiasco.”

“Gamergate” is the term used by the alt-right to describe their ongoing campaign of targeted harassment against women videogame journalists, while claiming that they’re merely concerned with “ethics in game journalism.

“Targeting movements rather than people creates the appearance that Left political movements are figures of dominant authority,” Flisfeder says.

Michelle Falk, executive director of the Manitoba Association for Rights and Liberties (MARL), says these disinformation tactics are extremely damaging.

“They’ve essentially adopted the rhetoric of human rights against the very principles these ideas were developed to protect,” Falk says.

“There’s a misconception that these groups have been ignored by rights-based initiatives because they see equitable action in place for minority groups but fail to recognize the hidden benefits offered by their privilege. The misappropriation of human rights de-legitimizes real struggles for those who need protections and exacerbates the needs for those protections from this counter-movement all the more.”

Lawrie cautions against using the term “alt-right” at all, saying it has a twofold negative effect.

“(The term ‘alt-right’) has a danger of legitimizing views that are not ‘alternative’ conservatism but are intrinsically abhorrent,” Lawrie says. “But it can also allow those of us who may be on the left of the political spectrum to tar and feather our political opponents without nuance and understanding.” 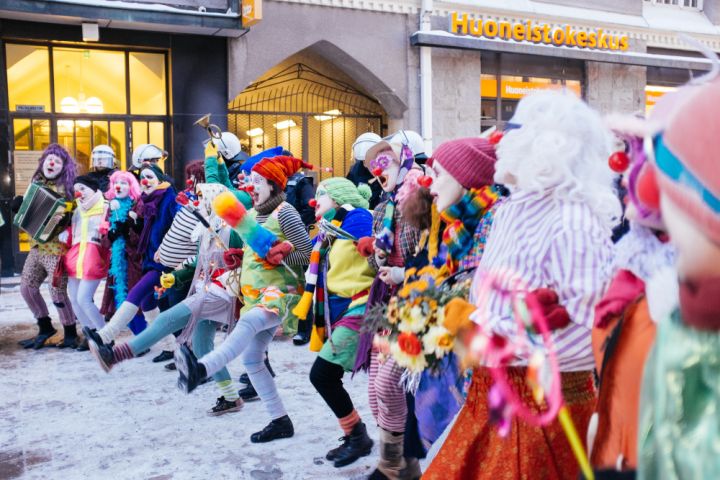 The Loldiers of Odin's name is a play on the alt-right group Soldiers Of Odin, which has chapters around the world.

Lawrie says it’s important to draw distinctions between more traditional conservatives who vote for far-right candidates like Trump and the hate groups emboldened by his rhetoric.

“I would never want to draw a line that says, ‘conservatives are just neo-Nazis in sheep’s clothing.’ They’re definitively not. When looking at the quintessential, economically-depressed Trump voter, it allows us to blind ourselves to their real and legitimate grievances by consigning them to, ‘You’re just an alt-righter. You’re a racist and a homophobe.’”

Falk says education is the key to stemming the tide of racist and neo-fascist movements.

“Our goal at MARL is to address these misconceptions before they begin,” she says. “We offer workshops in schools to students as young as Grade 5 in an effort to curb misunderstanding before it becomes engrained.”

One such workshop, titled “Power and Privilege,” helps elementary students understand white, straight and cisgender male privileges and how they affect other populations.

“We teach students how to be an ally to minority rights groups, how to approach others with empathy and understanding and what avenues for action are available to them.”

Internet education is one such avenue of action. While the jury is still out on whether rambling political rants on Facebook actually make any difference, the internet has been the epicentre of the alt-right’s campaigns of harassment and disinformation. 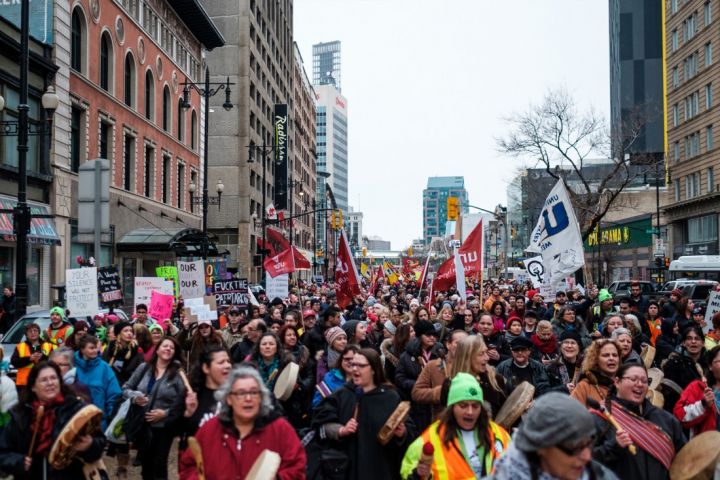 An estimated 3,000 people took to the streets in Winnipeg in protest.

Breaking down the divides

While rhetoric abounds on the internet, there are many more chances to change minds in face-to-face interactions.

“For the last few years, MARL has been involved in organizing ethics events for high school students and the wider community to bring critical thinking to the forefront of discussions on human rights and social justice,” Falk says.

“Asking the right questions, I think, is a skill even more powerful than having the right answers. These events are intended to bring people together to debate and discuss important issues in a fun and safe space (rather than) bashing our heads in engaging with trolls online.”

Another avenue of action, Falk says, is volunteering with organizations designed to help marginalized groups.

“Volunteering is great,” Falk explains, “because not only are you helping nonprofits with the import work they do, but you’re also stepping outside your comfort zone and meeting people who wouldn’t necessarily run in your circle.

“There are hundreds of agencies in Winnipeg that work with newcomers, Indigenous peoples, women, the LGBTTQ* community, religious minorities, people experiencing unemployment and people with disabilities that need help and support from volunteers.”

Lawrie says while education is important in combatting prejudice, it may not be as effective as merely breaking outside our respective bubbles and broadening our social horizons.

“I think all the forms of segregation we engage in, whether it’s residential, social, along racial or gender lines, only exist to separate us. Organic integration and association is, I think, a far more effective tool than simply education.”

Lawrie says, historically, humans are motivated by self-interest. But “self-interest” can still manifest in altruistic and empathetic ways.

“If the people we know, the people we love, who we work with exist beyond those barriers, it provides an immediate, visceral counterweight (to hate). Because we’ll say, ‘I know (that generalization) isn’t true!’ Some might call that anecdotal, but I think it’s profoundly human. It builds a bridge.”