Joseph Gordon-Levitt is a charismatic actor with a wide range of films in his repertoire. He began his career in the 80s, acting in made for TV movies like Stranger on My Land. His big break came in 1996 when he played Tommy Solomon on the hit television series Third Rock from the Sun, showing that he had the comedic skills to act alongside John Lithgow. After the series ended Levitt was given more prominent roles and rose to become an A-list star in Hollywood.  Recently he has decided to become a writer and director as well; with Don Jon being his feature length debut.

Levitt’s film is a satire, mocking a society obsessed with sex and the degradation of the opposite sex. Both the lead character and his love interest, played by Scarlett Johansson, are incredibly shallow human beings who cling to ridiculous expectations regarding love, much like many of us do. The director carefully examines the media’s responsibility in shaping our outlook on life and transforming our relationships for the worse.

Unfortunately Levitt’s picture is a walking contradiction. Despite his insistence that romantic comedies are terrible for society, his film becomes a romantic comedy itself. Unlike the nauseating sex addict from Steve McQueen’s 2011 meditation on sex culture, Shame, Don Jon is a jerk but he’s a likeable charismatic person that you can’t help but empathize with. This really doesn’t help the picture at all, in fact many men are going to come away from the film thinking that Don Jon’s womanizing ways were cool.  Joseph Gordon-Levitt dares to question our ethics, yet does so in a way that reinforces unrealistic relationships. 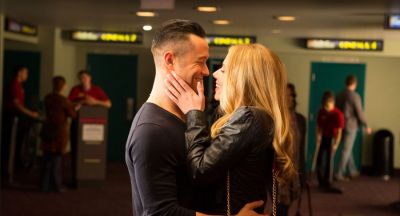