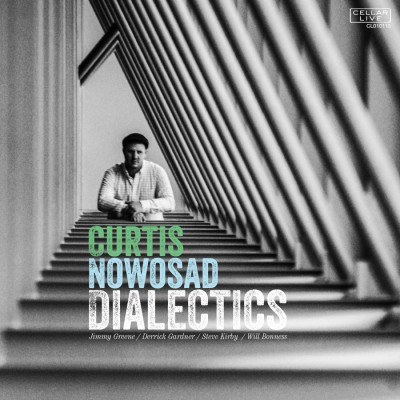 Winnipegger Curtis Nowosad, who now lives in New York, came back to Winnipeg last June and recorded Dialectics, the followup to his 2012 debut, The Skeptic and the Cynic. Nowosad enlisted his old bandmates who all have ties with the University of Manitoba jazz studies program. Steve Kirby's bass, along with Nowosad’s fluid drumming anchor the jazz ship along on the journey through six original tunes and three covers.

The opening track, “See No Evil,” is a bouncier, faster version of the Wayne Shorter composition with Jimmy Greene's saxophone and Derrick Gardner's trumpet intertwining nicely throughout the track. The band also covers Thelonius Monk's early '50's number “Bye-Ya.” With its latin vibe, pianist Will Bonness sets the mood for a rhumba underneath Nowosad's blending of African and Cuban style drumming.

The CD ends with “I Remember You” (music written by Victor Schertzinger with words written by Johnny Mercer.) The lyrical version has been covered by Doris Day, Slim Whitman, Nat King Cole and even Bjork. The instrumental version here is very reminiscent of Charlie Parker's 1953 version.

The musicians are tight as they wind their way through the CD, allowing everyone’s contribution to shine equally.