Cult classics take off in Winnipeg

With photos from Jennifer Doerksen

Winnipeggers love their cult classics. David Knipe, Cinematheque’s operations manager, thinks such films are popular because the artistic community has an oddball sense of humour.

“It’s the (same) ironic, self-deprecating humour we have about ourselves,” Knipe says. “Cult films usually denote a certain style or genre, something out of the mainstream.”

Cinematheque is the theatre hosted by the Winnipeg Film Group (WFG), an independent centre that provides distribution, exhibition and production equipment for local filmmakers. Cinematheque often screens films that are outside the bounds of mainstream media, including cult films.

“Our programming reflects a desire for classics that have gained a reputation and a following as cult films,” Knipe says. 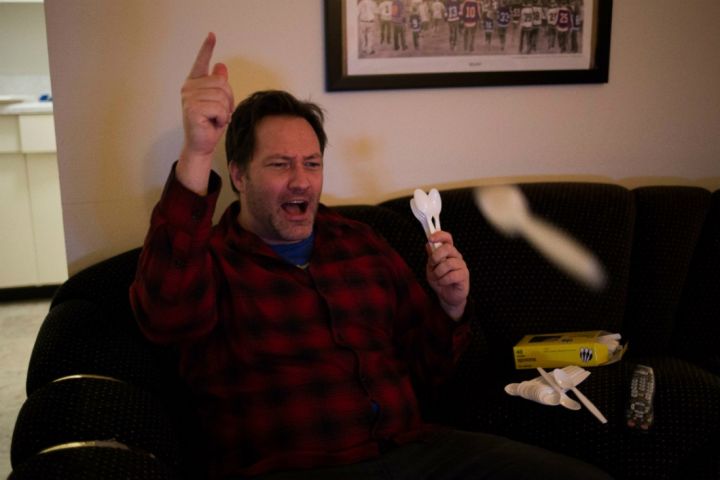 Matt Abra watches The Room at the Park Theatre every September. “It’s an example of a really bad movie that gained a cult following because it’s so fun to watch,” he said. Abra brings spoons to throw at the screen during the Park Theatre screenings. Sunday, October 1, 2017.

Winnipeg has a particularly strong tradition of experimental cinema.

The Handsome Daughter is another venue where aficionados can catch cult screenings.

“A cult classic is a movie that everyone knows about,” Terrance Williams, event coordinator at the The Handsome Daughter, says. “They’re often horror, sci-fi or violent films.”

The films tend to be highly visually stylized with oddball or dark humour. Williams explains that audience participation is a large part of the screenings.

In anticipation of the return of the Twin Peaks TV series, WFG hosted an event where they served coffee and cherry pie, staples of the show.

The Handsome Daughter has been hosting cult classic screenings since last Halloween. The event was so popular that they decided to have a movie night every month.

“We have costume contests and games, and people will scream out lines along with the actors,” Williams says.

In order to create some hype leading up to screenings, WFG has been producing short videos that they show as commercials at Cinematheque a few weeks before an event.

“They’re these funny and irreverent commercials that show what’s coming up, done in the style of the film,” Knipe says.

Knipe explains that while only certain films garner a huge following, it would be difficult to run out of options for cult classics. The largest factor for choosing which film to show is the public’s interest.

“There’s a balance between us enjoying it and needing to get an audience out,” Knipe says. “Either way, it makes it a fun experience, instead of a commercial experience.”

“You can’t plan a cult film. The audience decides that, ultimately,” Barber explains. “Hollywood can try to calculate a cult film, but you can’t do that. It has to be natural. It has to be real, somehow.”

The WNDX festival, which takes place Oct. 4-8, includes a few films in the cult genre.

The Garrick Hotel will screen Phantom Of The Paradise on Oct. 11 and The Park Theatre will show The Rocky Horror Picture Show on Oct. 29.