It may have taken ten years and $217 million, but the University of Winnipeg may have finally filled in its “moat.”

Prior to 2006, when construction of the Richardson College for the Environment was announced and millions of dollars started flowing into the University from the private and public sectors, the U of W’s development practices tended to keep the community out.

The inwardly focused institution balked on commitments to local stakeholders and promises of community access with the construction of the Duckworth Centre in 1983, leaving the community feeling burned.

“They tried to sell it as a community fitness facility that’d be available to the community, and then they built it, and it’s built like a brick fortress that basically keeps the community out,” Jamil Mahmood, executive director of the Spence Neighbourhood Association, says.

Within a year and a half of opening funding for community programming within Duckworth was cut. It’s no surprise locals residents were skeptical when the University embarked on its most ambitious development kick.

Since 2006, the U of W has invested approximately $217 million into the downtown and west central neighbourhoods and has expanded the campus footprint by hundreds of thousands of square feet. Most recently the UNITED Health and RecPlex opened its doors to the university community and the public.

“Having a world-class sports facility in our neighbourhood and then not be able to use it would be a tragedy,” Mahmood says.

But according to Mahmood, between 500 and 600 community members have accessed the RecPlex since opening thanks in part to a community charter mandating space during critical hours and a shift in attitude within university administration. 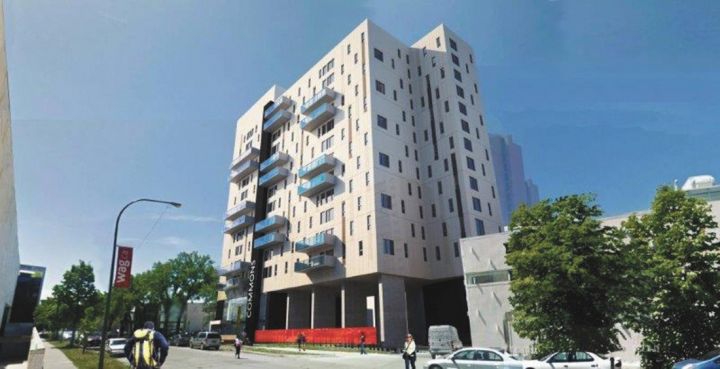 “A credit to the university admin, they worked really hard to make that happen,” Mahmood says of the community charter. “So that was one of the big steps that the university showed that they were willing to function in different ways.”

Dr. Annette Trimbee, vice chancellor and president of the U of W, says the university’s development spree in the inner city stemmed from a desire to open its doors to the community.

Development was strategic in that the University hoped to engage the local indigenous, immigrant, and refugee communities as well as expand standalone master’s programs. These goals came before the expansive buildings, though the two are closely connected, says Trimbee.

Under the direction of the University of Winnipeg Community Renewal Corporation (UWCRC), a unique non-profit development agency, the U of W’s latest housing initiative is underway. Construction at 320 Colony St. has begun on a 14-storey, 112,000 square foot, mixed-use housing complex titled University of Winnipeg Commons. The building will have 46 affordable units and 56 market-priced units. The UWCRC will act as property manager for the facility.

According to Trimbee, taking on the role of landlord and real estate developer is in line with the purpose of the University and is another step in reaching out to the community.

“Students need places to live. The University of Winnipeg is very accessible by bus and there are a lot of students who would like to live downtown and we do need housing downtown,” Trimbee says.

By working with the city, the community and the province, Trimbee says the U of W is helping revitalize downtown while ensuring other stakeholders are benefiting from the development.

“We’re being a good partner, and a lot of universities, especially the downtown urban universities, get the value of that very powerful connection,” she says.

Brent Bellamy, creative director and architect with Number TEN Architectural Group, says it is the role and responsibility of universities to be catalysts for positive change within cities, and says the U of W is a perfect example.

“You can see the catalyst effect that’s going on,” Bellamy says. “There are tons of restaurants all of a sudden around that area and student services that are happening beyond the original U of W block. It’s having a transformational effect on that part of downtown.”

According to Bellamy, universities can actually help build a better city by bringing diversity, stability and energy to
the downtown.

“I think the worst thing that ever happened to Winnipeg was in the ‘50s when the University of Manitoba decided that it needed to be out in the country,” he says.

“They used to be on Broadway in front of the Legislative building – if you could imagine what the city would be like with the University of Winnipeg and the University of Manitoba right beside each other, and the catalyst of energy that would be there with 45,000 students populating that end of town.”

And while an increased post-secondary presence in the core could change the dynamic of Winnipeg’s downtown, Trimbee says the U of W has to remain mindful of its size. Following the completion of the University of Winnipeg Commons, development will likely slow, but may not halt completely.

“We need to always be intentional about what we’re doing,” Trimbee says. “So I wouldn’t say that (development is) over but I can also say that I don’t have a great long list of things on my mind.”

The University’s developmental focus may shift in the coming years, from one of capital improvement to social and academic engagement.

“We brag about the role we play in downtown renewal and we talk about $217 million and I want to get past those numbers, to what those buildings mean and the positive impact that the buildings have on people,” Trimbee says.

“The core of our operations is all about faculty, students and staff. It’s about education. You need capital to support that endeavour but you can’t let capital drive it.”

Part of the series: The Urban Issue 2015

University of Winnipeg’s 10 years of development

• Richardson College for the Environment and Science Complex at 599 Portage Ave.

• Buhler Centre at 460 Portage Avenue houses the Faculty of Business and Economics and Professional, Applied and Continuing Education.

• Asper Centre for Theatre and Film on Balmoral includes the addition of two new acting studios, a film studio, editing labs and a state-of-the-art flexible theatre.

• Convocation Hall, located inside Wesley Hall,  was fully restored in 2007.