Interactions between the two vehicles not well planned out in Winnipeg

With photos from Anastasia Chipelski

Navigating Winnipeg streets on a bicycle is getting easier, however, some supposedly bicycle-friendly elements of the infrastructure are still bad news for cyclists.

Diamond lanes, which are reserved for buses and cyclists during peak hours, offer “less congested routes during peak traffic times on major commuter roads,” according to an interview with Mark Cohoe of Bike Winnipeg in Metro Winnipeg. While it is certainly not worse than riding in a road crammed with cars, is the partnership of bikes and buses really a working solution? 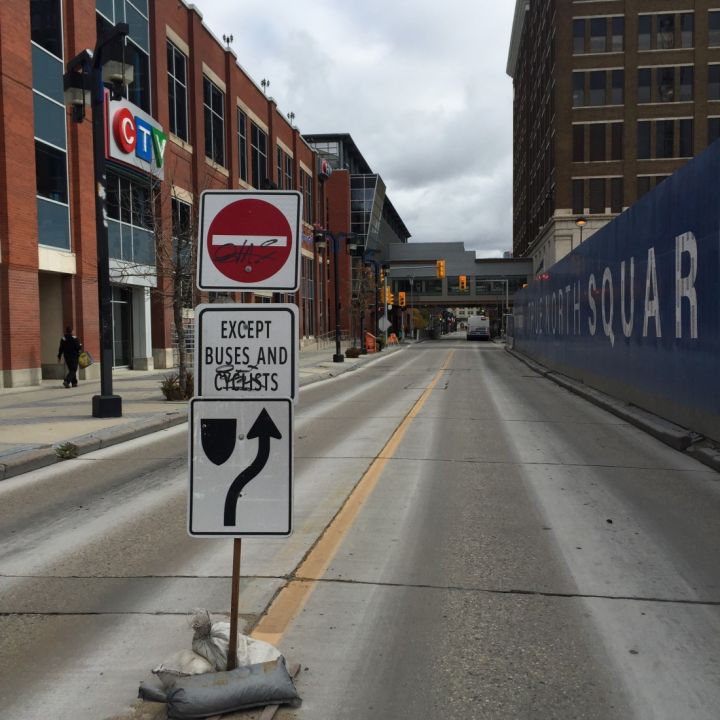 A section on Graham Ave. is set aside for buses and cyclists only.

What bikes and buses have in common (aside from the fact that neither are cars) is a mystery.

As a cyclist, one benefit of sharing the road with a bus is that they are too large to weave and dodge around you as some cars will do. But that doesn’t mean that the bus/bike pairing is safer or more complementary in any other way.

On average, buses travel faster than bikes but stop more often. They travel best when they can zoom from stop to stop, a practice idealized in our one Rapid Transit bus-only corridor. Bikes may travel at a consistently average speed but don’t accelerate as fast as buses. They also benefit from less frequent stops, as acceleration is powered by the cyclist’s own physical effort.

Yet in a shared diamond lane, one is inevitably going to be stuck behind the other. Either the cyclist is left waiting behind a bus at every stop and forced to adapt to an inefficient stop/start pattern, or a bus is stuck creeping along behind a cyclist, slowing down their schedule as they wait for the bike to reach its cruising speed.

Shared bus/bike routes sound fine in theory, but in practice, they can put cyclists in danger. For example, a new bicycle lane on southbound Maryland creates an unnecessarily antagonistic relationship between the two modes of travel. 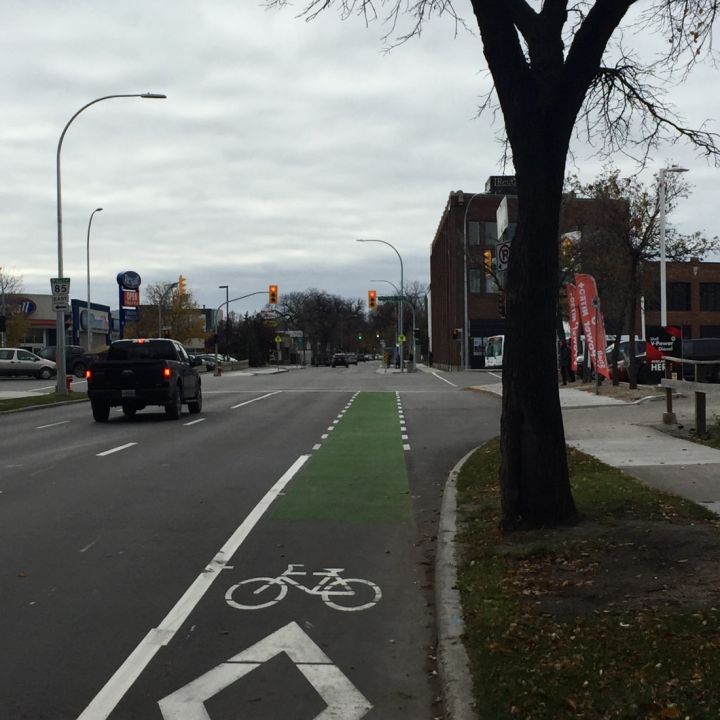 While crossing Portage, buses must cross over the bike lane to the right to access the stop, then pass in front of the bikes mid-intersection once again to return to the left-hand side of the bike lane. 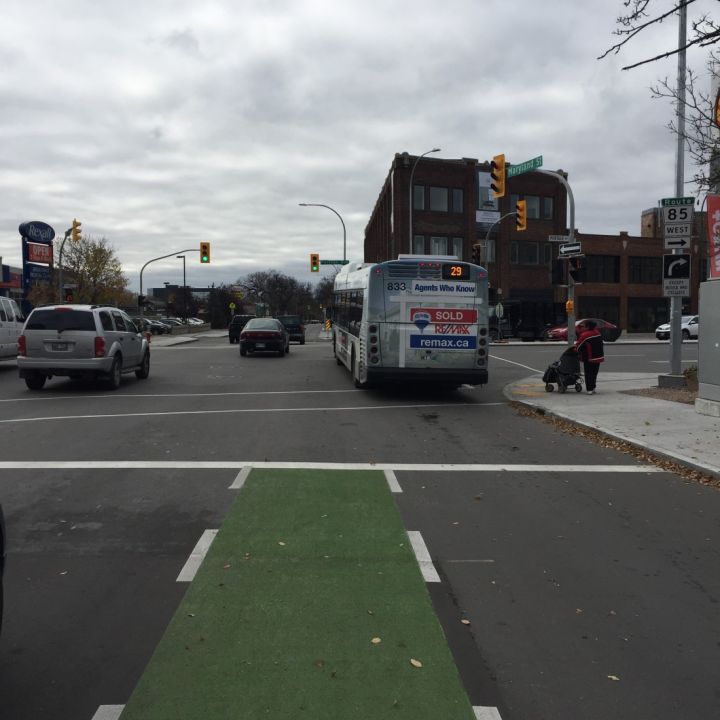 This intersection is designed in a way that the bus must cut off cyclists in the bike line once the light turns green.

Along Graham Avenue, another stretch of road has been designated as a bus-and-bike only corridor. This is a main thoroughfare for many bus routes, and many stop every block or so along Graham. This often results in a long bus convoy inching along Graham.

If a cyclist joins this convoy, they may find themselves in a holding pattern immediately behind a huge, smelly, hot bus, with another behemoth directly behind them, sometimes only inches from the back tire. It’s hardly a situation that instills confidence and a sense of safety.

Other cyclists have noted that this route is far from optimal. In an opinion piece for CBC, David Garvey writes that “Graham Avenue is purportedly for cyclists and buses but that may be the worst option of all, unless one enjoys being surrounded by buses and exhaust while waiting for rush-hour passengers to load and unload.”

The Graham Avenue roadway is also a prime example of the wear and tear buses bring to the roads. Due to their relatively larger mass, buses can wear down roads faster than cars or bikes. The side-effects of heavy bus use on roads designated to be shared with bikes, such as increased cracking, rippling of concrete and potholes create obstacles directly in cyclists’ paths.

Recently, it was suggested that a third party – taxis – be added to the mix. This is based on a study commissioned by the taxicab board. In response, Cohoe and Bike Winnipeg finally brought the concerns of cyclists into the discussion, invoking the safety risk created when cars weave around cyclists. Yet the safety of bikes in the presence of buses has not been discussed much, if at all, in Winnipeg.

Our city could learn from conversations happening elsewhere. Both safety concerns and the differences in speed inform transport strategies in the the Netherlands, where bus lanes do not also incorporate bicycles. In Montreal, bus drivers working for Montréal Transport raised objections to sharing lanes with cyclists.

In a piece on the topic of shared lanes published in the Montreal Gazette, other experts have agreed: “McGill University transport researcher Ahmed El-Geneidy has also said combined bus-bike lanes are a mistake, noting buses have big blind spots that make them dangerous for cyclists.”

In the U.K., the Cycling Embassy calls on planners to aim for “homogeneity in mass, speed and direction.” 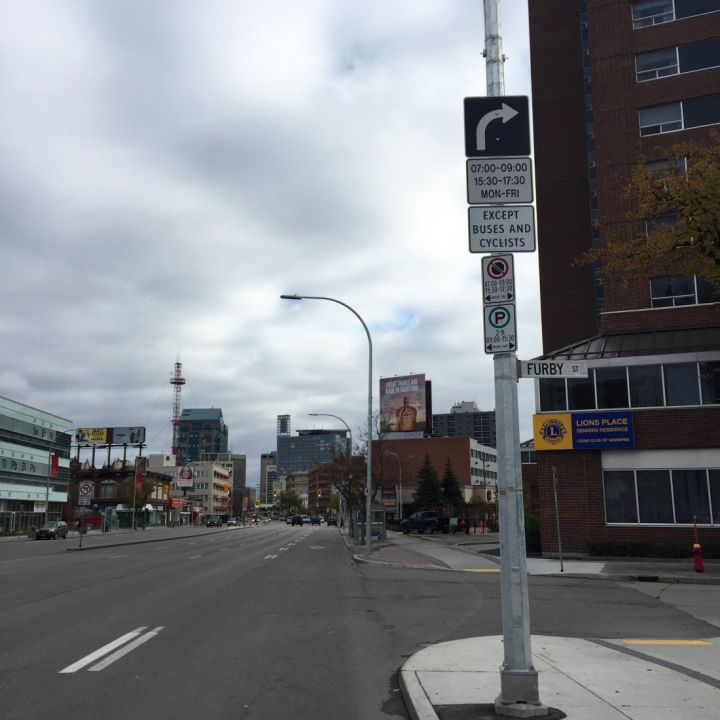 Diamond lanes are reserved for buses and cyclists during peak hours.

Diamond lanes are beneficial to buses and may offer some reprieve from car-based gridlock for cyclists, but they shouldn’t be considered cycling-friendly infrastructure. While city planners are developing transportation strategies, they should seek out feedback from cyclists as well as drivers, transit authorities and the taxicab board. Planners should also incorporate research from cycling advocacy groups into their plans for mixed-use roadways.

Perhaps on paper, both modes of non-car travel seem complementary, but bikes and buses are far from best friends. If each had their own space – diamond lanes for buses and bike lanes for cyclists – we’d all be a lot safer and happier during daily commutes.

Anastasia Chipelski is the Managing Editor at The Uniter.