With photos from Alana Trachenko

When cycling around Winnipeg, safety and security are factors we consider through education on “how-tos” of how to co-exist as cyclists and motorists, wear adequate safety gear and take proper routes while practicing safe biking.

Despite these practices, the Winnipeg Free Press called for a review of road safety after multiple fatal bike crashes, and CBC released a map that shows locations of dangerous intersections, giving cyclists a heads up on where to err on the side of caution. These reports beg the question: are our current infrastructure and cycling practices making Winnipeg streets safe and accessible to all levels of cyclists?

“Unfortunately not. Unless you happen to be an off-road, daredevil trials rider, in which case, I think Winnipeg streets are perfect for you,” Andrea Tétrault, seven-year cyclist, road and cyclocross racer, says. “As far as most people are concerned, roads are for cars, sidewalks are for pedestrians, and cyclists belong on charming country roads in France.”

According to Tétrault, lacking a designated area or proper space on the road for bikers is what has people feeling unsafe.

“Here, bike lanes are minimal, poorly maintained and generally don’t connect with other bike lanes. (it’s) not adequate,” Tétrault says. “That said, while we are still in our infrastructure infancy, there have been some good efforts made. When at the bare minimum a line of paint makes me feel safer, you know there is hope.”

Tétrault says that when looking at cities in other provinces, such as Calgary, Montreal and Vancouver, we can imagine an attainable goal for city development, whereas pining over bike infrastructure in a place like Copenhagen may be aiming out of our league. Copenhagen offers a safe space for cyclists to ride where helmets are not needed, offering a total of 454 km of cycle lanes to the 56 per cent of Danes who commute every day, but Tétrault believes this is not the case in Winnipeg.

“Here in North America, studies show that you are far more likely to get a head injury walking or driving than riding a bike,” Tétrault says. “I prefer to wear a helmet when I ride, because I know far too many people who owe their lives to the fact that they were wearing one. I think of it like a seatbelt – a small inconvenience for some great peace of mind. So much better than a mind in pieces.”

Tétrault says that even with helmets on the mind, she strongly believes there is a direct link between poor city infrastructure and bike fatalities in the city. She says those in charge of our city and it’s planning should lead these development efforts.

“In 2015, city council approved a $334-million active transportation plan, which will involve city planners, neighbourhoods, local stakeholders and hopefully some people from Copenhagen,” Tétrault says. “There are plenty of good, parallel models out there to follow – they just need to look in the right places.

“There is safety in numbers. The more cyclists we see on the streets, the more people get used to the idea that we belong there. I love driving my car, but riding my bike is fun, good for the environment, connects me to my city, is good for my health and makes my ass look great. The benefits far outweigh the risks.” 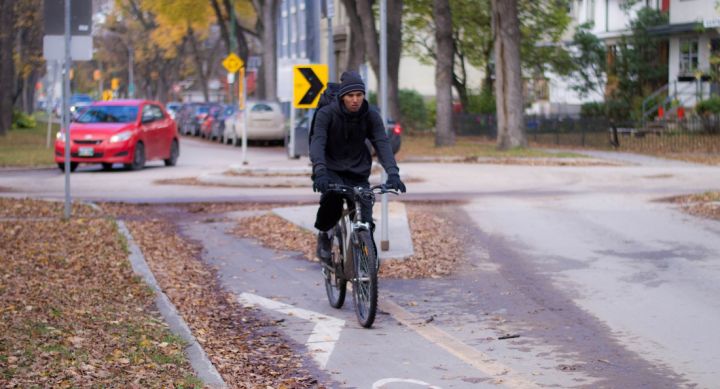 Cyclists don't always have bike lanes to ride in, an issue that has resulted in injury and death.

Infrastructure safety and sustainable transportation have been on the mind since before the 2015 active infrastructure plan, according to Jino Distasio, an associate vice president, research and innovation director for the Institute of Urban Studies.

Distasio was a previous board member at the Centre for Sustainable Transport (CST), which used to be cohoused with the Institute of Urban Studies. In 2009, the CST put cameras on cars and cyclists, following their regular, comfortable routes, to map out early plans for bike paths. Since then, Distasio says things are improving, but we have a long way to go.

Distasio says Winnipeg doesn’t seem to understand the value of investments beyond car-focused road investments, and that any other argument results in long debate in place of action. With the City of Winnipeg’s population approaching 800,000 people, Distasio says the city’s climate is changing and slowly becoming open to significant and progressive infrastructure.

“But I think we’re not quite there. The sticker shock of what it actually costs to be a world-class city, that’s the real piece of it for people right there,” Distasio says. “Other cities are just making a range of investments in other infrastructure projects that are really geared towards creating a vibrant city.”

Distasio fully supports any way to ensure Winnipeg creates a vibrant city with roads that are safe for cyclists.

“I see us fixing medians and street repair, and I always think to myself, ‘can't we just squeeze a couple more inches onto each side of the road?’” Distasio says. “I keep thinking there has to be something we can do as a community to make the roads safer for cyclists, apart from creating separate protected pathways, which I think would be great for me but maybe not everyone.”

Distasio says understanding what the cycling community prefers is the key but also the challenge. In looking at the idea of integrated bike systems versus separate protected bikeways, he believes it really comes down to investment in the proper infrastructure, road awareness and, of course, safety.

“There shouldn't be a fatality for somebody on their bike commuting to work. I don’t think there should be road fatalities period,” Distasio says. “I think what we can do is create a safe environment for everybody. We know that cities are complicated, traffic is complicated, so it’s a hard question to answer. I think the right answer is let's do whatever we can to prevent anybody from being injured on their bike."

“We seem to have a culture of wanting to do something, so I've seen encouraging signs, but let's not take our foot off the pedal, and let's keep pushing.”